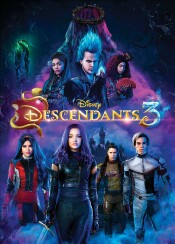 When you guys try to destroy the world, it’s just an error in judgement. But when it’s one of us, it’s lock them up and throw away the key.”

For years now, the only thing my daughter has had to talk about is Descendants. I’ve had to endure the movies; I’ve had to buy the memorabilia. She has even had a Descendants-themed birthday party. So, we can go into this review knowing that good or bad, this film was going to have the Nalyce stamp of approval. Bias, I know, but fortunately we can depend on me to go into the film with my eyes open. Of the three films, this is quite possibly my favorite of the franchise, as it speaks real truth, especially the quote above. That line was spoken by one of the film’s newest addition, the King of the Underworld himself, Hades, who is also a significant character for one of the original cast. I also believe that this addition was the franchise’s most successful film, though that success is marred by the tragic demise of a member of the original cast, Cameron Boyce, who plays Carlos. With his passing, this may also mean the end of the franchise that has become a staple of the modern-day Disney Channel.

To start off, I want to applaud the Disney Channel for finding a way to take classic Disney characters and put a modern-day spin on them for a younger generation. As I said, Nalyce is a huge fan of the films, as well as Mal (Dove Cameron) and Uma (China McClain), who happen to be the series’ strongest characters. This film is no exception, as both characters are forced to overcome obstacles and personal growth.

When we are re-introduced to the cast, Mal and the VKs are visiting the Isle of the Lost to select four new villain kids (VKs) to come to Auradon, reminiscent of when they were selected. On a personal note, Ben, Mal’s boyfriend and King of Auradon has proposed to Mal, which she accepts, thereby solidifying her position as Queen. This causes problems for Ben’s ex-girlfriend Audrey; whose family chastises her for failing to secure her position at Ben’s side. Meanwhile, as the new kids prepare to enter Auradon, Hades attempts to break through the barrier, and multiple powerful artifacts disappear from the Museum. Suspicion immediately falls among the VKs, prompting Mal to make a rash decision regarding the future of Auradon and the VKs. As pressure continues to mount, Mal and her friends find themselves challenges and threats that they have never faced before, but are the threats from the outside the barrier or from inside Auradon itself?

Hades’ line from earlier is the single most powerful line of the series in my opinion. It speaks to a double standard that could be translated to everyday life regarding upbringing. I applauded the film for tackling this valuable life lesson that I made sure that my daughter fully understood: the importance of not judging someone based on where they come from. We are all humans, and we all make mistakes; and when we make mistakes, we want people to forgive us and not judge based solely off that one action. However, despite this valuable lesson, we mustn’t forget that it was spoken by that King of the Underworld, and he is in no way without sin. I mean, all in all, he is still a villain, but here he is shown to be capable of selflessness. At least when it suits him.

Mal also undergoes some growth, as she finds herself faced with pressures that she never thought she would have. In some cases, she is up to the challenge. She doesn’t hesitate to jump into the fire to protect Auradon and her friends, but she isn’t without her own misgivings. She is pretty quick to judge herself without examining he full picture. Ironically, clarity for her comes from the most unlikely of places, Descendants 2’s big bad, Uma (China McClain). It was good to see her back. I was sure that she was finished given her commitment to Black Lightning. It is Uma who shows that a person isn’t just one thing.

Though bittersweet, the future of the franchise appears to be up in the air. That said, if this was the last addition to the series, I am happy. It ended on a high note, and I honestly can’t think of a better way to end the franchise. I’m not definitely saying that this is the end, just recognizing that it very well could be.

Though I addressed it briefly, I want to take a moment to truly address the tragic death of Cameron Boyce. When a young man with his wealth of talent dies, it really is a tragedy. I am very grateful to him, as he has provided years of entertainment to my daughter through his work in Descendants and even before that with Disney’s Jessie. Mr. Boyce ,you will be missed, and I thank you for your contributions to my daughter’s childhood.

Jeremy Butler is a film school graduate of the International Academy of Design and Technology. He is been writing for Upcomingdiscs since 2012; however, movies have played a big part of his life for much longer. Favorite genres include horror, science fiction/fantasy, and comedy. Favorite movies are V for Vendetta, Boondocks Saints, Kiss Kiss Bang Bang, and The Godfather.
Avengers: Endgame (UHD Blu-ray) (4K) Blue Bloods: The Ninth Season