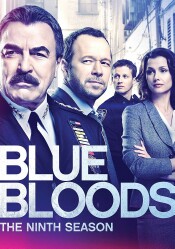 For nine years Blue Bloods has been a staple on CBS, giving Tom Selleck a chance to completely redefine his television career. The once cocky and carefree Magnum P.I. now has established himself as the wise patriarch. It’s a transition that a 1970’s audience would never have bought. But now he’s become a new kind of airwaves icon. The show has also managed to make it through eight years with very little change in the cast, and most of that coming from additions. This season is the first for the show to lose one of the major players and a rather beloved character on the show. Instead of making the season weaker, I think this might well be one of the strongest yet for the series.

Each week there is the traditional case-of-the-week format. The cases get played out pretty much the way a normal cop show might play, and then there is the family dynamic. Cases may cause friction and stress between the family members. Here is where the performances and strong characters make this a very different show from the rest of the police dramas out there. There’s just enough of the mythology arc to keep things interesting. The stories are usually standalone, and you will enjoy this slightly different take on the cop show.

There are some changes coming to the Reagan family. Jamie (Estes) is getting married to another cop, so the family tradition keeps right on rolling. We’re introduced to Eddie Janko, played by Vanessa Ray. She both adds a new dynamic to the family meals and is a bit of a replacement for Danny’s wife. That’s going to be important because Danny (Wahlberg) discovers that his wife’s death was actually a cartel hit, so there’s plenty going on here to shake things up. One of the better episodes also features Danny and his still-strong grief. He ends up having to work with a ghost-whisperer kind of psychic, and of course, the woman is going to be touching that wound. Between his new information and the ghost whisperer, Danny’s going through it all over again, and his family ends up being the thing that pulls him back from the edge. Jamie actually has more going on than planning a wedding this season. He’s promoted and given his own command.

Jamie’s not the only one getting a promotion this season. Erin (Moynahan) gets promoted to Bureau Chief, and it’s going to put her in direct conflict with Frank (Selleck). She’s not afraid to assert her new authority, and it will be a challenge to keep the new work relationship away from those family meals. She’s also trying to navigate the new world of politics and learning she has to make deals in order to get the things that are important to her.

Of course, the season ends with the big expected wedding, and that’s the Season 9 season finale.

You get all 22 episodes on six discs. You get the standard CBS season summary, a gag reel, a feature on NYPD authenticity, a production diary and some fashion promos. It’s a good season. There has been talk of the series winding down, and I just didn’t get a sense of that happening here. The show finds new characters and relationships to keep the unique dynamic alive. Selleck appears to have really found a comfortable role, and I can’t imagine him finding lightning in a bottle a third time. Still, he’s matured as an actor with far more range than Magnum ever had. So “Never say never.”

Gino Sassani is a member of the Southeastern Film Critic's Association (SEFCA). He is a film and television critic based in Tampa, Florida. He's also the Senior Editor here at Upcomingdiscs. Gino started reviewing films in the early 1990's as a segment of his local television show Focus. He's an award-winning recording artist for Omega Records. Gino is currently working on his 8th album Merchants & Mercenaries. Gino took over Upcomingdiscs Dec 1, 2008. He works out of a home theater he calls The Reel World. Favorite films: The Godfather, The Godfather Part II, The Body Snatcher (Val Lewton film with Karloff and Lugosi, not the pod people film), Unforgiven, Gladiator, The Lion King, Jaws, Son Of Frankenstein, The Good, The Bad And The Ugly, and Monsters, Inc.
Descendants 3 Star Wars Resistance: Season 1