Posted in: No Huddle by Brent Lorentson on August 24th, 2019 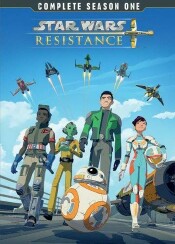 In case you missed it, ever since Disney acquired the Star Wars property they have been milking it for all it is worth.  For kids (and some adults), this has been something to be excited about.  I’ve seen some pros as well as cons since the acquisition took place, and really, I don’t know if I’ll fully make up my mind any time soon considering we still have another Star Wars film coming out in December as well as the live action series The Mandalorian coming to the Disney streaming service soon.  I want to be excited, but after seeing The Last Jedi, I’m a bit nervous.  It was a film I was excited about, one helmed by a writer and director I have a lot of respect for, but I hated that film, something I never thought I’d feel towards a franchise that is near and dear to my heart.  I bring all this up because the first season of Star Wars: Resistance is geared towards kids but also takes place during the events of The Last Jedi.  What I can happily say is that despite a shaky start, the first season of Star Wars: Resistance tickled the kid inside me who first fell in love with the series so many years ago.

When the series opens up we meet a young Resistance pilot, Kazuda “Kaz” Xiono (voiced by Christopher Sean) as he is helping pilot Poe Dameron (Oscar Isaac) get out of a scrap.  Poe is impressed and decides to recruit Kaz to be a spy for the Resistance on the ocean planet Castilon. There Kaz will have to blend in as a mechanic on a refueling station known as the Colossus.  Basically the Colossus is somewhat of a neutral zone where pilots from all over the galaxy can fuel up and enjoy some races.  To be fair, a good portion of the first season is about the pilots and the mechanics on the Colossus; on this planet it seems everyone has the need for speed and claims to be the best pilot in the galaxy.  These storylines in the first portion of the series are hit-or-miss, and to be honest, I was worried where this show was going. After all, we already have seen a Star Wars show with mechanics; was there really a demand for another?

On the Colossus looking out for Kaz is the head mechanic, Jarek Yeager (Scott Lawrence). If you were hoping he’d be the mentor Obi Wan type in the series, well, you’d be mistaken.  While Jarek is critical to the story in some ways, if he was taken out of this story, well, he really wouldn’t be missed.  There is the awkward, bumbling mechanic, Neeku (Josh Brener) who is here for the comic relief; there’s the fan favorite BB-8; then there is the feisty Tam (Suzie McGrath) who wants to be a pilot but for now is stuck as a mechanic.  Sure, there are plenty more characters who come and go over the course of the season, but these are the core roles, and really, it’s bland at first seeing Kaz interact with them, making it obvious he’s new to being a spy, and it’ll be a miracle if he can survive without his cover being blown.

It isn’t till Poe returns to take Kaz on a mission where they investigate an abandoned freighter where things finally get interesting.  Pirates have raided the ship, and the only humanoid survivor they find is unconscious, hiding in a box from a giant alien running amuck on the freighter. It doesn’t take long before we discover she is a pirate, but when she is taken to the Colossus, she does what she can to blend in.  As we finally get to see these characters deceiving one another, the stakes finally are being raised, and this show really starts to get fun to watch.

Running the Colossus is Captain Doza (Jason Hightower) is a character who is fun to watch as Kaz struggles to figure out just who Doza is loyal to.  The First Order is bringing its Stormtroopers to the fueling station, but is Doza working another angle?  When pirates start attacking the Colossus, Doza is given the option to let The First Order give him protection or depend on his racing pilots to be the only line of defense.  Things only get better when we start to see that The First Order has an interest in controlling the Colossus for themselves.

The series is 21 episodes in length, and a good portion of the first half of the season is padding and simply character building.  It’s when the season gets to the episode “Station Theta Black” where the tone of the series shifts a bit, and it actually feels like a Star Wars series.  This episode offers up some fun sequences where Kaz and Poe go up against some Stormtroopers on an outpost that is rigged for destruction.  There are a couple more fun episodes, but then once it reaches episode 14 “The Doza Delima” this really sets up the final portion of the season, and things get really fun from this point on to the point I can forgive the first half of the season being a bit of a snooze-fest by comparison.

My one major complaint has nothing to do with the story, but more to do with the animation.  I understand its 21 episodes all being digitally animated, but there just really isn’t much life to the settings that they take us to.  Considering how many locations we return to over and over again, you’d hope that at least on certain episodes where we go to a new and unique location we couild get something that doesn’t feel so generic. Though to be fair, I did get a bit excited when we finally got to go beneath the ocean surface, but even that lacked in the detail department.

The season does leave us on a bit of a cliffhanger, and I’m honestly looking forward to where things will go from here.  Now that the show seems to have some momentum, I’m hoping they keep the excitement ramped up.  While the front half may be brainless fun for kids, the second half has some good storylines to keep adults hooked and looking forward to seeing what happens next.

Brent Lorentson is a horror writer and film critic based out of Tampa, Florida. With a BA in Digital Film, he co-wrote and co-directed Scavenger Hunt. His short stories have appeared in various horror anthologies. In 2019 his short script Fertile Blood will be a part of the anthology horror film Slumber Party. He is currently working on his first novel A Dark and Secret Place set to be released in late 2019. Favorite Films: Taxi Driver, Fight Club, I Saw the Devil, The Wild Bunch, Dawn of the Dead, A Clockwork Orange, Pulp Fiction, Heathers, The Monster Squad, and High Fidelity.
Blue Bloods: The Ninth Season Ready Or Not