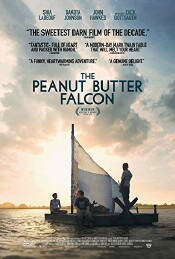 Sometimes the best stories are those that take us on either a wonderful emotional journey or an actual quest of discovery. It’s a rare film that offers both. At its heart, The Peanut Butter Falcon truly can’t decide which of these paths it’s really following. And that turns out to be one of its strongest elements. Part feel-good buddy film, part road picture, Peanut Butter Falcon is all heart. It’s no surprise that the very creation of the movie took a rather unusual route to the big screen. Writer/Directors Tyler Nilson and Michael Schwartz did begin in the traditional way to develop their story. It was a genesis of inspiration that kindled the spark that would become a film. The film’s star is an endearing young man named Zack Gottsagen. He was born with Down Syndrome and has long had a dream of becoming an actor. That’s not an easy dream for anyone to fulfill, but Zack was determined, and fate brought him together with the filmmaking duo. His passion touched them to the point of wanting to make Zack’s dream come true. And that’s where this movie comes from. It was written around the unlikely star from the beginning and might have lingered as a mere passion project for all concerned, but it appears Zack’s drive is infectious both on and off the screen. I get a sense of the real-life determination of the people behind this film, and it’s just as unstoppable as that of the fictional characters they inspired. Real life and fiction are blurred here, and the end result had me believing I was just as much watching a true quest as I was enjoying a film. The Peanut Butter Falcon is an unpolished gem, and thank God for that.

Zak (Gottsagen) lives in a retirement community even though he’s actually a very young man. He has Down Syndrome, and at some point in his young life has become a ward of the state. The state doesn’t really know what to do with him, so he’s fallen through the cracks and living in a situation that frustrates the young man. He’s constantly trying to escape and usually foiled by the well-meaning nurse, Eleanor (Johnson). You can’t keep a good man down, and with the help of his understanding roommate, Carl (Dern) he finally breaks free of his prison. Where will he go? He’s been watching old VHS tapes of a wrestler named The Salt Water Redneck (Church) who promotes his school for wrestlers with promises of learning an impossible and likely mythic move. The tapes have filled Zak’s mind with a dream to meet his idol, learn the moves, and perhaps become a member of the immortal wrestling community.

Along the way he happens to cross paths with Tyler (LaBeouf), who can’t seem to control his own urges and causes a local crabber to lose his equipment in a fire. Now he’s on the run in a stolen boat, and Zak’s his unwitting stowaway. After some awkward moments, these two begin to bond. Zak is too trusting to understand that Tyler is not necessarily a safe traveling companion, and Tyler appears to be bound to help Zak get to the wrestling school at the end of the river a couple of states away. What happens is nothing short of a miracle, and not only for the characters in the film.

It’s no secret to readers here that I have little to no respect for Shia LaBeouf. Haven’t enjoyed a single performance that I’ve seen him deliver. It doesn’t help that his immature antics paint a picture of a human being of no more quality than I have regarded in his performances. But these independent filmmakers managed to wrestle from LaBeouf a performance that is honestly worthy of Oscar consideration. He and Zack immediately form this amazing chemistry, and it’s like two puzzle pieces that have been searching for each other over an eternity. These characters literally complete each other in a way that is quite rare. LaBeouf provides the kind of heart I would never have believed he had in him. And just like his fictional Tyler character, it’s almost as if the actor just might have found something inside that no one could have predicted was there. The best thing I can say about these characters is that I wanted the film to go on much longer than it did. I didn’t want to stop spending time with these characters, and I found myself wishing I could really hang with these guys. There’s an authenticity here that is the real secret of the entire film.

The film includes so much more than just these two performances. They end up building a raft and living off their way. It’s as if Mark Twain had touched the wonderful riverscapes that dominate the quest. The film has the same down home simplicity that Twain once used to dominate the literature of the 19th century. Add to that an underused Bruce Dern as Carl, Zak’s giddy accomplice in escape, and what more could you ask for?

Of course, the film ends in some disappointment for Zak, but with the addition of Eleanor, the three of these characters have more stories to tell, and that’s the hope that you leave the cinema feeling. It doesn’t appear likely that’s going to happen, but the perfect ending allows me to believe that those stories are playing out now as I write these words.

While Zak might have been somewhat disappointed, I’m sure the same can’t be said for Zack. His determination and passion has paid off, and this is no token role or token film. It’s easy to think that when you read how it all came about, but this film has a lot to say, and it’s doubtful that it’s even possible to hear it all with one viewing. I can’t recommend this film enough. They really don’t make films like this any more, and for the sour-grapes filmmakers who cry about comic movies and big blockbusters making true cinema impossible, they need to talk to these guys. I don’t think they think anything’s impossible in my opinion, and for the first time in at least a few years, I might just have to agree with them. So tell me, guys, “What’s rule number 1?”

Gino Sassani is a member of the Southeastern Film Critic's Association (SEFCA). He is a film and television critic based in Tampa, Florida. He's also the Senior Editor here at Upcomingdiscs. Gino started reviewing films in the early 1990's as a segment of his local television show Focus. He's an award-winning recording artist for Omega Records. Gino is currently working on his 8th album Merchants & Mercenaries. Gino took over Upcomingdiscs Dec 1, 2008. He works out of a home theater he calls The Reel World. Favorite films: The Godfather, The Godfather Part II, The Body Snatcher (Val Lewton film with Karloff and Lugosi, not the pod people film), Unforgiven, Gladiator, The Lion King, Jaws, Son Of Frankenstein, The Good, The Bad And The Ugly, and Monsters, Inc.
Ready Or Not NCIS: New Orleans: The Fifth Season