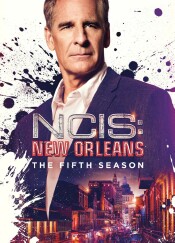 If you are at all familiar with the NCIS franchise, you know that the show tends to follow a bit of a formula. Each spinoff has some unique style aspects, but the episodes tend to be relatively self-contained. That means you can start with Season 5 of NCIS: New Orleans and still be able to appreciate most of what’s going on. You’ll get to know and understand the characters pretty quickly. The franchise has leaned more toward continuous story arcs of late, and NCIS: New Orleans does that more than the others. So while you could certainly enjoy this release on its own, I still recommend you go back and catch up on the first four seasons just to get caught up and maximize your enjoyment. The good news is that we can help you with that. You don’t have to wade through 10 years of Jag, 17 years of NCIS and 9 years of NCIS: L.A., although that might be one heck of a fun binge. Just catch up on the first four seasons of this show and you’ll be ready to go. You can check out those reviews here.

The fifth season begins shortly after the end of the previous season. Dwayne Pride (Bakula) has been shot by the hit-lady Amelia Parsons (Hollman), and he’s in critical condition. He’s fighting for his life while the team tries to deal without him. It’s actually a good episode if you’re new to the series. While you missed the shooting itself, the episode quickly gets you up to speed on what happened. What makes it a rather easy jump-in point is that the crisis allows you to really get to know these characters. How they handle their worry is revealing, and you really get to know Pride because we get to travel inside his head and see moments from his past that helped to form his own character. Meanwhile, you can enjoy getting to know characters the rest of us have gotten to know over those first four years.

No regulars have been lost this season, so you know who they are. Christopher LaSalle is played by Lucas Black. He’s the down-home southern guy. He’s known Pride the longest of the team and functions as his right-hand man. Sebastian Lund is played by Rob Kerkovich and is one of the team’s tech guys. He used to be a morgue assistant who worked closely with the team and is now a fully trained field agent. He’s the more socially awkward team member who has the least confidence in the field. He’s teamed up with a relative newcomer to the show, Tammy Gregorio, who is played by Vanessa Ferlito. She’s a Brooklyn native complete with the accent and attitude. She and Sebastian have a growing chemistry where they love to fight and ride each other. This season when Tammy needs a place to live she moves in with Sebastian, an idea that actually came from the actors themselves, and it leaves even more material for that interaction. She’s an M&M. She’s got a hard, tough shell but is somewhat soft and sweet inside. Daryl Mitchell is the complete tech wizard of the team. He calls himself PPP, which stands for Patton P. Plame. Like Mitchell, he’s wheelchair-bound and a bit arrogant. His character is usually the comic relief, but he gets a heavy episode this season when his best friend is killed because of a spy ring operating out of a veterans’ rehab center. Rounding out the group is CCH Pounder as medical examiner Loretta Wade. She’s also shared a long relationship with Pride, and while not really a part of NCIS, she prioritizes their cases and lends a personal touch. She gets a love interest this season in the form of the show’s long-time director and chief engineer of the Enterprise, Levar Burton.

While no one left the show this season, there are two2 quite large additions to the cast. When Pride finally rehabilitates himself from his near-death experience (more on that later), he is promoted to be the Senior Agent in charge of the Southeast district. That means there needs to be a replacement as head of the team. That position is filled by Necar Zadegan as Special Agent Hannah Khoury. She has international intelligence background, and we learn she’s been involved in a controversial operation in cooperation with the CIA. It’s a mission that will come back to haunt her and the team. She has to find a bit of patience in order to win the trust of the team. It also doesn’t help her that Pride isn’t spending too much time at his HQ desk, but rather keeps inserting himself in the team’s cases. Zadegan does mix with the team well, and I was a bit surprised how quickly she felt like she’d been there all along. She has an estranged family that she has fought to keep safe from the dangers of her job, but there wouldn’t exactly be a lot of drama if it went according to plan.

The other new cast member comes in the guise of Jason Alan Carvell as Jimmy Boyd. The fifth episode is the show’s 100th, and it’s a pretty big milestone episode beyond that magic number. Stacy Keach returns as Pride’s wayward father, and Pride discovers that he has a half-brother. Jimmy’s not so happy with the discovery himself, but as the season progresses the character settles into Pride’s life and becomes his partner at the bar.

The season is dominated by three basic plot points. The first moves this series a bit into the world of the supernatural. Pride’s near-death experience has changed him. He spent some time inside of his mind dealing with a woman who is apparently the Angel of Death. She spends quite a bit of the pilot trying to get Pride to “cross over”. When he finally recovers, he discovers that he’s having premonitions of danger that ends up saving team members and his own life. The Angel, played by Amy Rutberg, continues to appear to him as well. Where are the Winchester boys when you need them?

His pursuit of his would-be assassin leads him to a secret shadow organization that calls itself Apollyon. They are targeting him and his family to retrieve a file that could uncover their activities. Killer Amelia Parsons has the files, and that’s how Pride gets drawn in. It’s no surprise that his quest to bring down Apollyon ends up becoming an obsession that eventually converges with Hannah’s troubles. It’s all leading to a season finale two-part episode that finds the team in the Russian Federation trying to clear both troubles. Thankfully it does not end with a cliffhanger. While certain elements remain open enough that we’re sure to see Apollyon return soon, there’s nothing like last season’s shooting of Pride.

You get all 24 episodes on six discs with some extras that include a celebration of the 100th episode, the traditional CBS half-hour season summary, a profile of the new actress/character of Hannah, and a Q&A that asks questions off the subject. The show has finally found its legs. It has been my least favorite of the franchise up until this point. But it does happen to be my wife’s favorite of the three. I love Bakula, but it seemed that for years they’ve been mixing and matching actors/characters to create just the right team balance. This year I thing they might have finally found a good mix. Now the only question I have is, “What took you so long?”

Gino Sassani is a member of the Southeastern Film Critic's Association (SEFCA). He is a film and television critic based in Tampa, Florida. He's also the Senior Editor here at Upcomingdiscs. Gino started reviewing films in the early 1990's as a segment of his local television show Focus. He's an award-winning recording artist for Omega Records. Gino is currently working on his 8th album Merchants & Mercenaries. Gino took over Upcomingdiscs Dec 1, 2008. He works out of a home theater he calls The Reel World. Favorite films: The Godfather, The Godfather Part II, The Body Snatcher (Val Lewton film with Karloff and Lugosi, not the pod people film), Unforgiven, Gladiator, The Lion King, Jaws, Son Of Frankenstein, The Good, The Bad And The Ugly, and Monsters, Inc.
The Peanut Butter Falcon LEGO DC:Batman: Family Matters (Blu-ray)