Posted in: No Huddle by Archive Authors on August 28th, 2019 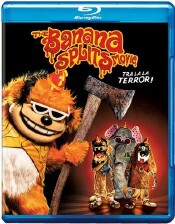 For Baby Boomers, Saturdays in the 60’s and early 70’s meant a bowl of cereal, Saturday morning cartoons, and the Banana Splits. Hanna-Barbera Productions gave us these four silly creatures for fun and entertainment. They were an answer to the Monkees. The characters were developed for Hanna-Barbera by brothers Sid and Marty Krofft, who later became famous for H.R. Pufnstuf. Fleegle, Drooper, Bingo and Snorky were whimsical and fun, bordering on psychedelia. The Banana Splits Show lasted 31 episodes but went on to syndication until 1982. Every episode consisted of a “meeting” of the Banana Splits Club. Their brightly colored set was the clubhouse. They would frolic in their harmless, nonsensical fun at their crazy “clubhouse” in the studio as well as out in public. Along with the usual festivities were comedy skits and songs.

Fast forward to 2019. Director Danishka Esterhazy had a vision to take our colorful, fun friends and combine them with gratuitous blood and horror. It works. Nine-year-old Harley (Finlay Wojtak-Hisson) is obsessed with the Banana Splits. He also believes in fairies, which leads to a lot of unkind reactions from the other kids at school and even his own stepbrother, Austin (Romeo Carere). They think he’s weird. But Harley’s mom (Dani Kind) knows he’s just a little different. For his birthday, she treats him to the ultimate surprise: tickets to a taping of the Banana Splits. Other than Harley, no one especially wants to go, including Harley’s stepdad, Mitch (Steve Lund) and Harley’s best friend, who bails on the birthday event with a fake illness. Harley’s mom reaches out to another child, Zoe, from his class whose mother forces her to go.

As they arrive at the studio lot, they’re told to go to the last studio in the back. It’s old and looks like it has been forgotten by time. There’s a small crowd in line to see the show. At this point we get to meet the other players in the story, a social media couple and a father trying to get his daughter in to show business. We also learn that the network

executives have just cancelled the show, and this will be the last episode. But today’s Splits are not the mascotty, fuzzy friends we grew up with. They are now animatronic. And the show cancellation doesn’t sit well with their programmer, Carl. He re-programs them with a plan to guarantee their future. Thus begins the horror.

Harley and his family enjoy the show as network employees and irreverent fans are gruesomely slaughtered behind the scenes.

The blood and gore is well done but not too realistic. It’s definitely not a movie for kids. The deaths are creative and entertaining for those of us who like horror films. A couple small twists in the story lead to an interesting movie. And Harley has a birthday he and his family will never forget.

If you are a fan of the Banana Splits, this is a must-see. And if you just like horror films, you’ll also find this entertaining, but a little campy. That’s the way the best ones are!

There are some great behind-the-scenes extras including commentary with most major cast members, the executive producer and director.