Posted in: Disc Reviews by Brent Lorentson on August 27th, 2019 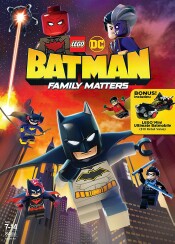 When it comes to Batman, he’s a character you can enjoy in just about every visual medium out there, and there is something out there for adults and even the little kids to enjoy. Personally, I think Batman: The Animated Series is the best adaption out there. I cherish those discs, and I dust off those DVDs plenty just to enjoy seeing my favorite caped crusader. When it comes to the LEGO take on the Batman property they are aiming for a much younger demographic, and that’s fine, so when you watch these films, you do have to keep that in mind. So how does LEGO BATMAN: FAMILY MATTERS stack up against the numerous other adaptations out there? To be fair, it’s somewhere in the middle.

With a running time of 79 minutes, there isn’t much time to waste when it comes to story, and the film pretty much jumps into it.  Bruce Wayne, aka Batman (Troy Baker) is starting to find it cumbersome to play the part of Bruce Wayne the businessman; it seems to just get in the way of his crime-fighting job.  This is despite the fact that Robin, Nightwing, Batgirl, and Batwoman are all playing their part in fighting crime.  It’s at a business meeting where scientists at the Wayne Corporation reveal their new project, Brother Eye, an AI super brain that’s able to make decisions on the fly.  Once Bruce sees what it can do, he decides to just sell Wayne Enterprises so he can focus on being the caped crusader.  It’s a rash and impulsive move that we quickly see the fallout from.

It is Harvey Dent, aka Two-Face, who decides to make the purchase, as he of course sees his opportunity to finally get revenge against Bruce Wayne.  It’s amusing seeing how they handle the dual personality of Harvey and Two-Face, and things get even sillier when we eventually get to see Batman attempt to show that he and Bruce Wayne are separate people.  It’s something that for some reason works well in this film but would never fly in the cinematic universe of Batman.

The main villain here, though, is Redhood, who is working with several of Batman’s more classic villains to attempt to take on the caped crusader and his family of crime fighters.  This plan also involves Brother Eye, who has taken to creating a robotic army that has plans to wipe out Gotham.  Basically there is a lot going on in a short amount of time.  But because of all that is going on, there is plenty of action to keep us entertained from start to finish, which is of course a good thing.

From a visual standpoint, I’m a little disappointed with the look of Gotham here. There was nothing that really stood out or was something I’d call remarkable.  It’s almost as though they borrowed the city design from another film and simply made it darker to save money.  Gotham is supposed to have the dark, dirty, and gritty atmosphere that we just don’t really see here, but that’s something I doubt many kids will complain about.

Here is where my problem rests with the film. Too much of a good thing in such a tight running time, things just don’t have a chance to flesh themselves out to their full potential. Sure, it’s fun seeing the variety of villains pop up, but it just doesn’t make much sense why they are there other than to play glorified henchman for Redhood.  Then there is the annoying bickering between Batgirl and Nightwing about texting. It’s a joke that just goes on for so long it just gets annoying.  But my biggest problem comes with Redhood and his motivations for what he is doing and how quickly they seem to fall apart in the final act; it’s just too simple.

LEGO BATMAN: FAMILY MATTERS  is presented in the aspect ratio 1.78:.  The 1080p image is arrived at with an AVC MPEG-4 codec at an average of 20 mbps.  While this appears to have been done digitally and not like the theatrically released LEGO films, there is a lack of depth here.  There are no compression issues to be found on the disc.  All the colors are robust and despite having a night time setting the black levels are consistent; since this is animated it may be easier to control this.  What did bother me was the lack of detail for Gotham City; there really were not any standout set designs or much detail put into it. Basically it could have been any city.

The DTS HD-Master Audio 5.1 track is a fun track that is filled with a robust score and array of Foley sounds for the fight scenes that are throughout the film. It’s heavily present during Brother Eye’s attack on Gotham where the subs get some work.  Is it a “great” track? No, but for a straight-to-video release this is pretty good.

The package we got for the review came with a LEGO mini Batmobile; assembly is required.  It also comes with a Blu-Ray, DVD, and digital copy of the film.

While the film is entertaining, I wouldn’t say FAMILY MATTERS is going to make the top of anyone’s list when it comes to favorite Batman stories.  For the kids this is something they’ll have a good time with, and they will most likely have some high replay value with the film. As for the more hardcore Batman fans, if you’re a collector, you’ll no doubt pick this one up; it’s worth giving a watch, but I doubt it will be very memorable.

Brent Lorentson is a horror writer and film critic based out of Tampa, Florida. With a BA in Digital Film, he co-wrote and co-directed Scavenger Hunt. His short stories have appeared in various horror anthologies. In 2019 his short script Fertile Blood will be a part of the anthology horror film Slumber Party. He is currently working on his first novel A Dark and Secret Place set to be released in late 2019. Favorite Films: Taxi Driver, Fight Club, I Saw the Devil, The Wild Bunch, Dawn of the Dead, A Clockwork Orange, Pulp Fiction, Heathers, The Monster Squad, and High Fidelity.
NCIS: New Orleans: The Fifth Season Banana Splits Movie