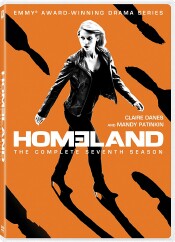 The first season without Peter Quinn. I’m not sure how I feel about that. I had planned to give the show up after Rupert Friend left, similar to how I gave up NCIS after DiNozzo’s exit. The Peter Quinn character has been an essentially part of the cast since the second season and filled the huge hole left behind by Damian Lewis’ exit. Not to mention the dynamic between Carrie and Peter was a driving force for the show, as well as realistic example of the division of love and duty. I just expected to find this season lacking, and though his presence is noted, Homeland continues to be one of the top shows of the spy genre. Homeland Season 7 delivers another thrilling experience .

This season picks up where the last season left off. Carrie has resigned her post at the White House. Now on the outside and without the vast resources she once possessed, she faces issues as she actively works to secure the release of the 200 intelligence community members under the orders of President Keane, while simultaneously trying to prove misconduct on the part of the President and her staff. Meanwhile Kean is calling for General McClendon (Robert Knepper)’s execution for his role in last season’s events and is disappointed when he receives life in prison instead.

When McClendon is killed under suspicious circumstances, Carrie goes into overdrive trying to identify the parties responsible. She is convinced that the trail will lead her to the White House. Little does she know, the answers she seeks are far more complicated than she thought. In addition, Saul is released from federal custody and given the position of National Security Advisor, once again putting him at odds with his former protégé, who seeks to bring down the administration that he is now a part of.

One of my favorite things about Homeland is that it is a multilayered show. At any given time, there are multiple things occurring simultaneously, especially for Carrie, who spent the entire season struggling to find the balance of being a mother and her duty, all while dealing with her mental illness. At the beginning of the season, she has balance; she has her daughter, Franny, and is working towards a common goal, but all that is quickly thrown into disarray when she becomes engrained in another plot against the country. She quickly begins to neglect her daughter and eventually finds herself at odds with her own sister, who petitions to take Franny away from her.

Now this storyline feels like a recycle of last year’s situation when she lost custody due to Quinn’s breakdown. I’m not a big fan of this subplot, as it pulls focus away from the main plot, which is what I’m most interested in; however, I recognize this plot’s importance, because it addresses a common theme among people in the intelligence field. The hours are long and sporadic; you can be called away at a second’s notice, and the people who usually suffer because of it are the kids of the intelligence personnel.

In my opinion, the neglect was enough for Carrie’s sister to want to take custody, but they took it a step further by having Carrie’s singular focus result in actual harm to Franny. This caused me to become alienated against Carrie, because it made her appear careless and wanting Franny to be taken away. Maybe that is just the parent in me, but speaking as a person in a similar field, it was hard me to identify with this situation. I think they should have just left it at the neglect. That was enough.

Another tribute is the school’s diverse political landscape when it comes to the season’s antagonist, this year Russia. These storylines are well grounded in reality and are as close to truth as a person without a security clearance can get. This season is likely inspired by the Russian meddling seen during the 2016 U.S. elections, as we see Keane’s administration facing scrutiny via social media as well as infiltration by way of a high-level cabinet member’s mistress. Going back to the multilayered compliment, the seamless unveiling of certain characters overall motivations in the episode, “Active Measures” kept me guessing. I thought I understood what was happening and then by episode end, it was clear that the person I thought to be the mastermind was merely another pawn in a larger scheme. That is quality storytelling.

There is another twist that though it didn’t come as too much of a surprise, was reminiscent of the early years of the series. Carrie is again engaged in a cat-and-mouse game, further complicated by her relationship with the opposing force. This also shows a trend of Carrie’s attraction to damaged men or men of dubious allegiances. This serves as another driving force for the film as well as an indication of how deep the conspiracy goes. Homeland is excellent at delivering an intricate and intriguing storyline that sets the stage for the next episode. The best example of it this season is “Species Jump”, when Saul helps Carrie come to a major realization.

The finale is bittersweet, as victory only comes at the sacrifice of a major character. It sets the stage for the next season, which has already been announced, given that a major obstacle that I expect to have far-reaching consequences will have to be overcome. Season 7 shows that despite losing a vital character, Homeland is still at the forefront of the spy genre, and I’m looking forward to what situations will be depicted in Season 8.

Jeremy Butler is a film school graduate of the International Academy of Design and Technology. He is been writing for Upcomingdiscs since 2012; however, movies have played a big part of his life for much longer. Favorite genres include horror, science fiction/fantasy, and comedy. Favorite movies are V for Vendetta, Boondocks Saints, Kiss Kiss Bang Bang, and The Godfather.
The Flash: The Complete Fifth Season (Blu-Ray) Dont Let Go