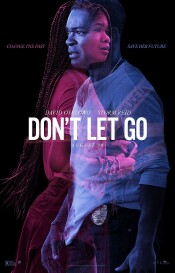 Making the film Don’t Let Go a bit of a fantasy works for the target audience.  It reminds me of a few other films that get involved with solving a crime or saving a life by using a time warp.  In this film, however, the excitement mounts, and there’s enough of a twist to make it all come to a thrilling finale. The film opens with the introduction of Ashley Radcliff (Storm Reid), a young teen who has not been picked up by her dad from school. Not connecting on the phone with Garret (Brian Tyree Henry), she calls her Uncle Jack (David Oyelowo), a police detective, to pick her up.  It turns out to be an opportunity for the two to spend some quality time together.  Days later Jack gets a call from his niece, Ashley, that’s very disturbing. Going to her home, he finds dead bodies in the house, one of them his niece.

After the funeral, Jack and his partner, Bobby (Mykelti Williamson) investigate the crime with very few results.  Then a strange thing happens, Jack gets a call on his cell phone from Ashley. With four days to save her life, he tries to find a way to get evidence on her killers that could possibly save the girl.  So begins a mystery that leads to a twisted tale of crime, drugs, and a possible rewind of time.

First major film director and writer Jacob Estes does a respectable job with his thriller, but it’s all in the way he tells his story that makes it good.  Choosing an excellent cast, he draws the needed performances from them. He then puts together an excellent team of moviemakers who bring viewers to the scene of the crime and then put the characters in a turmoil that sends the audience into an edge-of-seat mode.

Storm Reid delivers a very likable and strong character who knows how to project the many behavioral changes that are required to get the audience involved in the movie. As Ashley she goes from a mild typical young teen with some family angst, to fighting for her life, and her performance is a doozy.  She’s a huge winner here, and it should elevate her in the pecking order when it comes to future opportunities.

Oyelowo goes to work on Jack and offers up a kind and caring uncle who knows the evils that Ashley has been living with.  When she calls him from the grave, he’s unbelieving at first, then starts to make sense of Ashley’s clues. When he gets closer to the answers to who may have killed his relatives, he realizes there may be an outside chance to “step back in time”. The two actors really work well together and save the film in the finale from taking a nosedive.

Don’t Let Go has been rated R by the MPAA for violence, bloody images, and language.  There are also some scenes of brutality.

A good flick for those who like fantasy mixed with crime. Be cautious when deciding to allow immature children see the film, as it does have some scenes that are inappropriate for youngsters.

John Delia has been on all sides of the movie business from publicity, writing for publications and on line blogs, script writing, to film making. Writer, critic, film editor he has worked as a film critic on this second go around for 14 years. He earned his Bachelor’s degree at the college of Journalism and Communications at the University of Florida in Gainesville, Florida. John is an active member of the Southeastern Film Critics Association (SEFCA) . Favorite Films: Lord of the Rings/Hobbit trilogies, The Godfather trilogy, the Indiana Jones trilogy (I didn't like the 4th), The Avengers and for TV it's Game of Thrones. As for animation it's a tie between anything Pixar and everything Hayao Miyazaki.
Homeland: The Complete Seventh Season Mayans M.C. Season 1