Posted in: No Huddle by Gino Sassani on September 6th, 2019 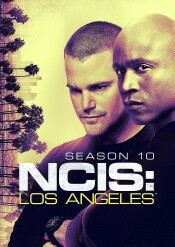 “Sam Hannah without a bomb is like Aquaman without… I got nothing.”

This is absolutely an explosive year for NCIS: LA which just finished its 10th year, and now those episodes are together in one place thanks to CBS Home Entertainment. The series has become one of the most successful spin-off shows in the history of television. Only CSI and the Law & Order franchises have brought more episodes to our television screens, and next season the NCIS franchise will have passed CSI. The truth is, if you go all the way back to the original JAG series, this is hands down the most prolific one-hour series in television history. What is even more amazing is that the NCIS shows continue to be the most-watched franchise in the entire world, a position they have held for over a decade. No one has come close to this kind of television domination. If this collection of episodes is any indication, the ride isn’t anywhere near reaching the end. All three shows have been renewed, with NCIS getting a new two-year commitment at CBS. If you haven’t already caught up on all of those earlier episodes, you don’t necessarily need to do that, but why wouldn’t you? You can at least catch up with the first nine seasons of NCIS: L.A. Here.

Season 10 picks up exactly where we left the show in the previous season’s cliffhanger. The team has gone to Mexico where they are attempting to assist Assistant Director Mosley (Long) to rescue her son who was kidnapped by his criminal gun-running father. The last season ended with their SUV taking a direct hit from a rocket and leaving the people at home to assume they’re dead. This is about as close as this team’s gotten to getting killed, and the episode teases that possibility, to be sure. But it’s not much of a spoiler by this time to reveal that our team arrives home alive if somewhat battered. Welcome to Season 10.

In the last few years the show has had to find ways to lower Linda Hunt’s workload. I suspect she never thought the show would last so long. So there’s been an almost annual “where is Hetty” story that goes on. Hetty makes an appearance at some point in the season, and she goes back to running the team, but this season is a little different. Hunt was involved in a car accident that left her injured and unable to put in much of an appearance at all this season. She ends up providing quite a dramatic entrance, but she doesn’t really return to active duty throughout the season. That meant someone has to be in charge. The show gave us a parade of various people giving the orders, and I get the sense these were tryouts for Hunt’s eventual permanent replacement. The first of these was Gerald McRaney as retired Navy Admiral Hollace Kilbride. He comes across as a drill sergeant at first, but we learn he’s an ally of Hetty’s and was sent to disband the team. Yeah, that’s another well this franchise goes to too often. He’s replaced by NYPD Blue’s Esai Morales, who plays Deputy Director Louis Ochoa. He’s more a mystery, and his actions lead to mistrust within the team. Finally the team is placed under the supervision of the very man who came to nail them for their trip to Mexico. That would be Special Prosecutor John Rogers, played by Peter Jacobson. There’s little question that the show fell into a good beat with this choice, and I wouldn’t be at all surprised to see him settle into the role in the upcoming season.

There are a few blasts from the past this season. The story of G’s father is finally brought to an end, and it’s a bit sad to see Hill Street‘s Daniel J. Travanti leave the show. It’s always a joy when we get Vyto Ruginis as Arkady. He’s a wonderfully nuanced character who often brings the comic relief. But it’s his sense of timing and willingness to just lose himself in the part that really makes him so endearing. This year we get to see a little of his bad side when his daughter Anna (Parly) ends up in prison because G wouldn’t lie for her. The story ends up a wonderful romp through a world of hitmen and international intrigue and became my favorite episode of the season.

There is also a sense of impending conclusion to this season. The truth is, it hasn’t been renewed so quickly in the past and spends almost every year on the bubble in spite of the ratings. I suspect it’s a rather expensive show compared to the others because of the higher concentration of action and explosions. Sam ends up defusing a ton of bombs this season, plus there’s the ones he didn’t get to in time. You see characters start to wrap up their stories. Sam (Cool J) is considering leaving NCIS to work for a guy who does this kind of thing privately. G (O’Donnell) is starting to think about settling down and trying to live a normal life. Kensi (Ruah) and Deeks (Olsen) buy a bar and get married this season (giving Hetty that dramatic entrance I mentioned earlier). There are many conversations about them going away from this life together. Eric (Foa) and Nell (Smith) are also getting closer and looking into joining the private world where they could avoid all of the danger and make crazy mad money. There is absolutely a lot of reflection going on here. It’s a show that’s absolutely looking toward the exit.

You get 24 episodes on six discs with a few of the usual extras. There’s the half hour traditional CBS wrap-up, a feature on the revolving door of leaders, and one on heroics. The season ends with a cliffhanger, and it will definitely return soon. How much longer after that is very much up in the air. I get a sense the actors might be getting tired of the grind. Life intrudes. “This is where things get real.”

Gino Sassani is a member of the Southeastern Film Critic's Association (SEFCA). He is a film and television critic based in Tampa, Florida. He's also the Senior Editor here at Upcomingdiscs. Gino started reviewing films in the early 1990's as a segment of his local television show Focus. He's an award-winning recording artist for Omega Records. Gino is currently working on his 8th album Merchants & Mercenaries. Gino took over Upcomingdiscs Dec 1, 2008. He works out of a home theater he calls The Reel World. Favorite films: The Godfather, The Godfather Part II, The Body Snatcher (Val Lewton film with Karloff and Lugosi, not the pod people film), Unforgiven, Gladiator, The Lion King, Jaws, Son Of Frankenstein, The Good, The Bad And The Ugly, and Monsters, Inc.
Into The Ashes IT Chapter Two