Posted in: No Huddle by Brent Lorentson on September 5th, 2019 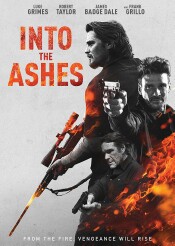 Here we go again, another revenge film. Despite my love for the “revenge” sub-genre, it is getting to the point where there just seem to be too many uninspired films flooding the market.  Blue Ruin is perhaps the best revenge film I’ve seen in the past ten years, and it seems several other filmmakers feel the same way because of the amount of films that have been churned out, all attempting to emulate its gritty realistic style, but just fail in the process.  Into the Ashes could have been something different; we get some glimpses at what could have steered this film into some interesting territory, but before it gets to take any chances, the film is quickly reeled back to the overbeaten path so many have tread upon before. In a small Alabama town, Nick (Luke Grimes) is trying his best to live a quiet, peaceful life.  He’s married to the sheriff’s daughter and has a decent job that pays the bills; the trouble is he has a violent past, and it’s catching up with him in the form of Sloan (Frank Grillo), who has just been released from prison.  Before Nick was living the quiet life, he used to run with a violent crew, and Nick took off with their money after things went bad.  Nick’s used the money to start a new life, but as you would expect, his former criminal partners don’t care that Nick has started a new life, and they are out for some payback.  Things go from bad to worse when the old gang goes to pay Nick a visit but instead find his wife home alone, and they kill her. Like I said, it’s familiar territory, though in many ways this film plays it safer than other films. Usually there are beatings, rapes, and then burning homes down, but these guys seem content with just shooting the wife (something we don’t even get to see).  One of the films biggest mistakes is they don’t do much for us to hate the bad guys. I mean, in many ways they have every right to come after Nick, and if we believe what Sloan says occurred with the wife, well, it was sort of a fair shooting. So when Sloan and his crew leave Nick for dead with only two bullets in him, one could almost argue they let him off lightly (in relation to other revenge films).

The film then fumbles again by allowing Nick to live and puts him in the driver’s seat for revenge, while the sheriff (Robert Taylor) really does nothing but follow Nick’s trail.  Sure, the sheriff always had a bad feeling about Nick and resents his daughter being killed because of Nick, but we never get to see the rage that should have been injected into this character.  Because he believes in this code of justice, he seems to do very little to find justice for his daughter.  If he was overly distraught, I could understand why he does so little, but instead this is all treated as though losing his daughter was just another day on the beat.

Another problem is that for a film that follows in the footsteps of so many revenge films, it forgets to allow the anti-hero to grieve.  There is no moment where we see Luke accept what he needs to do despite knowing it will most likely result in him dying at the end.  This is kind of the core of what drives a character their hurt and rage, for which they are willing to die just as long as they can get their vengeance first.  Part of this problem is though Luke Grimes is a good actor, this role just isn’t suited for him.  Instead of looking angry or menacing, he just seems a bit sheepish, whereas Frank Grillo simply is chewing up the scenery in the few scenes we get him in.

Now what I did enjoy was how we see Nick go on his journey of revenge with his best friend, Sal (James Badge Dale).  I won’t get into how this third act plays out, but it’s definitely the best part of the film, even if it doesn’t quite deliver.  The relationship between Nick and Sal is definitely one of the film’s strengths, and I wish we got more of this.  But I’m willing to bet that despite how strong this film manages to get in its final act it will certainly upset many when it comes to the final confrontation between Nick and Sloan and how this film attempts to wrap up its plot.

While writer and director Aaron Harvey doesn’t quite deliver the rural Death Wish I had hoped for, there is enough on the screen to show me the guy has potential if given a stronger script to work with.  This is a tough one; I wouldn’t say the film is bad; instead it just doesn’t deliver on its potential.  It drags in some parts, but I wouldn’t say this is boring. Unfortunately, though, I don’t see this as being a very memorable film, but hopefully in Harvey’s next film, he’ll be able to rise from the ashes and give us all something to be excited about.

Brent Lorentson is a horror writer and film critic based out of Tampa, Florida. With a BA in Digital Film, he co-wrote and co-directed Scavenger Hunt. His short stories have appeared in various horror anthologies. In 2019 his short script Fertile Blood will be a part of the anthology horror film Slumber Party. He is currently working on his first novel A Dark and Secret Place set to be released in late 2019. Favorite Films: Taxi Driver, Fight Club, I Saw the Devil, The Wild Bunch, Dawn of the Dead, A Clockwork Orange, Pulp Fiction, Heathers, The Monster Squad, and High Fidelity.
Killers Anonymous (Blu-ray) NCIS: Los Angeles: The Tenth Season