Posted in: No Huddle by Brent Lorentson on September 13th, 2019 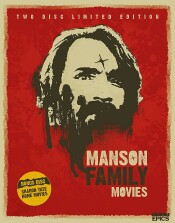 Last month it was officially 50 years since the Manson Family brought chaos into the world with the massacre at Ciello Drive that left a pregnant Sharon Tate brutally murdered along with her friends.  Since then the name Charles Manson has become a symbol of pop culture despite not ever being a part of the actual murders.  Even after all these years, there are so many myths about Manson and his followers, it’s doubtful we’ll ever really know the truth.  Over the period of 50 years there have been countless films about the murders and the Manson family. Most recently Quentin Tarantino put out Once Upon a Time in Hollywood that gave audiences a fantasy perspective of the events of that night and came out to be a successful film over the summer and a contender for numerous awards.  With that being said, there are also films like Manson Family Movies that came out in 1984 and was nowhere near the commercial success.  Manson Family Movies is impressive where it dabbles in the found-footage genre as a recreation of the events that led up to the murders while also recreating the violent crimes.  Unfortunately, despite how ambitious it may be, this looks like it was made with no budget and at times is painful to watch.

One of the first things you’ll notice while watching Manson Home Movies is that it was filmed on 8mm and shot as though these were random videos done by the Manson Family.  There really doesn’t seem to be much of a plot, as we get footage of them around Los Angeles and then shooting at Spahn Ranch.  When a plot is sort of introduced, it’s a bit hard to follow, though we are introduced to the characters as the actors hold up signs for whom they are playing.  Considering there is no dialog, and actors become interchangeable in various roles, it shouldn’t be a surprise that this wasn’t a SAG-sanctioned film.  While this is somewhat a silent film, there is music that plays over the course of the film, and a good portion of it is performed by Charles Manson…yes, you read that correctly.  Getting back to the “narrative” of this film, it wants to introduce bookies and drug deals gone bad to explain why the murders occurred.  Granted we know this wasn’t the case, but hopefully no one is watching this in hopes of watching a true account of the events.

Really, the way this is filmed, it looks as though a couple of teenagers got a hold of a camera and decided to make a movie in their garage, no script or actors.  From the bad costumes, wigs and seeing guys in drag and even the “cinematographer” playing the part of Sharon Tate’s maid, I mean, this film is a mess.  An example of how low-budget this is, for a drug deal instead of using fake money instead they simply write $5000 on a piece of paper.  But hands down my “favorite” moment comes when to imply a phone is ringing they shake the table off screen so that the phone is shaking on its cradle.  Seriously, by comparison, this film makes  Ed Wood films look like Hollywood blockbusters, but somehow it manages to be charming because of the effort that seems to be made.

Thankfully this film has a commentary track from its director, John Aes-Nihill. Sure, this track helps fill in the story gaps, but I have to warn you, his voice is so monotone throughout that it may lull you to sleep.  But the best takeaway I got from this track gets to an incident at the Spahn Ranch where the Manson family called home.  There is a sequence where the Manson girls seduce George Spahn to convince him to let them all stay. Well, apparently the actor is really tripping on MDA in this sequence, and it’s his first time, so that is a bit entertaining.

It’s impressive that the film takes us to many of the real locations, from the gates of the Tate house, to the La Bianca home; this does have a morbid sense to it that can make the viewer feel a bit dirty while watching this.

What’s more fascinating about this release, personally I find the bonus material included with the DVD the most attractive element.  On Disc 1, which has Manson Family Movies, there is also a 30-minute interview with Charles Manson. Unfortunately the audio is pretty bad, and it’s a struggle to hear what questions Manson is being asked, but the answers from Manson are relatively clearer.  Also attached, though this may be a bit too much for some viewers, there is a two-minute montage narrated by the director of crime scene photos taken from the house at Ciello Drive and in the morgue; these are pretty graphic.

Then there is Disc 2, Sharon Tate Home Movies. Watching this is a bit unsettling, especially in the context of this release.  Some of this footage is very candid and filmed around the house while other footage goes behind the scenes of The Wrecking Crew.  In some of this footage we get glimpses of Dean Martin and Sharon Tate interacting on set, while other footage involves Tate with her husband Roman Polanski and footage that includes Jay Sebring.  While the footage is completely silent and all together runs just under an hour, it’s hard to look away, and it helps humanize the tragedy.

The film has a cult status, but like I mentioned, it’s the bonus content that really makes this a title worth seeking out for those who are curious about the Manson Family or Sharon Tate.

Brent Lorentson is a horror writer and film critic based out of Tampa, Florida. With a BA in Digital Film, he co-wrote and co-directed Scavenger Hunt. His short stories have appeared in various horror anthologies. In 2019 his short script Fertile Blood will be a part of the anthology horror film Slumber Party. He is currently working on his first novel A Dark and Secret Place set to be released in late 2019. Favorite Films: Taxi Driver, Fight Club, I Saw the Devil, The Wild Bunch, Dawn of the Dead, A Clockwork Orange, Pulp Fiction, Heathers, The Monster Squad, and High Fidelity.
Supernatural: Season 14 (Blu-ray) Official Secrets