Posted in: Disc Reviews by Gino Sassani on September 13th, 2019 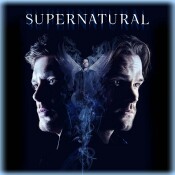 Truer words were never spoken. The big news to come out of the world of Supernatural is that it is indeed going away. The brothers made an emotional announcement during the airing of the previous season that the upcoming 15th year would be the final season of the show. It’s hard to believe that we’ll soon know a television landscape without the Winchester brothers. It’s the last show that goes back to the original WB Network that eventually lead to the current CW Network that has become more and more the home of the Warner Brothers-owned DC Comics television universe. But in the middle of speedsters, archers, aliens, and time travelers, there was always room for the Winchesters. It’ll be a bit of a culture shock to have them gone. Hard to imagine, but if you were a young 15-year-old kid when you started to watch the show, you’re now 30, likely with kids of your own. You live in an entirely different world than you did when you first came aboard. How will you feel without it?

Fortunately, you don’t have to find out just yet. There’s another season to come, and I suspect they’ll be pulling out all of the stops before it’s over, and I’ll be back here reviewing those final episodes. It’ll also never be truly over. Season 14 saw the celebration of the 300th episode, so we’ll always have over 300 hours and 15 seasons to watch whenever we want thanks to these wonderful releases on Blu-ray from Warner Home Entertainment. So let’s give the boys one hell of a sendoff. If you have no idea who these guys are, you are in for one sweet treat, I can tell you that much. But you can’t start here. You’ll never understand what’s going on, and it will taint your experience. You have a lot of watching to do to be ready for this release. Check out our long list of reviews here and start binge-watching fast. Once you’re caught up, continue on. Caught up? Excellent. On to Season 14.

It’s become somewhat of a Supernatural tradition that seasons end with one or more of the brother’s making a sacrifice in order to save the world. Season 13 was one of those years. Dean (Ackles) allows the Archangel Michael from the Apocalypse World to enter his body in order to save the multi-verse. These endings often mean that the following season begins with the brothers apart and one trying to find/rescue/save the other. That’s exactly what we have here. Sam (Padalecki) has brought refugees from Apocalypse World to the bunker where he has set up an organization of hunters. Now he has teams all over the country hunting the creatures of the night. The bunker is looking a lot like it likely did in the heyday of the Men of Letters. Sam’s the leader, but he’s also using these resources to try to find Dean. Mary (Sith) is trying to train the new recruits. Castiel (Collins) is out in the field trying to track information on Dean and also trying to mentor Jack (Calvert), who lost his grace to Lucifer (Pellegrino) during the previous season’s epic battle. Lucifer is now dead, but his vessel still lives on with the now-troubled Nick trying to figure out who he is now and what path his life will change. Unfortunately, he’s going to let the darkness continue to take him and will spend the season in a destructive path of discovery that won’t end well for anyone. Meanwhile, Michael is trying to build an army of supercharged monsters so that he can take over this Earth just as he did in Apocalypse World.

Michael as Dean provides a wonderful acting opportunity for Jensen Ackles. You can tell he’s having the time of his life, and it’s one of the most impressive acting moments I’ve seen on the show. The bad news is that Dean gets control of his body way too soon, and while there’s some back and forth, Michael spends more time in a woman’s body, and we get only Dean out of Ackles.

One of the failed efforts of a spin-off from Supernatural featured Kim Rhodes’s Sheriff Jody Mills. We were going to follow her and the girls in their hunting adventures, but the deal never happened, and we were left hanging a little bit during the back-door pilot that ran on the show. We get an episode to catch up with Jody and get a little closure on that story. I’m sure it was put out there for that reason, and it was a thoughtful inclusion.

There are a couple of big-bad kind of stories, and the heaven struggle for power is still going on, and that arc ends up coming together with the main story of the season. Still, I happen to like this show best when we get those individual hunts that don’t necessarily play to the big themes. It’s taking the show back to its roots, and I am happy that even as we near the end, we get plenty of those moments this season. Dean gets to hunt his favorite slasher film monster. Can you say: “Time to slice and dice”? We get an action figure haunted by a comic book store owner. When Dean tries to teach Jack to hunt without his powers, they get to tackle a zombie, which is like a dream come true for Jack. There’s a half- man, half-fly creature that has become one of my favorite show monsters. These episodes continue to be the bread-and-butter moments for me no matter what apocalypse the boys are trying to stop.

I still miss Crowley, but at least Ruth Connell gets a few episodes as Rowena. The refugees from Apocalypse World mean new versions of old familiar faces including getting several episodes to enjoy Jim Beaver as that world’s Bobby Singer. He continues to be a favorite, and it feels so good to have him back in the mix. There appears to even be a little something/something going on between him and Mary.

This season we saw Supernatural reach its 300th episode, and it’s a wonderful episode. After so many years and a rather powerful turn on The Walking Dead, Jeffrey Dean Morgan returns as John Winchester. Dean finds a pearl that will grant a person their deepest desire, and they use it expecting that getting rid of Michael would be that desire. What Dean really wants more than anything else is a wish he shares with fans of the show. He wants his family reunited, and that brings John from the past. But playing with time causes the expected consequences, so it’s a short visit, but we do get to see Dean, Sam, Mary, and John spend a beautiful day together.

As the season comes to a close, Jack finally gets his powers and ends up feeling betrayed by the brothers who are worried about what he might do. Jack has the potential to be the biggest, baddest bad yet. But when we finally meet the character who has been driving all of it from the beginning, it will be a bit of a surprise, and the training wheels are going to come off next season. This mystery bad guy ends up undoing all of the Winchester’s hunts and bringing all of those creatures back from the dead. Next season they have 15 years of genie to get back in the bottle, and I’ll be danged if I can see how they’re going to do it all in 20 hours. We’re about to find out.

Each episode of Supernatural is presented in a 1.78:1 aspect ratio. The 1080p image is brought to you through a AVC/MPEG-4 codec. As you might expect, this show is dark in more than just its nature. Much of the action occurs at night, so black levels need to be spot-on, or any detail can be quickly washed away like blood pools in a hurricane. Supernatural delivers with great shadow definition and deep levels of black. I’ve seen the broadcast HD versions, and these are even better. What is remarkable about the colors is that they manage to hold on to such fine definition even under intense low-light filming conditions. I’m happy about the retention of the old menu system (more on that below) but disappointed that they also returned to making this a three-disc release, thus cramming an extra episode on each disc. This series is a visually stunning series that deserves to be enjoyed without compression issues. I suspect the willingness to step the image quality back a bit is a symptom of the trend of streaming shows where compression issues are part of the delivery. But there’s a reason many of us still prefer to own the discs, and bit rates are a big part of that preference.

This is the only remaining Warner Home Entertainment title to retain the traditional menu setup and navigation. I have to say I am glad to see it survive somewhere. I’ve always liked this setup. It allows you to see what’s on all of the discs, and it gives you things like running times and descriptions so you can plan your viewing with far more information. All of the other releases have gone to a more traditional and less useful menu system. Enjoy this also while you can.

The Winchester Mythology – The Choices We Make: (24:51) It’s not just the Winchesters here. The feature looks at the path these characters have chosen over the years and where it all might be leading.

No one really expects Season 15 to be the end of the story. The series will end. But this show has deep roots and so many more stories left to tell. I expect that films will be in the cards down the road, and I fully expect a run of films to begin within the next 5-6 years. Will absence make our hearts grow fonder? “That is the question, isn’t it?”

Gino Sassani is a member of the Southeastern Film Critic's Association (SEFCA). He is a film and television critic based in Tampa, Florida. He's also the Senior Editor here at Upcomingdiscs. Gino started reviewing films in the early 1990's as a segment of his local television show Focus. He's an award-winning recording artist for Omega Records. Gino is currently working on his 8th album Merchants & Mercenaries. Gino took over Upcomingdiscs Dec 1, 2008. He works out of a home theater he calls The Reel World. Favorite films: The Godfather, The Godfather Part II, The Body Snatcher (Val Lewton film with Karloff and Lugosi, not the pod people film), Unforgiven, Gladiator, The Lion King, Jaws, Son Of Frankenstein, The Good, The Bad And The Ugly, and Monsters, Inc.
Aladdin (2019) (UHD Blu-ray) (4K) Manson Family Movies