Posted in: No Huddle by Gino Sassani on September 17th, 2019 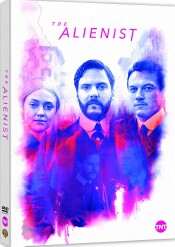 “In the 19th century, persons suffering from mental illness were thought to be alienated from their own true natures. Experts who studied them were therefore known as alienists.”

The Alienist is a new drama airing on TNT and is the latest in the recent trend of period-piece dramas to populate the television series market. Like many of these kinds of shows, The Alienist relies as much on atmosphere as it does on the actual story being told. The series is intended to attack the senses and obviously elicit some kind of a reaction. Filmed in Budapest, the show takes us back to New York City in the 1890’s and truly builds a rather deep and dark environment that you will likely remember far longer than any other element of the show. The series also utilizes a tremendous amount of computer-generated images for set extensions and sometimes complete environments. It’s an ambitious undertaking and might well have been the crowning achievement of the series. However, Warner has decided to send the DVD of the series and not their usual Blu-ray for my review. Unfortunately, the bandwidth of a DVD can not do justice to these grand illusions. The entire show suffers from compression issues and an off-putting soft focus that totally distracts from all of this creativity. I wish I could have enjoyed the show in its apparent grandeur, but alas, I can really only speak to the drama itself.

The show doesn’t waste any time getting us into the story. From the pilot’s opening moments, we see that a young boy has been brutally murdered on a bridge. The scene draws the interest of Dr. Kreizler, played by Daniel Bruhl. His interest isn’t exactly welcome by a police department that has not yet embraced the science of profiling or psychology in criminal investigations. So Kreizler sends John Moore, played by Luke Evans, to the scene of the crime. Moore is an accomplished illustrator, and he’s sent to draw every detail of what he sees so that Kreizler might be able to glean something from the killer’s mental condition. It isn’t exactly helpful, so the psychologist imposes on Moore’s relationship with Police Commissioner Theodore Roosevelt, played by Brian Geraghty. Yes, it’s that Theodore, better known as Teddy Roosevelt. At this time of his career, Roosevelt has taken the job of Police Commissioner and is rooting out corruption throughout the department. He’s made enemies, including the popular captain Thomas Byrnes (Levine), who still operates a sort of “deep state” group of officers and commanders who remain in the department. It is within this complicated environment that Roosevelt eventually gives his blessing for a task force team that will operate outside of the police department and pursue their own investigation.

The team is lead by Kreizler, with Moore serving not so much of an illustration duty, but more his conscience and sounding board. Their relationship is quite akin to that of Doyle’s famous detective Sherlock Holmes and his trusty aid Dr. John Watson. I suspect that the relationship’s familiarity was not an accident. We get scenes of a cluttered sitting room where Kreizler goes over his theories for Moore to comment upon. Roosevelt has also assigned two of his own detectives to work on the team. They are brothers who suffer prejudice within the department owing to their pioneering of modern police techniques which have not yet found themselves in favor with police departments or the courts. We’re talking things like fingerprints and examination of trace evidence. They are also not popular because they are Jewish and face persecution for that heritage in that time and place. Douglas Smith plays Marcus Isaacson, and Matthew Shear plays Lucius Isaacson. The final member of the team is Sara Howard, played by Dakota Fanning. Sara is the first woman hired to the NYPD, and she has been relegated to secretary work for Roosevelt and sees this team as a chance to prove she is a good detective. While her title is the liaison between the team and Roosevelt, she becomes an essential part of the investigatory force.

They are all chasing a serial killer who preys on a unique element of New York’s seedy underbelly. There are brothels that cater to an unusual sexual appetite in the city. They are young male prostitutes who dress in women’s clothing and act rather feminine. Apparently it’s a huge trade, and there are prominent families at risk from the investigation, and men like Thomas Byrnes are doing what they can to protect those aristocratic families. The show lingers far too much on this seedy underbelly. It doesn’t take us long to understand what’s at play here, but the series lingers on the perversions to the point of certainly being gratuitous. I think I got it pretty quickly. It’s a clever element of atmosphere that is quite like a darker version of Dickens’ depictions of child exploitation. It’s clever until it’s used far too much; then it merely becomes lazy. There’s a fine line between brilliant filmmaking and pandering, and this show crosses the line far too swiftly.

It was difficult to look beyond the pandering grime and grit of these young male prostitutes and the DVD limitations surrounding the f/x. The show is also quite stylish in its images. The crime scenes appear to be gory at first, but the closer look we get it becomes overly styled, and these images look too much like impressionist paintings. It clashes with the grit of the depicted city and removes the viewer from the stark brutality that is going on here. I was able to deal with those limitations, because we do get wonderful characters here who are beautifully nuanced and compelling throughout. The series is as much about Kreizler coming to grips with his own mental issues and internal struggles, and it makes him quite the complicated character. There are some undertones of jealousy surrounding Sara. Both Kreizler and Moore have feelings for her, and those issues get in the way of them doing their jobs. During one stakeout they end up losing their quarry because Kreizler and Sara are having an idiotic conversation about their feelings when they were supposed to be waiting to take action. It’s an almost laughable moment, and it frustrated me that all of this introspection was taking away from the focus of the series. And that’s the huge issue here. The show has some incredibly good moments that are often reduced because someone couldn’t help but take a good thing too far.

The entire series of 10 episodes completes this one case. The second season will reveal a new investigation and should have Sara firmly set as a detective in her own right. You get all 10 episodes on four discs with a few very brief extras. Each episode has a 2-3 minute “Inside the Episode” segment, and there are about a half a dozen of these 2-3 minute features on aspects of the series. They repeat many of the same interview clips and are mostly promotional in nature. The next season will air soon, and I’ll follow it, hoping the next time we get better resolution copies to review. “I will follow wherever it goes, even if it leads me to the darkest pit of Hell.”

Gino Sassani is a member of the Southeastern Film Critic's Association (SEFCA). He is a film and television critic based in Tampa, Florida. He's also the Senior Editor here at Upcomingdiscs. Gino started reviewing films in the early 1990's as a segment of his local television show Focus. He's an award-winning recording artist for Omega Records. Gino is currently working on his 8th album Merchants & Mercenaries. Gino took over Upcomingdiscs Dec 1, 2008. He works out of a home theater he calls The Reel World. Favorite films: The Godfather, The Godfather Part II, The Body Snatcher (Val Lewton film with Karloff and Lugosi, not the pod people film), Unforgiven, Gladiator, The Lion King, Jaws, Son Of Frankenstein, The Good, The Bad And The Ugly, and Monsters, Inc.
Hustlers Exclusive Interview With Gavin Hood: Co-Writer & Director Of Official Secrets