Posted in: Podcasts by Gino Sassani on September 19th, 2019 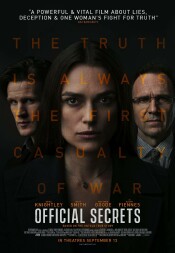 Official Secrets is now out in theaters. It tells the story of a British Intelligence analyst Katherine Gun who leaked a memo that showed the U.S. and Britain attempting to get a UN resolution to sanction war in Iraq by leaning on UN members. It’s a true story and stars Keira Knightly and Ralph Fiennes. The film was co-written and directed by Gavin Hood. I had a wonderful opportunity to talk with Gavin about the film. There were obviously some special circumstances with a film like this that depicts living people. How did he handle all of that? I found out and now so can you and you won’t need an NSA wiretap to do it. Bang it here to listen in on my chat with Gavin Hood.

Gino Sassani is a member of the Southeastern Film Critic's Association (SEFCA). He is a film and television critic based in Tampa, Florida. He's also the Senior Editor here at Upcomingdiscs. Gino started reviewing films in the early 1990's as a segment of his local television show Focus. He's an award-winning recording artist for Omega Records. Gino is currently working on his 8th album Merchants & Mercenaries. Gino took over Upcomingdiscs Dec 1, 2008. He works out of a home theater he calls The Reel World. Favorite films: The Godfather, The Godfather Part II, The Body Snatcher (Val Lewton film with Karloff and Lugosi, not the pod people film), Unforgiven, Gladiator, The Lion King, Jaws, Son Of Frankenstein, The Good, The Bad And The Ugly, and Monsters, Inc.
The Alienist Season 1 Hawaii Five-O (2010) The Ninth Season