Posted in: No Huddle by Gino Sassani on September 20th, 2019 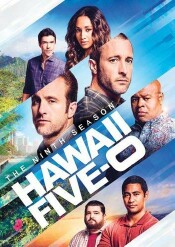 “Look. There ain’t gonna be any cryin’.”

Just a couple of years ago the reincarnation of Hawaii Five-O looked to be in a bit of a controversy with some of the cast members who have been with the show from its start. Daniel Dae Kim played Chin Ho Kelly, a character from the original series. Grace Park played Kono Kalakua. They were important characters on the show, but the actors didn’t think they were getting paid enough. They believed they should have gotten the same pay as the two actors at the top of the call sheet. CBS declined their requests, and suddenly it became about race, because both actors are Asian. The only trouble with that theory is there are many Asian actors on the series, and this was the wrong show to play the race card against. Both are gone now. New cast members have moved in, and now the show appears to be at its best. The current cast is a strong blend of actors and characters. By the time I was halfway through this ninth season, I was asking myself Chin and Kono who?

For those who have been living under a rock since the 1960’s, I’ll give you a quick rundown on what this series is about. The governor of Hawaii created a special task force that operates around the regular police department. They handle the tough cases and are given “means and immunity” from bending the law a bit in order to take on the tougher cases. The team is headed up by a former Navy Seal whose father also served in law enforcement. He’s Steve McGarrett, originally played by Jack Lord, and here played by Alex O’Loughlin. His partner is an ex-New Jersey detective named Danny Williams, another original character played once by James MacArthur and now played by Scott Caan. If you recognize the last name, that’s because he’s the son of Sonny Corleone, James Caan. If the name doesn’t give you any hints, his speech patterns are a dead giveaway. The character is also the source of the show’s famous line: “Book ’em, Danno”. The two pretty much act like a bitter married couple, and their interactions are one of the strengths of the series. They love each other but constantly argue. The chemistry between these two is priceless and alone worth the price of any season collection. This season, however, Caan has taken a step back on the show to spend more time with his real family. He doesn’t get near as much screen time this season, and I hope it isn’t the beginning of the end of his participation on the show.

Steve and Danny don’t do all of this alone. Over the years new cast members have been added along the way. Chi McBride is Lou Grover. He used to be a police captain in Chicago before his family got threatened because Grover exposed some bad cops. McBride is a big guy and can be quite intimidating, but he’s a huge teddy bear inside. Fans of the old Boston Public will fondly remember him as the school’s principal. Chi actually writes and produces an episode. It deals with his family coming for Thanksgiving. Mom is played by the Soul Queen Gladys Knight, dad is played by the great Louis Gossett, Jr., and his brother by Clifton Powell, who will continue on as a recurring character from this point. It’s a really nice hour, and I can’t wait to see him get this involved again. Jerry Ortega is played by Lost’s Jorge Garcia. He started the show for a few years as a recurring character who got the team mixed up in his conspiracy plots. He’s the island’s version of the Lone Gunmen of X-Files fame. He’s now the team tech and expert on lore and history. Ian Anthony Dale plays ex-mob family heir Adam Noshimuri. Adam married Kono but of course with her being gone, they’ve split the characters up this season, and Adam is invited to join the team. He has contacts in the mob world on the island because his father was one of the bosses. He’s been trying to get out from under his family tradition, and now he’s on the team.

The two newest members of the team joined last season with the departure of the two regulars. Beulah Koale is Junior Reigns. He was a Navy Seal who had lost direction in his life until Steve reached out to give him purpose on the team. He’s the young, optimistic guy and somewhat of a puppy dog. For a Seal he can be quite naive. This season he has to help his father deal with the memories of his sister Maya, who was killed years ago by a drunk driver who is now looking for parole. Meaghan Rath is the sister of Supergirl’s brainiac Jesse Rath, and plays Tani Rey. She’s also a tough cookie looking for direction and had Steve reach out to her. These two new characters are partnered, and they have found some terrifically easy chemistry. They’ve become another duo that keeps the show interesting and fresh.

The team has some folks outside of the group who usually play a part in the stories. Taylor Wiley was a UFC wrestler now turned actor. He plays Kamekona, an island business wiz who runs a shrimp company and this season takes over the restaurant that Steve and Danny started last season. He’s the team’s number one informant. He used to be a thug and has a lot of connections in the underworld. Kimee Balmilero is the medical examiner, Dr. Noelani. She gets to have some action this season when a mobster kidnaps her to save the life of his father. Finally, you have Dennis Chun as police Sgt. Duke Lukela. He’s the team’s main contact within the local police department.

This season marked the 50th anniversary of the airing of the original series. To help celebrate that milestone, you’ll find two episodes of this season are remakes of original show episodes. It’s not the first time the show has done this. The season opens with a remake of the original show’s pilot that involves brainwashing and a nod to the James Bond vibe that was particularly alive in the late 1960’s. The second involves an episode that doesn’t follow the original exactly. The first show had an episode that won an Emmy. It followed the “life” of a gun as it passed through various hands over a 24-hour period. This time we follow a gun through several years of being passed around. The kicker is that it ends up having touched many of the team’s lives over those years without them ever knowing the connection until now.

This season could also be mistaken as a spin-off from Cold Cases. Several episodes solve older crimes. That includes the show’s 200th episode that takes us back to the 1940’s in a dream Steve has of his idol’s only unsolved case. The idol was actually real-life Hawaii detective Chang Apana, who was the real-life inspiration for Charlie Chan. Steve’s dream leads him to evidence that solves a 90-year old crime. A wannabe PI gets killed, and the team end up solving a 20-year-old child abduction case. The Halloween episode has Jerry making his annual trip back to the abandoned summer camp he visited as a kid. He was sure he saw a legendary axe killer cleaning a bloody axe. He is convinced there was a murder 30 years ago and comes to dig every year. But this year he and his friends are threatened by the killer, who comes back to keep them quiet. Someone buys one of those storage auction units to find a bag of human bones, which leads to the solving of another ancient case.

Joan Collins guest stars as Danny’s ex-mother-in-law and possibly future mother-in-law, because he’s been spending a lot of time with the ex. She’s a famous romance novelist who doesn’t have a lot of kind words about Danny. She wants Danny to serve as her protection detail while she’s there on a book-signing trip. He brings in Steve, who ends up getting along great with her. You can likely use your imagination to see how that turns out.

Of course, you don’t really have to use your imagination, because it’s all available on DVD from CBS Home Entertainment. You get all 25 episodes on six discs with a few extras that include deleted scenes, the traditional CBS season summary, a celebration of the 200th episode, and an hour-long sit-down with Chi McBride sipping wine and talking about his episode. It’s also a year of looking back for the show and honoring what came before it. “Nothing wrong with a little fun for old time’s sake.”

Gino Sassani is a member of the Southeastern Film Critic's Association (SEFCA). He is a film and television critic based in Tampa, Florida. He's also the Senior Editor here at Upcomingdiscs. Gino started reviewing films in the early 1990's as a segment of his local television show Focus. He's an award-winning recording artist for Omega Records. Gino is currently working on his 8th album Merchants & Mercenaries. Gino took over Upcomingdiscs Dec 1, 2008. He works out of a home theater he calls The Reel World. Favorite films: The Godfather, The Godfather Part II, The Body Snatcher (Val Lewton film with Karloff and Lugosi, not the pod people film), Unforgiven, Gladiator, The Lion King, Jaws, Son Of Frankenstein, The Good, The Bad And The Ugly, and Monsters, Inc.
Exclusive Interview With Gavin Hood: Co-Writer & Director Of Official Secrets Elementary: The Complete Series