Posted in: No Huddle by Gino Sassani on September 26th, 2019 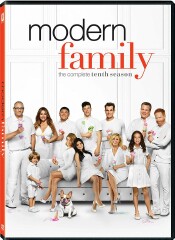 The 10th season of Modern Family has arrived on home video. The series entered its 10th season with a bit of a tease. It was revealed that during this season one of the cast members would die. Of course the expectation being built was that it would be one of the regulars, and speculation had it that Jay was going to be the one to go. I never bought any of that. Jay’s the patriarch of this family and the one piece of the enormous puzzle that might be the most essential. What I and many fans of the show didn’t expect was that it would actually be a recurring character, and that the core family was safe for one more season. After the 11th season, it all comes to an end. Modern Family will be riding off into the sunset come spring of 2020, and it will be a sad day indeed. But that’s a ways off, and we still have Season 10 on home video to watch.

Jay (O’Neill) is the patriarch of his extended family. He’s a pretty wealthy businessman who lives in relative comfort. He’s married to a Columbian woman who is much younger than he is. Gloria (Vergara) also brings her son Manny (Rodriquez) to the Pritchard home. They also have their own 5-year-old named Joe (Maguire). Jay has two grown children with families of their own. Mitchell (Ferguson) is gay and living with his partner Cameron (Stonestreet). The two have adopted a Vietnamese daughter named Lily. Mitchell is an attorney who supports his family, while Cameron is the jolly stay-at-home dad. Jay’s daughter Claire (Bowen) has a more traditional family. Husband Phil (Burrell) sees himself as a cool, hip kind of dad, which usually leads to some embarrassing situations for him and his family. They have three kids. Luke (Gould) is the only boy and more clueless than his father. He’s obviously not playing with a full deck. It’s ironic, because actor Nolan Gould is a Mensa member and somewhat of a child genius. Now that’s acting. Daughter Alex (Winter) is the smart one in the family and finds herself the most embarrassed by everyone else. Daughter Haley (Hyland) has become quite worldly. She’s been somewhat of an airhead and has slept with a lot of guys, but this year that’s all changing for her.

This is all about a great variety of characters and acting styles. It provides a wealth of places and situations that the series can move around in. There isn’t near as much of the repetition that too many comedies find themselves trapped within. The situations are almost all new and fresh each week. The chemistry is excellent. There isn’t a weak link in the cast. Julie Bowen in particular has such incredible expressions; it’s funny just to watch her react. The show never goes for the obvious joke or works too hard to set the humor up. The writers are smart enough here to just set up the situations and let the laughs come to them. The result is that the characters never feel like they’re reaching too hard for a laugh. It all comes so naturally. This is the best new situation comedy I’ve seen in years. Check it out and see what it’s like to laugh without checking yourself and your company for appropriateness. Who says you can’t be funny for all ages? The cast and crew of Modern Family don’t believe any of that crap. Just one episode and you won’t either.

Each episode can very certainly live on its own. I suspect it will be a popular syndication entrant. But each season did give us some story threads that carried over from one episode to the next. It’s not enough to distract from the episodes themselves, but just enough to allow some evolution of the characters. This season Haley shows the most maturation. She’s got two boyfriends, and she has to make a decision. That will be an important one, because she’ pregnant with twins, and that will be the huge thread taking us to the season finale and the birth of the twins. It’s one of those television family events that’s perfect for season or series finales.

Luke grows up a bit too and ends up in community college. It’s at Luke’s college that Phil sits in on a real estate class and walks out hired to teach it. Phil continues to be my second favorite character on the show, and I was pleased to see him get a bit more screen time this season.

It’s a new world for Jay and Claire. They have sold/merged their closets business and encounter a new business atmosphere with the millennials they are now working with. It’s like working at a playground, so Jay has to deliver the discipline, but before long he finds that he’s keeping Claire from taking charge and going in the direction she wants. So he retires and starts a new business building luxury dog beds in shapes like pineapples and space capsules.

Modern Family has enjoyed wonderful success over the years and continues to be my favorite sit-com currently playing on television. The show has a mantle full of Emmys and Golden Globe awards. But there’s more to it all than that. You can watch these grim comedies where the characters are either mean or crazy. Or “you can just smile more”.

Gino Sassani is a member of the Southeastern Film Critic's Association (SEFCA). He is a film and television critic based in Tampa, Florida. He's also the Senior Editor here at Upcomingdiscs. Gino started reviewing films in the early 1990's as a segment of his local television show Focus. He's an award-winning recording artist for Omega Records. Gino is currently working on his 8th album Merchants & Mercenaries. Gino took over Upcomingdiscs Dec 1, 2008. He works out of a home theater he calls The Reel World. Favorite films: The Godfather, The Godfather Part II, The Body Snatcher (Val Lewton film with Karloff and Lugosi, not the pod people film), Unforgiven, Gladiator, The Lion King, Jaws, Son Of Frankenstein, The Good, The Bad And The Ugly, and Monsters, Inc.
Downton Abbey Yesterday (UHD Blu-ray) (4K)