Posted in: No Huddle by Jeremy Butler on September 27th, 2019 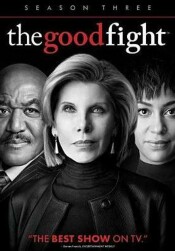 The Good Fight just keeps getting better with every new season. It has become one of my guilty pleasure shows. Though it does tend to take quite a few jabs at our president and likes to emphasize alleged depravity, beyond that is a show that is very relevant to today’s society, and this season is no different as the show hits the ground running in the first episode with a storyline that has long reaching effects on the firm, as well as a member of the main cast. This storyline is obviously a reality-based storyline used for the purposes of highlighting the MeToo movement, as well as addressing implications this movement has had on certain celebrities’ images, particularly Bill Cosby’s fall from grace. I believe the proper term for this is “ripped from the headlines.”

After appearing to have found their footing, the firm of Reddick, Bosemon, & Lockhart find themselves facing an image problem when during a documentary honoring founding member and civil rights legend, Carl Reddick sexually assaulted multiple women within the firm and several women not affiliated with the firm. Obviously, this comes as a shock to the firm, but no one is more shocked than his daughter, who is also a partner at the firm. With this storyline, Season 3 had me hooked from the very first episode, mainly for the affects that this revelation has on Audra McDonald’s character. Best I can tell, this was the first emotional story arc the character has undertaken in the series, and she handled it beautifully in my opinion. It also provided another side to how this crime of incident affects all parties involved. We are used to seeing how it affects the victims, but this season showed that the children of the perpetrator are also victims, as Liz’s perception of her father is forever changed, and she is forced to make an impossible decision about how to address her father’s actions.

It also appears that one powerful storyline wasn’t enough for this season, as The Good Fight also tackled racial double standards in the workplace when it is revealed that the white attorneys in the firm are paid more than their black coworkers. This storyline is predominantly focused on Lucca, but the situation ends up having more dire consequences for Maia.

Speaking of Maia, she really came into her own this year. With the whole ordeal with her family wrapping up in the previous year, we got to focus on Maia’s journey as a lawyer. Her scene with Michael Sheen as the Country was obnoxious, but creative attorney Roland Blum was an inspired idea that though it may lead her own a path away from Reddick, Boseman, & Lockhart, offer a satisfactory direction for the character.

Now let’s talk about the show’s biggest draw, Christine Baranski. This season we see her tied up with a group of like-minded Democrats looking to bring down Trump. Though all the Trump stuff gets a little over-the-top, this was a very interesting storyline as the group pushed the envelope with the methods they used to fight back against the administration. As expected, the deeper the group goes down the rabbit hole, the more the ends begin to justify the means. Though partially responsible for the group’s activities, Diane at least maintains a moral compass, but by season end, will that be her downfall?

Of the three plot lines, the Maia storyline is my favorite, as it is the most transformative of them all. Maia is no longer the meek little junior attorney, no longer in the shadow of Lucca. Rose Leslie does not appear in every episode, and when she is gone, her absence is noticed. For a while I began to question whether her storyline would have an acceptable conclusion. I’m unsure of her date with the show, but I for one hope that she will be back for the fourth season, if only for the purpose of keeping an income in the Harrington-Leslie household.

The CBS All Access flagship show continues to entertain and deliver some of the wittiest dialog that I have ever encountered in television programming, all while managing to stay relevant with real world issues. The show is such a hit that the previous seasons are now airing on CBS proper on Sundays. This will undoubtedly expand its fan base, but I intend to stay faithful to the streaming platform so I can see episodes as they premiere.

Jeremy Butler is a film school graduate of the International Academy of Design and Technology. He is been writing for Upcomingdiscs since 2012; however, movies have played a big part of his life for much longer. Favorite genres include horror, science fiction/fantasy, and comedy. Favorite movies are V for Vendetta, Boondocks Saints, Kiss Kiss Bang Bang, and The Godfather.
This Is Us: Season 3 SEAL Team: Season Two