This Is Us: Season 3

Posted in: No Huddle by Brent Lorentson on September 27th, 2019 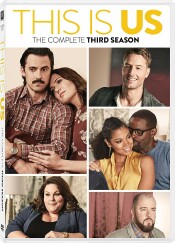 When it comes to shows that simply sneak up on you and manage to suck you in, This Is Us would be a show I never saw coming nor expected to simply fall in love with.  As a show that is on network television it stands toe to toe with the best that cable has to offer. But what is most surprising is that what sets this show apart from the rest of the pack isn’t a complex antihero or dragons; instead, it is as simple as being a show that feels as real as anything I’ve seen on television in some time.  As the title would suggest This Is Us is simply about a family and the struggles and successes that come day to day, though as many of you can understand and relate, there is nothing simple about life and the constant hurdles that are thrown at us on a day-to-day basis.  I was hesitant when I first began the series, but I was quickly moved by its characters and their stories.  I was impressed by the first two seasons, and I’ve wondered if it can maintain its level of quality moving into a third season level.  After another 18 episodes and plenty of tears, I was a little let down by the first part of the season, but it came together in the end, delivering some of the best moments in the shows run to date.

Dan Fogelman (Crazy, Stupid, Love) has created a show about the Pearsons, Jack (Milo Ventimiglia) and Rebecca (Mandy Moore) as they go about their journey raising their three kids who all happen to share the same birthday with their father. This season we start off with the siblings turning 38. There is Kate (Chrissy Metz) who is continuing to follow her interest in singing as well as enjoying the newly married life with Toby (Chris Sullivan), Kevin (Justin Hartley) who is on his way to becoming a respected actor after the success of his new film, and then we have Randall (Sterling K. Brown) who seems to finally have a handle on his life and family.  Everything seems to be going well for the Pearsons, but of course, that is all going to change.

Through Season Three we continue to have the altered timelines where the show constantly flashes back to when Kate, Kevin, and Randall were kids.  This season we have more time spent going further back to show us about the lives of Rebecca and Jack, before they had kids and before they got together. “Nine Bucks” opens up the season, where we get to see Jack and Rebecca’s disastrous first date, though it is still sweet.  What’s important here is that we get to see that things were not always easy and perfect, and it sets things up nicely as in later episodes we go along with Jack on his journey to Vietnam, and we get to know more about his little brother Nicky, who has been a mystery in previous seasons.  To piggyback this narrative, Kevin has a realization about how little he knew about his father and his time in the war, and he embarks on a journey to find answers.  The Kevin portion of the story is honestly the strongest story for the first half of this season, and it really opens up a lot with his character and sets up plenty of story arcs down the road.  I really don’t want to reveal much, but the payoff when Kevin gets his answers is really a great moment and simply shows how great these writers are and how impressive this cast is.

As for Kate, she and Toby have decided through a dangerous procedure to attempt to have another baby.  I’ll be upfront and say it; this is the storyline that will hit viewers with an emotional gut punch.  There are a lot of ups with this couple, and they are a couple you want to root for, but this emotional rollercoaster at times can get a little too real.  There is some great television when it comes to this storyline, and when it comes to a boiling point in “The Waiting Room” episode, it’s genuinely a shame that their most important story goes unseen.  Just about the entire episode takes place in a waiting room, where the family has come together and we get to see a lot of story points come to a head in this episode.  The writing and performances here are so good that it’s easy to forget that these are simply actors performing a scene.

Then there are Randall and his wife, Beth (Susan Kelechi Watson). If you thought last season was heavy on the drama with them adopting Deja, this season really ups the drama that is occurring in their household.  This season, in true Randall fashion, he decides to run for city council in Philadelphia when he sees how the neighborhood of his biological father has been neglected. Sterling K. Brown has really embraced this character and once again delivers an amazing performance; he has so many moments this season it’s hard for me to pick a favorite.  But for fans of Randall and Beth, we do finally get to see their story about how they met up to when they got married.   This season shows how much this family has gone through and the difficulty of maintaining a “happy marriage”.  This is another storyline where I can imagine many couples will relate, sympathize, and perhaps take sides, as it delves into the roles people take in marriages and how easily a person can lose themselves.

From the previous seasons I’ve felt like Kevin was the weak link of the show, but I’m glad that this season the writers have managed to give him some solid material to sink his teeth into.  Sure, the drinking and substance abuse is major plot device, but I hated how it always felt more like a movie of the week than actually building on his character.  By introducing Zoe (Melanie Liburd), the relationship that evolves between her and Kevin has been a great way to give his character some depth, and while I hadn’t been the biggest fan of Kevin in previous seasons, his journey this time has brought me around.

This brings me to Jack and Rebecca. Ventimiglia and Moore have a great chemistry together in this. and they certainly are a couple that many should aspire to be.  This season though their relationship takes a bit of a back seat.  Most of the stuff is with Jack as he was in Vietnam, while most of Rebecca’s story is about her raising the kids after Jack died.  Personally the storyline with Jack in Vietnam was a bit underwhelming and to a degree plays like a poor mans The Deer Hunter meets The Thin Red Line.  There isn’t too much action, but simply enough to show us the typical “war is bad” and how it changes people.  There just seemed to be so many wasted opportunities having Jack and his brother together that it got frustrating to watch at times.  Sure, it’s supposed to show how they grew apart, but the problem is we don’t get enough of them together to really appreciate the loss that occurs between them. Another disappointment was how the show handled the kids attending their first dance. Rather than spend time with the kids while they enjoy several important firsts, the focus instead shifts to Jack and Rebecca.  Sure, they gloss over a lot to include it, but I feel like so much was neglected while they instead focus on Jack not attending any school dance.  This isn’t as though it’s the first time they pair ever danced together, so why focus on this when Randall is being clumsy and awkward with his date; how about Kate, or Kevin sharing his first kiss with Sophie. (We see it, and it’s sweet, but this was a huge moment for Kevin, and it feels cut short.) Even when you look at the present-day context for these characters, it seems like more time should have been spent here.

For those who have already watched the show, you know that it is an emotional rollercoaster. Personally, binge-watching this season was emotionally exhausting.  There are many emotional highs and lows like the previous seasons, but that’s what makes this show work, because it is true to life.  The season ends with flash forwards that give us a taste for things to come and what these characters will have to work through.  I’m excited to see what comes next, but I’m curious to see how long everyone involved can maintain the level they are working at and delivering us.  Only time will tell, and one thing is for certain, I’ll be watching it…most likely with a tissue within reach.

Brent Lorentson is a horror writer and film critic based out of Tampa, Florida. With a BA in Digital Film, he co-wrote and co-directed Scavenger Hunt. His short stories have appeared in various horror anthologies. In 2019 his short script Fertile Blood will be a part of the anthology horror film Slumber Party. He is currently working on his first novel A Dark and Secret Place set to be released in late 2019. Favorite Films: Taxi Driver, Fight Club, I Saw the Devil, The Wild Bunch, Dawn of the Dead, A Clockwork Orange, Pulp Fiction, Heathers, The Monster Squad, and High Fidelity.
The Brady Bunch: 50th Anniversary TV & Movie Collection The Good Fight: Season Three