Posted in: The Reel World by Gino Sassani on September 28th, 2019 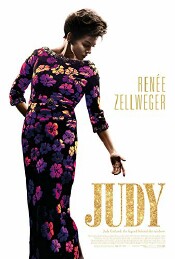 “Sometimes I wish upon a star…”

Sometimes the brightest stars shine for the shortest times. That could certainly be said for Judy Garland. 2019 marks the 80th anniversary of the release of The Wizard Of Oz. There have been plenty of celebrations, but it’s fitting that we also use this milestone as a chance to do some tribute to Judy Garland, who as a young girl brought the central character of Dorothy to life for generations of movie fans. It’s an entirely appropriate time to offer some empathy to her, and that’s exactly why Judy couldn’t have come at a better time. It’s based on the stage play End Of The Rainbow by Peter Quilter. The film offers us a rather intimate look at a time in the life of the actress just a year before she died from a drug overdose.

The film actually tells two stories from two very different eras in the life of Judy Garland. We meet her first as a young girl on the set of her iconic triumph The Wizard Of Oz. But we meet a rather troubled girl. Her own innocence is a liability. She wants to do things a normal young girl wants to do, but she’s scolded for these desires and told that she must live up to the more adult responsibilities that her role in the film entails. These moments don’t really dominate the film and only serve as a few interludes to the main story. They are obviously there to give us some context for the woman that she would become. You get the feeling that the odds of her having a happy life were stacked against her. The interludes show what today would likely be considered almost abusive treatment.

When we meet the older Judy (Zellweger), and life has not been a bed of roses, ruby or otherwise. She’s forced to take small-time appearances for very little money in order to care for herself and her two children. But things have gotten quite bad, and she finds herself coming home to find she’s been evicted. Hope comes when she is offered the chance to do perform in England for five weeks. She jumps at the chance to finally earn some real money. When she arrives, we discover that she’s not very eager to do the gig. She refuses to rehearse and sequesters herself in her hotel room. She has to practically be dragged to the stage to get her to the show. She doesn’t have the courage to see if she still “has it”. She reluctantly takes to the stage and quietly begins to sing. But something rather wonderful happens. The music comes to her, and she begins to regain a confidence she hasn’t had in years. It goes well… for a while. Unfortunately, Garland can’t quite shake her own self-destructive tendencies and ends up on stage one night quite incapacitated. She delivers a horrible performance, falling flat or her face. As if that weren’t enough, she gets hostile with the crowd, cursing and yelling. She’s played herself right out of a job, but before she goes she decides to take to the stage for one last swansong. It’s the moment we’ve all really been waiting for. From the first musical strains of Somewhere Over The Rainbow, a kind of emotional wave overcomes both character and audience. A year later she would be gone.

Renee Zellweger simply has to be part of the Oscar conversation this year. She has all of the nuances of the character down. She completely loses herself in the character, but that didn’t impress me half as much as the moments of transformation she delivered. When Garland hits her stride in song, everything changes, from the way she carries herself to a gleam behind the eyes that wasn’t there mere moments before. I love seeing those kinds of character changes, and Zellweger makes you believe every moment of it. It’s honestly important that she deliver the performance of a lifetime. There is little else in this film to carry the weight of the entire production. She gets the solid screen time, and the supporting cast literally disappears in her presence. The final performance is also an emotional floodgate. Garland’s connection to that English crowd was a grand moment. I got the feeling as if she were receiving something akin to absolution from the audience. It dampens the tragic death a year later just enough to make us believe she had her moment of redemption. It’s the kind of payoff that made everything else work for me.

Look. This isn’t a perfect film. I’d be lying if I said there weren’t some lip-synch issues or that I didn’t notice Zellweger lose the voice just a bit here and there. There are many imperfections. But the real truth was that I was captivated enough by the performance that none of that really broke through. How can you be paying attention to the lip-synch when the character is experiencing such a monumentus metamorphosis here? It’s like watching Moses part the Red Sea and complaining about the muddy ground it left behind. This film won’t be for everyone. The pace is often a bit slow, and there is little else there but pure character. For fans of a good character study, this is the kind of film that only comes “once in a lullaby“.

Gino Sassani is a member of the Southeastern Film Critic's Association (SEFCA). He is a film and television critic based in Tampa, Florida. He's also the Senior Editor here at Upcomingdiscs. Gino started reviewing films in the early 1990's as a segment of his local television show Focus. He's an award-winning recording artist for Omega Records. Gino is currently working on his 8th album Merchants & Mercenaries. Gino took over Upcomingdiscs Dec 1, 2008. He works out of a home theater he calls The Reel World. Favorite films: The Godfather, The Godfather Part II, The Body Snatcher (Val Lewton film with Karloff and Lugosi, not the pod people film), Unforgiven, Gladiator, The Lion King, Jaws, Son Of Frankenstein, The Good, The Bad And The Ugly, and Monsters, Inc.
AQUARELA “31 Nights Of Terror”