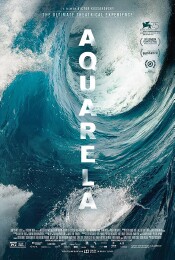 ”AQUARELA takes audiences on a deeply cinematic journey through the transformative beauty and raw power of water. Captured at a rare 96 frames-per-second, the film is a visceral wake-up call that humans are no match for the sheer force and capricious will of Earth’s most precious element. From the precarious frozen waters of Russia’s Lake Baikal to Miami in the throes of Hurricane Irma to Venezuela’s mighty Angel Falls, water is AQUARELA’s main character, with director Victor Kossakovsky capturing her many personalities in startling cinematic clarity. The film will be shown in theaters at 48 frames-per-second, double the typical 24 frames-per-second, as projectors with the ability to project at 96-frames-per-second are extremely rare today, but when the time comes that the capacity is there, AQUARELA will be one of the first films to be shown at that speed.”

When you turn on the faucet and out comes water, do you really know where it all comes from and how much of it flows on the Earth? Enter the documentary Aquarela, with its lavish cinematography of water in all forms everywhere. The movie was made by Victor Kossakovsky, in which he says that his movie “takes audiences on a deeply cinematic journey through the transformative beauty of the raw power of water.” The film is not a political statement for a cause or even a warning of any kind.

There’s so much water circulating on Earth that you would not use the googolplexian amount of it ever. It constantly changes form, causes damage to land masses close to it, feeds the windstorms that bring destruction and provides the necessary potion to stay alive. Whether you use it for washing your car or clothes, mix a drink or pour it down the drain, water the lawn or garden, skate on it or go swimming in it, the substance will always return.

All that said, this movie is Victor Kossakovsky’s offering, and he hopes you will enjoy the feeling of the important elixir as it makes incredible patterns in the ice, crashes down to melt in the sea from ice bergs, drives high waves into the sky of an angry ocean, offers fish and other sea life a home, challenges sea-goers, and yes, even causes death and destruction.

The movie does move you in several ways, through its power to invoke your sense of sight and sound, by tantalizing your brain to react to the incredible beauty and often rage of the sea and even frighten those who have not experienced a furious sea or a tsunami. There have been many movies that have depicted the fury and beauty of water like the movie The Perfect Storm or on TV as in The Deadliest Catch. But it’s not the same feeling as when you witness the pure, live cinematography staring you in the face on a 30 foot by 90 feet screen or larger and coming at you without imperfections at film speed double the norm.

Aquarela has been rated PG by the MPAA for some thematic elements. It’s a must for high school students or any age that wants the thrills, chills, and spills of the effects of water, and especially those who just want to forget their problems for an hour and a half. It’s a onetime experience you may never forget. Just a note: youngsters to pre-teens are most likely to get antsy after the first 20 minutes. Exciting to serene, thrilling to amazing.

John Delia has been on all sides of the movie business from publicity, writing for publications and on line blogs, script writing, to film making. Writer, critic, film editor he has worked as a film critic on this second go around for 14 years. He earned his Bachelor’s degree at the college of Journalism and Communications at the University of Florida in Gainesville, Florida. John is an active member of the Southeastern Film Critics Association (SEFCA) . Favorite Films: Lord of the Rings/Hobbit trilogies, The Godfather trilogy, the Indiana Jones trilogy (I didn't like the 4th), The Avengers and for TV it's Game of Thrones. As for animation it's a tie between anything Pixar and everything Hayao Miyazaki.
Shaft (2019) (Blu-ray) Judy