Posted in: The Reel World by Brent Lorentson on October 4th, 2019 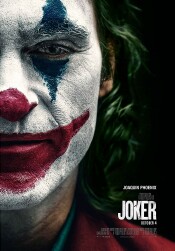 “Art is dangerous.”  It’s a quote that has been passed around over the decades, and it’s something I tend to agree with.  Over the weeks building up to the release of the film, there seems to be a manufactured panic about what could happen when Joker releases onto the big screen.  In Aurora, Colorado, they’ve elected to not show the film as a way to not trigger local residents who were involved in the 2012 shooting. This I can understand, considering the shooter did indeed dress as the Joker when he committed his act of violence.  As for other parts of the US, the local police and military have been placed on high alert, all because people are worried about the gun violence and how it may motivate deranged fans to go on shooting sprees.  This obviously is not what the studios or filmmakers ever intended, but it is unfortunately a sign of the times that we are living in.  No one should have to fear going to the movies. The theater for many is the place for audiences to escape for two hours and forget the troubles and the horrors of the real world, and my hope is audiences will be able to do so without violent incidents.

To be fair, Joker isn’t the first film to have the spotlight thrust upon it due to its violence, nor will it be the last. A part of me wonders if the controversy was even manufactured to create more buzz for the film. After all, scaring audiences has always been a powerful tool in marketing, when you look back at the films of William Castle and Roger Corman.  For some of their films, audiences would have to sign waivers to ensure the studio wouldn’t be at fault if anything were to happen to audience members while watching the film, while having ambulances parked outside the movie house.  Is it a stretch to believe the studios would do this? Maybe.  But is it possible, considering how the box office is underperforming, that people will attempt to create buzz for the film?  And then there are the political motivations, attempting to use a film in the fight for control.  So many possibilities, so much controversy, and still as I write this the film hasn’t even been released to the masses for them to judge for themselves.

Whether you read comic books or not, The Joker is simply a character you know. He’s a pop-culture icon who has a ravenous fan-base who adore this villain. What director Todd Phillips gives us in Joker is not simply an origin story (one that bears little to no resemblance to what we’ve seen in the comics or films), and in telling this story he attempts to ground it in reality and humanize the character we first meet as Arthur Fleck.  It’s a bold move, but what’s more impressive is that he’s created an anti-hero, and because of the amazing performance from Joaquin Phoenix, he manages to make the character one we can sympathize with.  Phoenix, who has been known for immersing himself into roles, has done so again in such a convincing manner that it’s easy to forget this was the same guy who once played Johnny Cash (Walk the Line) or Commodus (Gladiator). Most likely this will be the role he will be most remembered for.

I know there will be those coming to the defense of Heath Ledger’s performance, and for the Nolan universe that Joker was perfect for those films, but for this film, it stands alone, and you have to ignore canon. Sure, this is still the DC universe, and besides Joker we do see some familiar characters who inhabit Gotham City, but don’t expect any big superhero showdowns, because this is not that film. Very early in the production Martin Scorsese almost came on board the project but had to back out due to filming The Irishman, but still this film has Scorsese’s influence all over it.  Taxi Driver and The King of Comedy are the two films Joker most resembles, and as a fan of both of those films, I enjoyed what Philips delivers.  As he was channeling those films, I’m glad he was able to bring Robert De Niro on board to play a Johnny-Carson-like TV late night host, Murray Franklin.  Arthur and his ill mother, Penny (Frances Conroy) have a nightly routine of watching the Murray Franklin show, and Arthur has big dreams of becoming a comedian and one day being on the late-night show.  It’s these dreams that give a glimpse into how unbalanced Arthur is as we see him escape reality and interact with this dream world, and as the film plays out, we have to wonder how much of it is real and how much of it he has created.

The script from Todd Phillips and Scott Silver is something fresh and unexpected from the guy who brought us the Hangover movies and Old School.  Over his career, though, he’s done some pretty good films. War Dogs is a great underappreciated film, for instance.  Even in his early years, he did a documentary on GG Allen (for those who really go down the rabbit hole with Joker, you’ll see an Easter egg in the film that connects to another “evil” clown).  For those thinking Phillips may not have the skills to tackle this project, prepare to be surprised.

The visual choices this film makes are another key to what makes this such a visceral experience.  We often times see Arthur in alleyways, or on staircases between buildings, or in closed spaces, and this simply gives visual cues to signify the isolation the character is feeling and experiencing.  Then there is the visual color scheme and grime the film has that gives it that late-70’s/early-80’s film style that helps capture the filthy New York vibe of Gotham in the early 80’s.  Along with the strength of the visuals, the score by Hildur Guonadottir is phenomenal, easily one of the best scores of the year, and does a great job at enhancing the film’s often intense moments.  There are a variety of older songs that work their way into the film as well. We got a glimpse of this in the trailers, but it doesn’t do the film justice. All I’ll give away is when Rock N Roll Part 2 by Gary Glitter kicks in, it’s an epic moment that takes the film into a great final act.

As for the actual violence in the film, I felt this needed to be saved for last, because I really want people on the fence with this film to know there is a lot of good stuff in this film so that it’s worth seeing no matter what.  We see early on in the film how Arthur is the victim of violence and how the people all around him treat him badly.  There are a few exceptions, but for the most part this film reflects society and how many view our mentally ill. We know they exist, but we’d rather look the other way and ignore them till it’s too late — either they die, or they do something horrible.  When Arthur commits his first act of violence, you can understand it. You may not agree with it, but on a certain level, you can see why it happened.  As the film progresses, we see how the media depicts the victims, but surprisingly it’s how the people of Gotham react, and we see an uprising occurring between the rich and the poor.  This is unnerving, and it should be for audiences, because this is a very real scenario that we’ve seen before and could be taken to a larger scale.  This all continues to build to the third act, and it’s this third act I feel is what makes this film great and makes it art with something very powerful to say. In many ways it’s a poke at the “woke” generation, but like most works of art, people will all come away with a different opinion. I hope this can create a discussion.

For those wondering if they should take a risk and see the film … I’m a firm believer that films don’t create violent people; instead, it’s done by those who are already sick to begin with.  Don’t let fear win. At the end of the day, it is only a movie.  I’d recommend not bringing younger kids (under 12) to this film, simply because it’s rated R with good reason.  If anything, when leaving this film you should realize that there are numerous Arthur Flecks in the world and how much you can actually do to make a difference by being a little nicer to each other.

Brent Lorentson is a horror writer and film critic based out of Tampa, Florida. With a BA in Digital Film, he co-wrote and co-directed Scavenger Hunt. His short stories have appeared in various horror anthologies. In 2019 his short script Fertile Blood will be a part of the anthology horror film Slumber Party. He is currently working on his first novel A Dark and Secret Place set to be released in late 2019. Favorite Films: Taxi Driver, Fight Club, I Saw the Devil, The Wild Bunch, Dawn of the Dead, A Clockwork Orange, Pulp Fiction, Heathers, The Monster Squad, and High Fidelity.
“31 Nights Of Terror” Contest: Win Vampirina: Ghoul Girls Rock From Disney Junior “31 Nights Of Terror” The Addams Family/Addams Family Values 2 Movie Collection