Posted in: No Huddle by Gino Sassani on October 8th, 2019 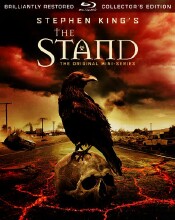 “This is the way the world ends…”

The Stephen King cycle has turned hot once again. With the enormous success of the two-part It feature at the box office, Stephen King is hitting the kind of popularity he had back in the 1980’s and 1990’s when it seemed anything he put his name to had to be made into a feature film or some other grand project. The trend led to mixed results. Many of the films couldn’t live up to the visceral detail that has become King’s trademark. To do this, his books have taken on a large page count that has been nearly impossible to fit into a 2-hour feature film window. So there were attempts to expand that reach and use his material for the mini-series format. That’s the way It was handled in those days. But there are limitations in network television, particularly 30 years ago, that had no chance of capturing the imagination of a writer with such brutal imagery. The lesson has taken hold. It was released as two films. But back in the day, it appears that even seven hours couldn’t quite deliver a quality version of The Stand. Even with a brilliant cast and a script written by the horror master himself, the mini-series fell short of both expectations and the test of time. But like I said, Stephen King is back. He’s got a shared world television series, a two-part blockbuster horror film, and an upcoming attempt to take another bite at the apple that is The Stand. What better time to take a nostalgic look at the 1994 mini-series The Stand now out on Blu-ray from CBS Home Entertainment.

The story opens with at a secret military base where biological weapons are being developed. There’s no time to investigate what these folks were working on or where it might have gone wrong. We jump in feet first as alarm bells are ringing and a gate guard flees to protect his own family rather than follow the order to seal the base. He and his family hit the road, but the genie is already out of the bottle. The family ends up halfway across the country in a little Texas town where they crash at a gas station. The plague spreads rapidly from there. As the song goes: “It’s the end of the world as we know it.”

The mini-series takes little time to show the spread of the illness. The next thing we know we have been invited into a world where a very small percentage of the population has survived. Civilization has fallen, and we’re left with just a few immune people to carry the torch for humanity. They stumble about this barren landscape and eventually get together in small groups. They are also each having very specific lucid dreams where they encounter an old woman named Mother Abigail (Dee). She encourages them to come find her, and clues are given to where she might be. The survivors are drawn to her location as if she were a beacon from God. But mother Abigail isn’t the only dream persona the survivors encounter in their sleep. There is also a dark figure who is often called The Walking Man, and he’s taken the human name of Randall Flagg (Sheridan). He is also compelling survivors to follow him. With the table set, we quickly understand that the survivors will be split into two camps. Those who follow Mother Abigail hope to create a safe place for them to continue. Others will flock to Flagg, who intends to bring a true hell on Earth to the devastated world.

Much of the series explores these factions and the individuals who make them up. On the Mother Abigail side you have:

Stu Redman, played by Gary Sinese. Stu was there when the base family crashed into the gas station. After being prodded by the government because of his immunity, he soon ends up on the road when it all falls apart. He’s a natural leader. Frannie Goldsmith is played by Molly Ringwald. She’s a small town girl who ends up by Stu’s side. She is going to have the new world’s first child. Judge Farris is played by Ossie Davis and represents something of the order of the old society. Adam Stroke plays Larry Underwood, who was just about to become a rock star. His first single was climbing the charts when it all came crashing down. He was looking forward to living an irresponsible life of sex, drugs, and rock ‘n’ roll, but finds an inner strength he didn’t know he had in this new reality. My Favorite Martian‘s Ray Walston plays Glen Bateman, a character with much more to do in the novel but becomes somewhat the emotional heart of this group dynamic. He’s a painter who along with his dog doesn’t really appear to have had his life changed much by the plague. Finally there is Rob Lowe as Nick Andros, a deaf/mute who befriends the simple-minded but big-hearted Tom Cullen, played by Bill Fagerbakke. M O O N, that spells Tom Cullen.

The other side starts with Miguel Ferrer as Lloyd Henried, a crook who ends up stranded in a prison cell starving to death when the plague hits. He’s rescued by Flagg and becomes his right-hand man. Matt Frewer is Trashcan Man, a pyromaniac who is tasked with setting oil tanks ablaze as he makes his way to Vegas where Flagg has planted his…eh…flag, so to speak. Laura San Giacomo plays Nadine Cross, who is tasked with seducing members of the good guys and becomes his inside lady. She ends up pushing Harold Lauder (Nemec) to the dark side when he sees Stu take Molly, who he thought of as his girl since they were kids.

The rest of the series slowly brings these elements together for what is promised will be a final showdown. And that’s where it all goes off the rails. The mini-series spends a great majority of its time getting to know these characters, and there are some great moments there, to be sure. This is a solid cast, and the characterizations are the best part of the show. The fatal flaw is that there isn’t enough time left to truly embrace the conflict and all of the things that happen to these factions. King does a wonderful job in his novel, but here he takes too much for granted, and we get awkward time jumps with no explanation or reference points. He expects us to have read the book, but it really doesn’t work that way, and the show falls apart. Things happen far too quickly, and the end is so anti-climactic. Without King’s own nuances, the ending appears rather pointless and certainly not worthy of the events that lead us there. Honestly, the good faction ends up having no real input into the finale that comes from an internal struggle of the dark forces.

I have some hopes for the new attempt. Another mini-series might be the way to go, but only because the landscape of television has changed quite dramatically since the 1990’s. There is cutting-edge stuff appearing on the cable networks, and the production tools available today are light years ahead of anything they had in the mid 1990’s. I hope they find a way to maintain this wonderful character development but also take us deeper into the story. This release is a good way to catch up on what came before, but this isn’t as good as I remembered. It didn’t quite hold up to the test of time. Mother Abigail, “How did you not see this coming?”

Gino Sassani is a member of the Southeastern Film Critic's Association (SEFCA). He is a film and television critic based in Tampa, Florida. He's also the Senior Editor here at Upcomingdiscs. Gino started reviewing films in the early 1990's as a segment of his local television show Focus. He's an award-winning recording artist for Omega Records. Gino is currently working on his 8th album Merchants & Mercenaries. Gino took over Upcomingdiscs Dec 1, 2008. He works out of a home theater he calls The Reel World. Favorite films: The Godfather, The Godfather Part II, The Body Snatcher (Val Lewton film with Karloff and Lugosi, not the pod people film), Unforgiven, Gladiator, The Lion King, Jaws, Son Of Frankenstein, The Good, The Bad And The Ugly, and Monsters, Inc.
“31 Nights Of Terror” Diabolik DVD: Demented Discs From The World Over “31 Nights Of Terror” American Horror Story: Apocalypse