Posted in: No Huddle by Jeremy Butler on October 9th, 2019 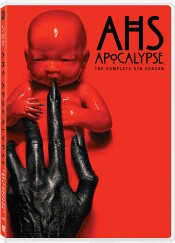 “Satan has one son, but my sisters are legion, mother%&#@er!”

Another fine addition for 31 Nights of  Terror, and this one has horror right in the title. If that doesn’t spell meant to be, I don’t know what does. Season 8 of FX’s anthology series, American Horror Story: Apocalypse was much more than advertised. Going in, I had only seen Season 1 (Murder House) and glanced at Season 3, which introduced Emma Roberts and Kathy Bates to the series. Fortunately, as an anthology series, each season is a stand-alone: same cast, different characters and scenario. This season dealt with the end of the world, because what’s scarier than that. Coming back into the series with a seven-season gap, I expected that my ability to enjoy the story would be challenged. I’m glad to say that the series kept me on my toes and interested with every episode. Not to mention, as an added bonus, this season incorporated characters and ties to from both Season 1 and Season 3.

Episode 1 set the scene for the end of the world. Nuclear missiles are launched from across the world at every major international city, effectively destroying the world. Those who survive the initial strike become disfigured from the subsequent radiation, with the exception of those who have paid for passage in secure bunkers or those with superior genetics suited for repopulating the world.

This was an interesting premise, and in the first few episodes we can see cabin fever setting in. It is obvious that an inevitable psychological break is coming, or least this was direction that I figured things were eventually going to head. That is, until Episode 3 (Forbidden Fruit), when some familiar faces from previous seasons make their appearance. This fundamentally changed the direction of the story, including the cause of the Apocalypse. Granted a move of this nature is a risky endeavor, as you risk losing audience members invested in the previous version of events.

To its credit, this shift is handled in a plausible and easy-to-digest manner. Additionally, this established continuity between the seasons as well as providing the opportunity to reconnect with beloved characters, especially Emma Roberts’ Madison Montgomery, who is just as sharp-tongued as ever. Roberts’ character was a breakout performance in Season 3, and it is no exception here in Season 8, as she injects much-needed comedy via her quips.

There are some things that teeter on the line of cheesiness, such as android with a machine arm or the Avengers Endgame time travel, which ultimately feels like hitting reset on a video game. Those things aside, this was a great season. I would consider it more as a continuation of the Coven season, but as far as I’m concerned, there is nothing wrong with that.

Notable episodes include Forbidden Fruit, which as I said completely changed the landscape of the rest of the season. It is also the episode that transforms this season into Coven 2.0.  Returned to Murder House is another notable episode as it provided finality to a burning question regarding the fate of the baby that Tate fathered with Violet’s mother. Additionally, we also gain answers regarding the relationship between Violet and Tate, because as you remember at the end of Season 1 (if this going to be a spoiler, I advise you to stop reading now; then again, if you are jumping into television show with the eighth season, you deserve a spoiler), Tate had resigned himself to wait for Violet however long it took. Needless to say, I believe that the audience will be grateful for that conclusion.

Notable performances, and making this selection is no easy task given the sheer talent involved with this series, obviously include Emma Roberts, who keeps the plot from becoming too stuffy or overly serious by providing much needed comedic relief. Newcomer Cody Fern (American Crime Story: The Assassination of Gianni Versace), makes his presence known in his role as Michael Langdon. In flashbacks, he projected childlike innocence despite his obvious dark nature, and palpable intensity in the early episodes, especially during the interview scene between him and Evan Peters. Finally, Sarah Paulson, who pulled triple duty playing a new character as well as revitalizing two characters from previous season. Paulson has been a staple of the series from early on, but in my opinion, it was her monolog (which also features the line at the beginning of the review) during the season final confrontation that makes her the breakout star of this season.

American Horror Story’s next season (1984) is due premiere later this month (and Season 10 has already been greenlit), and I’m sure that it will be good. However, I find it difficult to believe that it can top this season, which as far as I’m concerned set the bar. That said, I welcome the challenge as good storytelling, clearly a reason that the show has been able to maintain such a robust cast that includes so many well-known actors. As far as this season is concerned, let’s just say it has re-established my enthusiasm for the series.

Jeremy Butler is a film school graduate of the International Academy of Design and Technology. He is been writing for Upcomingdiscs since 2012; however, movies have played a big part of his life for much longer. Favorite genres include horror, science fiction/fantasy, and comedy. Favorite movies are V for Vendetta, Boondocks Saints, Kiss Kiss Bang Bang, and The Godfather.
“31 Nights Of Terror” Stephen King’s The Stand “31 Nights Of Terror” Contest: Win Tell Me A Story The Complete First Season On DVD From CBS