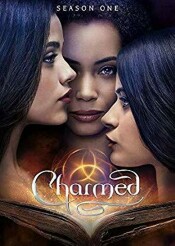 In 2006, the original Charmed series did its final curtain call, and since then fans have been calling for the series to resume. In this era of revitalizing old television series, it seemed like bringing back the popular witch series was a possibility. In 2018, fans got their wish, although perhaps not quite the way they were hoping to get it. Charmed would be brought back, but as a reboot, not a continuation. This means a brand new cast and a modern twist. As you expect, this decision was not completely popular, as fans of the original series called for the return of the original cast. As a fan of the original series, I was among those who felt a version of the series that did not feature Alyssa Milano, Holly Marie Combs, and Rose McGowan would be a waste of time and resources. Hell, I would have even taken a miraculous return of Shannon Doherty. Then again, may not. Anyhow, the decision to revamp the series was not a popular one, but in the end, I believe it was the right decision.

In this incarnation, the series moves from San Francisco to the fictional town of Hilltowne, The sisters are not Latin America, and the letter they all share is a “M” instead of a “P.” Those are the major changes. I gave them to you up front so that you can prepare yourself for everything else. In the opening episode, sisters Mel (Melonie Diaz) and Maggie (Sarah Jeffery) live with their mother, Marisol, and are unaware of their magical heritage until Marisol’s death, which is the incident that sparks the series. Following the death of Marisol, they are approached by Macy Vaughn (Madeleine Mantock), who tells them that she is their half-sister. The introduction of a half-sibling pays great homage to the original series, which as diehard fans recall, served as the introduction of Rose McGowan into the series in Season 4 following the departure of Shannon Doherty at the end of Season 3. Getting back on point, the sisters being united triggers the activation of their individual powers as well as the power of 3, their ultimate strength.

Going into their powers, I must prepare you for another change. As fans remember, the sisters possess one individual power, such as telekinesis, time manipulation, or premonition. Telekinesis and time manipulation are still present in the reboot with the characters based on Prue (Macy) and Piper (Mel) developing this power respectively. However, in the case of Maggie, premonition is not her power, but rather she is an empath. This is a deviation, but still within the realm of acceptable, because as you recall, Phoebe also became an empath in the later seasons. Ultimately, I feel empathy is more screen-friendly than premonition, which in the original series usually served as the way the Charmed Ones were alerted to an issue. The reboot focuses on news of suspicious deaths to alert the Charmed Ones, adding to the threat of discovery.

Modernization was this series’ friend in my opinion. Instead of clinging to the themes of the past, it attempts to establish its own story. It is a risky move, but ultimately the better option. It goes its own way, choosing to utilize a more ethnically diverse cast, as sisters are Latin American and Afro-Latinas. It also embraces different sexualities, as Mel is a lesbian. These modern changes allowed the series to fit perfectly into the changing landscape of the television.

The show features a monster-of-the-week format, but almost a sharper focus toward building story arcs. It is inventive in how it tackles the characters’ relationship; such is the case with Mel, who finds her relationship with her girlfriend Niko threatened by the recent discovery that she is a witch, which prompts her to take drastic action. Then there is Maggie, who like the counterpart she is based on has a thing for bad boys with a heart of gold. Shout out to Julian McMahon, who played my favorite character on the original series. I wonder what he thinks of the character who is clearly based on him. Back on topic: though these subplots have familiarity with the original series, there is one involving Macy and her origins that helps the reboot to break away from the established template. This plot is what ultimately leads to the explosive season finale, which serves as one of the season’s notable episode as the sisters find their lives once again changed.

Other notable episodes include “Exorcise Your Demons” which introduced Elders into the series. Another notable thing is the change to the backstory of elders. I know it seems like so much has changed, but this change I believe made more sense regarding the relationship between the Elders and witches. “Keep Calm and Harry On” sees the girls’ Whitelighter (yes, the series still has those), Harry, in danger and also serves to add emotional depth to this character, as well as solidify the relationship between the Charmed Ones and their Whitelighter.

As you can see, there are many things different between this reboot and the original series. However, there are many things that pay homage or that remain faithful to its source materials. Think of the series as its own universe rather than a continuation. That is what I had to do, and I was able to enjoy the series. It is a good show, with interesting characters and engaging storylines. So it is no wonder that it was renewed for a second season, which is due to premiere tonight. I will be tuning in, and I’m sure that after you watch Season 1, you will be too.

Jeremy Butler is a film school graduate of the International Academy of Design and Technology. He is been writing for Upcomingdiscs since 2012; however, movies have played a big part of his life for much longer. Favorite genres include horror, science fiction/fantasy, and comedy. Favorite movies are V for Vendetta, Boondocks Saints, Kiss Kiss Bang Bang, and The Godfather.
“31 Nights Of Terror” Child’s Play (2019) “31 Nights Of Terror” The Addams Family (2019)