Posted in: Disc Reviews by Gino Sassani on October 12th, 2019 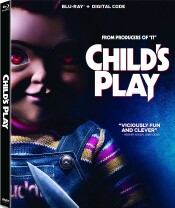 “Did you say Chucky?”

The 70’s and 80’s were fertile ground for horror films. It was a new era of iconic monsters. Starting with Michael Myers and Jason, the trend that gave us Freddy seemed to be at the end of its run by the late 1980’s. Certainly sequels were still being churned out, but it seemed like we’d seen the last of these maniacal monsters, at least for a while. But before it petered out, the cycle would supply our nightmares with one more notable denizen…Chucky. Later Chucky would pace the sidelines here in Tampa as the head coach of the local NFL franchise, but for the last 20 years it was the darkest alleyways of our dreams that Chucky prowled. Inhabited by the soul of a killer, Chucky was truly one of the “Good Guys”. Child’s Play was the brainchild of writer Don Mancini. Mancini’s original story Batteries Not Included was changed because of the impending Spielberg film to Blood Buddies. The title and many aspects of the story would evolve over time. Eventually the title Child’s Play took over, and Chucky was born.

In this version of Child’s Play we once again have a young loner kid named Andy (Bateman). He and his mother Karen (Plaza) have moved away from a bad family situation. She works at a department store where she swipes a returned Buddi doll for her son’s birthday. The doll was altered at the factory by a worker who then killed himself. He removed anti-violence checks. For Star Trek fans it’s like when the holodeck safety protocols got removed, which happened all the time, right. Andy soon discovers that Chucky will go to any lengths to protect him, and the bloodshed spreads from there.

The rights to the franchise have taken one of those complicated turns. The film rights belong to one group, while the characters and some story elements belong to another. That means we’re going to see more than one reincarnation of Chucky in the coming months. There is a television series that is already in production that will be the true carrying of the torch for the original Chucky. What we’ve gotten first was a new screen version of the franchise that has totally rewritten the mythology to become something very different from the Chucky we already know and love.

There is good and bad in this new version. The story itself is one of the more clever aspects of the whole thing. The original story centered on a doll that was possessed by the soul of an evil guy who is gunned down at the doll factory. This version does away with all of that. I rather like the new story idea. The doll in question now is something called Buddi. He’s an AI doll that interconnects with all of your household smart devices. So that means this Chucky can play with your lights, turn on the television, or lock your doors. It’s the next step from those personal assistant devices many of us have that already control our smart homes and devices. This was absolutely the evolution to the next stage of Chucky, but the film fails miserably to truly explore its new roots. It all builds up to this horrifying reality not far from what already exists, but they never take advantage of that setup. Someone dropped the ball, and a lot of potential goes to waste here. The design of the doll itself doesn’t come close to the original design and looks like a Christopher Walken doll without the clever expression nuances. The design is bad to the point of distraction. I honestly hated this new look for Chucky. The film had some pretty cool elements that it ignored, leaving us with a pale imitation of what has gone before. Even Mark Hamill’s rather strong voice of Chucky couldn’t save this one.

Child’s Play is presented in its original aspect ratio of 2.39:1. The 1080p image is arrived at with an AVC MPEG-4 codec at an average 30-35 mbps. I was happy to see the film still utilized some a lot of practical effects for the doll. It adds something to this high-definition image presentation that the few computer-generated shots simply don’t have. You can really tell when the doll is real and when it’s not. The film is dark and moody, relying on pretty strong black levels and above-average shadow definition. Detail is nice on the doll and would have been better had the design been better. The colors of the doll costume are nicely defined and stand out as a cool call back to the original Chucky.

The DTS-HD Master Audio 5.1 track is really nothing very special. The ambient sounds often add some elements of creepiness into the mix, but most of the time settle for a very front loaded experience. Dialog is clear, and the overall quality of the sound is acceptable. Music cues do tend to border on the harsh at times. The really nice music cues are the little tributes to the original music.

The Making Of Child’s Play (5:05) This is too brief to offer much more than some promotional value. Entirely too many clips and a few cast and crew insights with very limited behind-the-scenes footage.

Bringing Child’s Play’s Chucky To Life: (4:28) Again too brief to offer much substance. You do get a sense of the various tricks used to create the new Chucky.

The split in the property is a bit of a disappointment to me, and Don Mancini had nothing to do with this reboot. He is involved in the television series, and I actually have higher hopes for that project. Of course, only time will tell, and this is what we have for now. But the Chucky we all know and love still might have some life left in those “Good Guys” batteries. I was a little bummed, “But I’m all better now.”

Gino Sassani is a member of the Southeastern Film Critic's Association (SEFCA). He is a film and television critic based in Tampa, Florida. He's also the Senior Editor here at Upcomingdiscs. Gino started reviewing films in the early 1990's as a segment of his local television show Focus. He's an award-winning recording artist for Omega Records. Gino is currently working on his 8th album Merchants & Mercenaries. Gino took over Upcomingdiscs Dec 1, 2008. He works out of a home theater he calls The Reel World. Favorite films: The Godfather, The Godfather Part II, The Body Snatcher (Val Lewton film with Karloff and Lugosi, not the pod people film), Unforgiven, Gladiator, The Lion King, Jaws, Son Of Frankenstein, The Good, The Bad And The Ugly, and Monsters, Inc.
“31 Nights Of Terror” Annabelle Comes Home (Blu-ray) “31 Nights Of Terror” Charmed (2018): Season 1