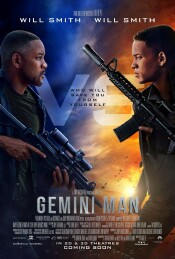 It may be similar to other sci-fi films of its kind, but Gemini Man tips the scale with action and storyline.  The CGI is incredible, and the re-aging of Will Smith amazing in this assassin vs. clone movie that will knock your socks off. Oh, and the answer is yes, Will Smith plays both parts with seamless detail. A crack shot and assassin for a US government special ops, Henry Brogan (Will Smith) has set himself up on a hill readying himself to kill someone in a fast moving train.  As the train passes by he makes the kill shot, but it almost puts a bullet in a child nearby.  Deciding to retire, he tells his boss that it’s time because there’s a good chance he’ll botch the next job.

In a small out-of-the-way village in the United States, Brogan makes his first day of retirement a chance to do some fishing.  Going to the pier he meets Danny (Mary Elizabeth Winstead), the person in charge of boat rentals. His keen sense for trouble and his ability to identify when someone is not who they say they are leads Brogan to believe he’s being set up.  With the help of Danny he escapes the hit, and the two go on the run looking for answers.

Things get very dangerous for the two and they flee to Cartagena, Columbia with the help of Brogan’s best friend, Baron (Benedict Wong). When they realize that the head of the secret operation Gemini, Clay Varris (Clive Owen), has set up Brogan, the three put together a plan to hide their tracks.  But a mysterious assassin is on their trail, and he looks exactly like Brogan’s younger self.

Director Ang Lee does a terrific job of storytelling and putting the fast action movie on the screen with the help of master of action films Jerry Bruckheimer as producer.  Using a fine mix of CGI, motion capture, special cinematography effects, and camera synchronization techniques, he puts the audience on a rollercoaster ride with no end in sight.  When he finally slows it down, it’s time to take a breath and get back to a less rocky road drama.

It’s the action created by a great cast that delights fans of the genre, and there’s plenty of it in Gemini Man.  And the actors who do it best are on board in the film, including star of the show Will Smith.  He’s relentless as Brogan, giving all he can to his character. And when it’s two of them at the same time, you begin to think that he actually may have a body double.  Even though it’s all him, the technology still isn’t there to make a completely durable model in order to make a perfect copy. One of my favorite actors, Smith proves once again the he can keep up with the likes of other action heroes and turn in a great performance.

The surprise here in the acting department is Mary Elizabeth Winstead as Danny, who puts on an exciting show as the collaborator to Brogan. In the wrong place at the right time, she’s enlisted to help Brogan escape, and the audience gets the show of their lives as she takes down adversaries. Quite athletic, she fits right into the role of a member of the Defense Intelligence Agency who’s trained in weaponry and martial arts.

Another good film from Ang Lee.

John Delia has been on all sides of the movie business from publicity, writing for publications and on line blogs, script writing, to film making. Writer, critic, film editor he has worked as a film critic on this second go around for 14 years. He earned his Bachelor’s degree at the college of Journalism and Communications at the University of Florida in Gainesville, Florida. John is an active member of the Southeastern Film Critics Association (SEFCA) . Favorite Films: Lord of the Rings/Hobbit trilogies, The Godfather trilogy, the Indiana Jones trilogy (I didn't like the 4th), The Avengers and for TV it's Game of Thrones. As for animation it's a tie between anything Pixar and everything Hayao Miyazaki.
“31 Nights Of Terror” The Addams Family (2019) Light of My Life (Blu-ray)