Light of My Life (Blu-ray)

Posted in: Disc Reviews by Brent Lorentson on October 15th, 2019 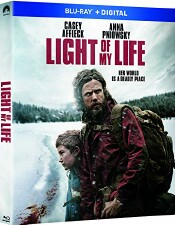 I wonder how this film would have been received if The Road simply didn’t exist.  It’s just about impossible to watch this film and not see the striking similarities between the films, though Light of My Life definitely isn’t as grim or as brutal as The Road.  Light of My Life is the directorial debut from Casey Affleck, who seems to be following in his brother’s footsteps by taking the step behind the camera.  How does he fare behind the camera?  He definitely shows that he has a solid eye when setting up his shots and telling a story, though there is certainly room for him to improve.  It’s a bold move to make a post-apocalyptic film your first feature and decide to star in the film as well, but for me I was glad to see him take such a risk, and I’m impressed he almost nailed it. The film takes us into a world where most of the world’s female population has been killed off by some sort of a disease.  While the world isn’t quite in shambles, we definitely see that society has quickly crumbled as cities struggle to thrive. Rag (Anna Pniowsky) has somehow managed to survive this vicious disease, and with the aid of her Dad (Casey Affleck) he’s kept her alive and has been training her to survive in this hostile environment.  This is pretty much a father’s worst nightmare for his daughter to grow up in, and we get to see how her father deals with everything from suspicious travelers to simply educating her on puberty.  By keeping the film focused on the relationship between the father and daughter, the film excels at getting us involved and attached to this pair, but we also know in this type of film there are some inevitable bad things to come.  Here is the problem: the film manages to pull its punches when it comes to the danger of the world they exist in. Sure, things are hinted at, but for a majority of the film everything feels like it’s building to something that never occurs.

Do things need to be as bleak or as in-your-face as The Road for this to be good?  No, but for a film that has an R rating this feels like a very neutered film that just is afraid to go dark.  It’s obvious this film wants to be about a father’s love and show the extent a father will go to protect their child, but really I don’t believe this father figure would survive in this world or succeed at protecting his child as well as he has.  We don’t get to see Rag as a hunter, or having much if any ability to defend herself if someone were to attack her. You’d think these would be things he’d want to teach her, but instead he’s invested in teaching her to run and hide.

In the opening scene we get to see Rag’s father tell her story, one she begs him not to make about her, while he continues to tell the story which is still about her but helps set the viewer up for the story that is to follow.  There’s a nice takeaway I get from it where he’s bringing up the value of female characters. Over the course of the film Rag is the lone female but is told to be a boy as a way of keeping her safe.  As we see Rag struggle with her identity like when she finally finds some girl’s clothes that fit her, but her excitement is extinguished when her father yells at her, not wanting her to reveal her true identity.  Is this a sprinkle of social commentary that Affleck is injecting into his script, or is this a simple plot device to give a greater depth to the struggle his character is having?

There are some fun and suspenseful moments, like when Rag and her father discover a home that has been abandoned, and once they get settled it’s not long before men come a-knocking looking for the kid.  As you watch you’ll need to remind yourself this isn’t The Road; things don’t get brutal or terrifying.  It’s really not till the third act that the tension really amps up.

Thankfully there is some beautiful scenery to sit back and enjoy.  The cinematography is easily the selling point of this film, and the harsh, wintry backdrops do well in helping us get immersed in this world.

One of the bright spots in the film is when the father has flashbacks to his wife and Rag’s mother, played by Elisabeth Moss.  While these scenes work well in developing Affleck’s character and show him making his promises to his dying wife about how he’ll protect their daughter, these scenes could easily have been removed from the film, and it wouldn’t change a thing.  The film feels long at just over two hours, and I feel this film could have performed better with a leaner film time.

Light of My Life  is presented in the aspect ratio 1.66:1.  The 1080p image is arrived at with an AVC MPEG-4 codec at an average of 39 mbps.  This is a gloomy-looking movie that captures the hostile nature that surrounds the father and daughter.  There isn’t anything in the way of bright vibrant colors; everything is drab and faded.  Some of the detail in the film is beautiful. There is a moment in the woods when the camera is looking through the trees in the snow, and the sharpness of the picture is impressive.  One of the film’s strengths is its visuals, and considering this is on a Blu-50 without extras, the disc space is properly utilized to deliver the best picture possible.  The only issue is that the film is shot in low-light situations, so in certain scenes like the opening sequence where they are in the dark there is some detectable noise, but nothing that takes away from the film.

The DTS HD-Master Audio 5.1 track has an impressive sound design that carries some rather intense moments in the film.  When we are with the father and daughter as they are hiding in the house, we can hear the approaching footsteps and noises from the intruders all around us.  The score is subtle but works nicely to accentuate the more heightened dramatic scenes. Despite being a dialog-heavy film at times, what makes this an immersive experience is the ambient noise when they are out in the woods; the attention to detail in these scenes is a nice touch.

There are no Special Features

Light of My Life is a film I enjoyed, but I just don’t know if I’ll remember it a couple months from now.  While it reminds me of films like Leave No Trace and The Road, it definitely doesn’t carry the emotional punch that those two films do.  If you happen to catch it on Netflix or Prime, sure, it’s worth giving a shot, but I wouldn’t go out of my way to hunt this title down.

Brent Lorentson is a horror writer and film critic based out of Tampa, Florida. With a BA in Digital Film, he co-wrote and co-directed Scavenger Hunt. His short stories have appeared in various horror anthologies. In 2019 his short script Fertile Blood will be a part of the anthology horror film Slumber Party. He is currently working on his first novel A Dark and Secret Place set to be released in late 2019. Favorite Films: Taxi Driver, Fight Club, I Saw the Devil, The Wild Bunch, Dawn of the Dead, A Clockwork Orange, Pulp Fiction, Heathers, The Monster Squad, and High Fidelity.
Gemini Man (2019) Toy Story 4 (UHD Blu-ray) (4K)