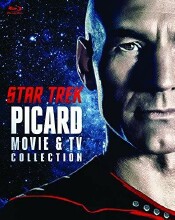 Nearly 20 years after the original Star Trek left the network airwaves, Gene Roddenberry set out to discover if he could catch lightning in a bottle once again. Some say he did an even better job with Star Trek: The Next Generation. There are times I tend to agree. The Star Trek sequel series had a lot more advantages from the moment it was conceived. Star Trek, a series that barely registered on the ratings during its three-year primetime voyage, became a huge sensation in syndication. By the time Next Generation came on the scene, the original show had been syndicated in over 20 different languages all over the world. It had launched an animated series, and a fifth feature film was already in the early stages of consideration. So it isn’t quite fair to judge the success or quality of The Next Generation over the original series. One thing is inarguable. The second would never have existed if not for the first.

The show did have some things working against it. There was the wrath not of Khan but of millions of Star Trek fans if they didn’t get it right. Beloved shows are almost never successful a second time. The show was also going to appear directly in syndication, where the first show really broke out. That’s fine for second run, but it was not a smart move in 1986 for a first-run series. It had never been done successfully, and it would mean markets where the show simply wouldn’t even be available. There was no internet or streaming shows back then. Now, this did also provide an advantage in that there were no network censors to deal with, and Roddenberry would finally have the freedom he never had in the 1960s to tell the stories he wanted to tell in the way he wanted to tell them. With all of this, the future didn’t look so bright for this sequel.

But the one thing Roddenberry did do right was to expand rather than remake his original show. It was still too early for fans to accept other actors in the roles of Kirk and Spock. Too often shows try to reinvent characters that appear to kiss off the original fans. ABC’s attempt to remake Kolchak: The Night Stalker is a good example. Imagine if their character had been a relative of the original Kolchak instead of trying to completely change the personality of the original. Roddenberry wasn’t remaking Star Trek. He brought us a new Enterprise with a new crew and a glimpse nearly 100 years into the future of the old show. It was a rather brilliant move, and it certainly resurrected Star Trek to new heights. We felt like we could fall in love with these guys without betraying the ones we already loved.

The Best Of Both Worlds I & II: The Borg are ready for an all out attack on Earth. Now they’ve captured Captain Picard and use his knowledge of Starfleet defenses and strategies. Locutis, the Picard-Borg, leads the cyborg fleet in an epic space battle, perhaps the most ambitious on a Trek television episode. We all know Picard gets rescued and the Federation wins the day, but at what cost? Picard would be permanently scarred by his encounter with the Borg.

Chain Of Command: This two-part episode provides Patrick Stewart with some of his best work on the series. Picard is relieved of his command so that he can train and carry out a secret mission for Starfleet in Cardassian space. It’s a trap, and he’s captured by a ruthless Cardassian, played wonderfully by David Warner. He’s tortured both physically and mentally. Meanwhile, Ronny Cox guest stars as the intermediate captain of the ship. He isn’t a fan of Riker’s and runs a tighter ship than Picard did. Some of the show’s best acting performances can be found here.

Star Trek: Generations: Retired Captain James T. Kirk is aboard the Enterprise B as an honored guest for her “trip around the block” when a distress call diverts the unequipped ship to a hazardous rescue operation. Kirk is apparently killed in the ship’s encounter with a strange “space ribbon”. 78 years later the Enterprise D encounters a survivor of the ribbon who is intent upon returning even at the cost of millions of lives.

Generations was the first Trek film to forego the production number. If you’re following along at home, this would be Star Trek VII. Most fans would agree that the next film in the series would be the best to feature the Next Generation cast; this was still a fun film to watch. Data’s emotion chip did get way out of hand. I remember being concerned at the time that this was going to be carried over. Lucky for the fans, it was quickly abandoned.

The film might have been better served by taking more time to create a better film version of the Enterprise D. It’s obvious that the ship’s destruction was written into this film to allow for the necessary redesign of the Enterprise for future films. A greater participation by the rest of the original cast, while costly, would have gone further to portray the changing of the Star Trek guard. I have heard Nimoy speak several times on the issue. He declined the role not because of money as many speculate, but because Spock’s role was too insignificant and out of character. How I would have loved to see Picard, Data, Spock, and Kirk work together toward the film’s climax. Still, Generations did bridge the two generations of Star Trek in an emotional if unsatisfying fashion.

Star Trek: First Contact: When the Borg retreat into Earth’s past to destroy its future, the Enterprise crew follows. The Borg attempt to stop the famous flight of Zephram Cochrane’s Phoenix. This was fated to attract a Vulcan ship in the area with its experimental warp engines. Without this important First Contact there would be no Federation. Earth would be helpless against the Borg’s attempts at assimilation.

Star Trek: First Contact is light-years ahead of any other Next Generation film. There is virtually every characteristic that makes good Star Trek present here. James Cromwell as Cochrane provides the best comedy relief on Star Trek since the tribbles. The Borg infiltration reminds us of the first Alien film with its shadows and cramped airshaft scenes. The action is ramped up several notches from previous films. The basic crew seems to have found its feature legs and is more comfortable as a unit.

Purists will find some fault with the continuity errors the film brings to the Trek universe, but after four years of Enterprise, these errors are quite minor. Jonathan Frakes is not, in my opinion, one of the brightest actors in Trek’s world, but here he does show he has the chops to be a first class director. Like Nimoy before him, it took one of the show’s main actors to breathe emotion into the franchise. The atmosphere in the cinematography is the best of any Trek before or since. This is probably technically the finest Trek film.

Star Trek: Insurrection: Data (Spiner) appears to be out of control (again). He leads a Federation observation team through a pristine and seemingly primitive planet, causing havoc along the way. When Data reveals a Federation duck blind and takes captives, the Enterprise is called in to capture him. Picard (Stewart) and crew soon discover a Federation black ops plan to relocate a planet’s inhabitants so they can exploit the healing properties of the planet’s atmosphere.

I will be honest and admit that Insurrection is one of my least favorite Trek films. I rank it down there with the first film due to its many flaws. While it has always been Star Trek’s style to engage in open social commentary, I don’t believe it usually needs to hit you over the head so blatantly. The social message here is too cut and dried. There is not the necessary moral middle ground to create honest conflict. This is also Brent Spiner’s worst performance. The inside jokes are too cute and forced to appeal to any but the most dedicated fans, and I believe even they might feel insulted. The Picard/Data duet while two shuttles engage in a dogfight is just too much for my gag reflex to handle. Jonathan Frakes, after turning in such an impressive directorial display on First Contact, plays it safe for the entire film. I’ve heard fellow Trek fans say this would have been a better series episode. I disagree. This would have been a poor episode as well. Rick Berman puts one more bullet in the gun that killed Star Trek.

Star Trek: Nemesis: Following the wedding of Riker (Frakes) and Troi (Sirtis), Picard (Stewart) and his crew encounter a positronic signal that could only come from another android. What they find is a carbon copy of Data (Spiner). Immediately summoned by Starfleet to meet the new Praetor of The Romulan Empire, Shinzon (Hardy), Picard is faced with a mirror image of his own youth and a plot for revenge that could mean the destruction of Earth itself.

If ever there was a film that was badly misunderstood it is Star Trek: Nemesis. The most common complaint I’ve heard is it was too much like an episode. Excuse me, but isn’t it supposed to be? Nemesis has everything a good Star Trek film should have. The character chemistry, space battle, a morality tale, and terrific f/x. If the film suffers at all it is from poor editing, as the collection of deleted scenes clearly shows (more on that in the special features section). As many politicians are fond of saying, “mistakes were made,” but this is a far better film than the critics or fans have given it credit for being. It deserves a second look, and this two-disc release is the perfect opportunity to revisit Star Trek: Nemesis.

One of the assets of this once-new incarnation of Star Trek was the captain himself. Both actor and character brought a strong presence to the franchise. Patrick Stewart brought a stage method to this television show, and he was likely one of the franchise’s best thespians. He’s getting ready to return to the franchise with a new streaming series at CBS All Access. That might have a lot to do with why CBS is bringing us this Picard Movie & TV Collection on Blu-ray. You get six discs of Next Generation high points. Many of the extras from the previous releases are included, but not really anything new. If you want to get ready for the new show and are looking for a little Trek to get you in the mood, this one is out there. All you have to do to have it in your collection is to “make it so”.

Gino Sassani is a member of the Southeastern Film Critic's Association (SEFCA). He is a film and television critic based in Tampa, Florida. He's also the Senior Editor here at Upcomingdiscs. Gino started reviewing films in the early 1990's as a segment of his local television show Focus. He's an award-winning recording artist for Omega Records. Gino is currently working on his 8th album Merchants & Mercenaries. Gino took over Upcomingdiscs Dec 1, 2008. He works out of a home theater he calls The Reel World. Favorite films: The Godfather, The Godfather Part II, The Body Snatcher (Val Lewton film with Karloff and Lugosi, not the pod people film), Unforgiven, Gladiator, The Lion King, Jaws, Son Of Frankenstein, The Good, The Bad And The Ugly, and Monsters, Inc.
Contest: Win Satanic Panic On DVD From RLJE Films “31 Nights Of Terror” Crawl (Blu-ray)