Posted in: The Reel World by Jeremy Butler on October 20th, 2019 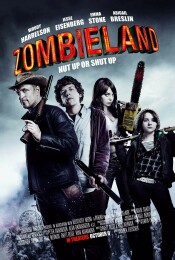 Here comes the second addition to this sequel weekend, as well as another welcome addition to the 31 Nights of Terror. Welcome back, ladies and gentlemen, to Zombieland, and it’s like we never left. True, ten years have passed since we last saw Tallahassee, Columbus, Wichita, and Little Rock, and I was beginning to believe that the likelihood of a sequel was low given the rising profiles of each of the actors involved, but I can happily say that it is here, and it was worth the wait. When last we saw this makeshift family, they were leaving Pacific Playland amusement park after annihilating a zombie horde; romance was brewing between Columbus and Wichita, and Tallahassee finally got their hands on his beloved Twinkie. Had this been the last time we saw the group, I would have been content, but the unwritten law of Hollywood is to never let go of a profitable franchise. Now, this unwritten law can be both good and bad, as it could result in a film that is on par or better than its predecessor, or the result could be a product of the law of diminishing returns. Lucky for us, Zombieland: Double Tap is the former instead of the latter.

Double Tap picks up ten years after the events of the first film. The merry band is still together and has taken up residence in the White House of all places. Keeping their distances from other survivors, they have fallen into familiar patterns. This appears to sit well with everyone but Little Rock, who has now become a teenager and seeks a connection with people of her own age. Around the same time, Wichita begins to feel pressure in her relationship with Columbus, leading to the sister deciding to go off on their own. Both Tallahassee and Columbus are devasted by the lost of the two and handle it in their own fashion: Columbus pines, while Tallahassee provides no real comfort, deciding that it may be time to hit the road himself. It then they come across a distraction in the form of Madison (Zoey Deutch), a gorgeous albeit ditzy young woman who proves it does not take brains to survive the zombie apocalypse. She quickly annoys Tallahassee, but you can guess who is looking for a rebound.

Speaking of Wichita and Little Rock, not long after taking off on their own, once again with Tallahassee’s ride (great homage to the original film), they discover a hippie pacifist named Berkeley (Avan Jorgia), who Little Rock is instantly smitten with, resulting in her taking off with him sans Wichita, giving her a taste of her own medicine. Fearing for her sister’s safety, she returns to White House to enlist the help of Tallahassee and Columbus, thus discovering Madison. Despite initial awkwardness, the group ventures off another adventure to save Little Rock, from her hormones mostly. Meanwhile a new breed of zombie is emerging; it’s faster, stronger, and harder kill.

So, the big question is does the sequel live up to the original, and the answer is very much so. This came as a bit of surprise to me, as I expected that the lengthy time period would diminish the film, but that wasn’t the case. All the elements that were beloved in the first film, such as the rules, are still on display, along with the addition of Commandments (which ironically are relatively the same). Additionally, I expected there to be some rust in regards to the actors resuming their characters, but they still fit their roles like a glove, including Abigail Breslin, who has gone from a little girl to a young woman. Her movie arc is what I would have expected for her character. Given her youth in comparison to the rest of cast, her rebellion is the catalyst that propels the story forward. The dynamic between Eisenberg and Stone, which was a key component to the success of the original film, has also gotten better with time. They both have done some growing up, especially Eisenberg’s character, who is no longer merely Stone’s character’s loyal dog. He asserts himself in the relationship and stands as her equal. Well, sort of. It is still very clear who wears the pants in the relationship. Now on to the favorite character, Tallahassee, who not only manages to get his recognition for Zombie Kill of the Century, but also gets his own love interest in the form of Rosario Dawson’s Nevada.

The addition of the new breed zombie keeps things from becoming stale as well as presents a new challenge for this group that has raised zombie killing to an art form. I never imagined how creative zombie killing could get, but thankfully the film educates the audience on just that via Eisenberg’s signature narration throughout the film.

Though it faces stiff competition from Disney to become the weekend box office winner, I can say with certainty that fans of the original film will not be disappointed with this sequel. I would encourage watching the original before seeing the sequel merely to refamiliarize yourself with all the great themes to see how they were carried over to the new film. Be on the look out for reference to 2009, when the first film was released.

Jeremy Butler is a film school graduate of the International Academy of Design and Technology. He is been writing for Upcomingdiscs since 2012; however, movies have played a big part of his life for much longer. Favorite genres include horror, science fiction/fantasy, and comedy. Favorite movies are V for Vendetta, Boondocks Saints, Kiss Kiss Bang Bang, and The Godfather.
“31 Nights Of Terror” Maleficent: Mistress of Evil “31 Nights Of Terror” Tribute To Boris Karloff: Man Created A Man