“31 Nights Of Terror” The Lighthouse

Posted in: The Reel World by Brent Lorentson on October 25th, 2019 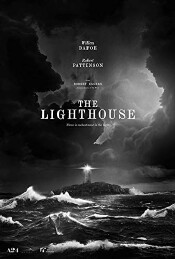 When it comes to writer/director Robert Eggers, despite only directing The Witch, he’s currently one of the most divisive directors working today. Personally I loved The Witch and feel it’s one of the best horror films in the past decade, while others openly loathe the film and consider it a snooze-fest. Eggers has a style that really isn’t for everyone, but for those who are fans (myself included), he’s a breath of fresh air to the horror genre, though his style is very much a throwback to the times before computer graphics and his films rely heavily on atmosphere, where his stories take time to develop as he wants us to be like a fly on the wall as we watch his characters fall apart.  The Lighthouse is very much a claustrophobic character piece that will once again divide audiences, but one thing I believe we can all agree on: the performances of Willem Dafoe and Robert Pattinson are phenomenal and deserve all the recognition that will be coming their way.

When we meet Thomas (Dafoe) and Ephraim (Pattinson), they are being taken out to the lonely island where they will be serving their time tending to the lighthouse until their replacements arrive.  The beautiful black and white cinematography sets the tone for this film and gives it a timeless feel. This is one of the factors that makes this film work, because it could easily take place in the late 1800’s or even today (though obviously there would be better equipment if it were more modern). Thomas makes it clear right from the start he is the only one who will be tending to the light, while Ephraim is expected to tend to the rest of the duties. For a good portion of the film, we are with the men as they go about their grueling day-to-day routine, and we get to see the resentment grow in Ephraim towards Thomas.  Sure, there is the push and shove of masculinity as we see Thomas overtly trying to maintain his dominance while we’re seeing Ephraim slowly break down, and it’s in this where we see the film shift as it exploits Ephraim’s mental decline.

The Lighthouse is very much a tale steeped in folklore, and a lot of it hinges on the belief of what can happen if a man harms a sea bird.  Thomas repeatedly warns Ephraim of the consequences, but we’ve seen what the man has gone through, and this bird is pretty much taunting him, daring him to kill it…and when Ephraim snaps, it goes from justified to…well, let’s just say it’s a pretty intense moment.  It’s in this act of intense violence where the film shifts its pace and the intensity ramps up.  What also ramps up is the amount of alcohol we see consumed by these two men. If this film were to be a drinking game where you take a shot every time a character drinks, it’s safe to say you’ll be passed out, if not dead, before the credits even roll.  When the alcohol runs out, the men starting resorting to drinking other things and could very well be responsible for the events that take place in the final act.  Factor in the mermaids and possible other creatures, and, well, this film throws a lot at you where it allows the audience to decide what is real and what is madness.

This film isn’t for everyone, and it is very much a slow burn filled with two great performances.  If you’re a fan of Milton or tales of old sea dogs, this film will be right up your alley, but for the casual filmgoers, this one may test their patience.  Eggers has a unique eye, and I appreciate that he takes chances with his films. He is a sobering reminder of how film can be art and not simply VFX $200 million tent pole films to sell merchandise.  The Lighthouse is definitely a film that will be on the curriculum for future filmmakers to study and dissect while creating a discussion.  While I enjoyed The Witch more, I can appreciate what this film offers. Robert Eggers is the real deal, and as his films continue to grow in scope, I feel his best is yet to come, and that is something to be excited about.

Brent Lorentson is a horror writer and film critic based out of Tampa, Florida. With a BA in Digital Film, he co-wrote and co-directed Scavenger Hunt. His short stories have appeared in various horror anthologies. In 2019 his short script Fertile Blood will be a part of the anthology horror film Slumber Party. He is currently working on his first novel A Dark and Secret Place set to be released in late 2019. Favorite Films: Taxi Driver, Fight Club, I Saw the Devil, The Wild Bunch, Dawn of the Dead, A Clockwork Orange, Pulp Fiction, Heathers, The Monster Squad, and High Fidelity.
007: The Daniel Craig Collection (UHD Blu-ray) (4K) Wonder Woman: Bloodlines (UHD Blu-ray) (4K)