Posted in: Disc Reviews by Jeremy Butler on October 25th, 2019 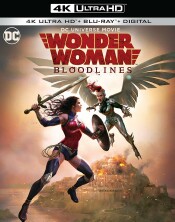 “I was really hoping the whole “maze” thing was just a metaphor.”

Following Superman’s most recent run of animated movies, the DC Animated Universe (DCAU) is turning to Wonder Woman for its next installment, which acts as an origin story for the Amazon princess. In Bloodlines, Princess Diana (Rosario Dawson) leaves Themyscira to become a guardian of peace in what is coequally called man’s world. Joined by Air Force Captain Steve Trevor (Jeffrey Donovan of Burn Notice fame), Diana faces enemies both superhuman as well as mythical in this welcomed addition to the DCAU. In my humble opinion, the animated realm is the main place that DC is having success over Marvel, as they maintain a steady stream of content. This is not a jab against the original series dominating the CW network, which are also good (some better than others. Arrow < The Flash). Though it does take a second to pick up in the beginning, once it does, Wonder Woman: Bloodlines delivers an engaging and action-packed story, which will undoubtedly help further DC animated universe.

Air Force Captain Steve Trevor finds himself under attack by alien forces that kill his fellow pilot. While attempting to evade the creatures, Trevor breaches the barrier of the Amazon paradise, Themyscira. The trip through the barrier saved him from the alien threat, but his ship is damaged and plummets into the ocean. Rescue by Diana, who witnessed the entire thing, Steve is captivated by the Amazon princess. Not only is he captivated, he is also captured, as in held captured by the Amazons, due to the law that stipulates that no man may enter Themyscira. Desperate to return to his world, he appeals to Diana, who sees his arrival as a sign in a prophecy that speaks of a time when the Amazons will return to man’s world. Disobeying her mother’s orders, Diana frees Captain Trevor and is subsequently banished from Themyscira.

Now that we have cleared out the back story, let’s discuss what the film is truly about, which is the relationship between Diana and her surrogate sister, Vanessa. Upon leaving her home, Diana is taken in by a scholar and her daughter. Showing obvious favoritism to Diana leads Vanessa to follow a dark path, leading the mother to request Diana’s help in saving her daughter. Though Vanessa was not an especially sympathetic character, I did feel slightly bad for her, as it was very clear to everyone, including Diana, the mother’s neglect. Diana, though a formidable hero, comes off as naïve, wanting to believe in the good in her surrogate sister, despite her crossing the line that most heroes refuse to cross. This is an endearing quality, but it also reads as gullibility. Though this trait can be annoying at times, it is also reminiscent of the film adaptation, as that incarnation of the Amazon princess was also very naïve as to the way the world worked.

Diana faces a rogue’s gallery of villains to include Silver Swann (Marie Avgeropoulos, The 100), Giganta (Kimberly Brooks, who also voiced The Cheetah), Dr. Poison (Courtenay Taylor), The Cheetah, and Dr. Cyber (Mozhan Marno, The Blacklist) and a couple more who won’t be named, as to not spoil the surprise. The most surprising villain is revealed at the film’s conclusion, setting up a potential follow-up movie. This reveal, however, did not come as a surprise to me, as I found this character to be shady from the moment she came on screen. The cast was great, but the person I was most impressed by would be Donovan. Granted, the rest of the cast put forth the same commitment as he did, but his voice just seemed to fit the character. His voice is synonymous with Steve Trevor for me now. Perhaps it is because I was such a Burn Notice fan.

Wonder Woman: Bloodlines is presented in its original aspect ratio of 1.78:1. The ultra-high-definition 2160p  image is arrived at by an HEVC codec with an impressive average bitrate of 65-70 mbps. The ultra-high-definition image presentation is pretty much spot-on. This film uses more traditional style animation. There aren’t so many of the odd style choices that have appeared in the last couple DCAU films. Colors are bright and vivid. There isn’t anything murky or dark this time around. The image is clean. I wish more of them looked like this.

The DTS-HD MA 5.1 pretty much does what it needs to do without a lot of flair. There aren’t a lot of aggressive surrounds, but I was impressed by the fullness of the audio. The subs are a huge part of that. They work not to overpower or shake your room but to give weight to the animated action. It also helps to deliver the kind of heroic, deep voices that many of these animated efforts lack. It’s all perfectly balanced and amps up the entertainment value considerably.

The Cheetah: Ferocious Archenemy (10:50): An in-depth featurette regarding the evolution of one of Wonder Woman’s most ferocious archenemies. Intercut with input from Ames Kirshen, Vice President of Interactive and Animation at DC Entertainment, DC Daily host Amy Dallen, and Rosario Dawson.

A Sneak Peak at DC Universe’s Next Animated Movie, Superman: Red Son (11:21): An Elseword story that depicts how the Superman would have played out if the Last Son of Krypton landed in Russia instead of Kansas. I am looking forward to this story.

Wonder Woman: Bloodlines brings the female member of DC’s Holy Trinity back to the forefront, where she belongs. As previously mentioned, the film remains open-ended, pretty much guaranteeing another film in her honor. All I can say to that is keep them coming.

Jeremy Butler is a film school graduate of the International Academy of Design and Technology. He is been writing for Upcomingdiscs since 2012; however, movies have played a big part of his life for much longer. Favorite genres include horror, science fiction/fantasy, and comedy. Favorite movies are V for Vendetta, Boondocks Saints, Kiss Kiss Bang Bang, and The Godfather.
“31 Nights Of Terror” The Lighthouse “31 Nights Of Terror” Contest: Win Abbott & Costello Meet Frankenstein