Posted in: No Huddle by Brent Lorentson on November 1st, 2019 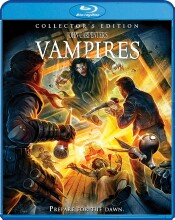 The folks over at Shout have done it again, finding a forgotten title and polishing it up for a nice Blu-ray under their Scream Factory release.  This time they have pulled out the 1998 western/horror mash-up that is John Carpenter’s Vampires.  It only seems fitting that a John Carpenter film gets covered for the 31 Nights of Terror, though this is definitely a title not many would expect to hear about.  When I say this film wouldn’t even crack my top five Carpenter films, it may at first seem like a jab, but you’ve got to remember John Carpenter has one of the most impressive bodies of work, not just for a horror director, but for a director, period.  Big Trouble in Little China, The Fog, The Thing,  They Live, The Assault on Precinct 13, In The Mouth of Madness, oh, and then there was that little film everyone forgets about, Halloween…and seriously, there are numerous other films I didn’t even mention.  I love the filmography Carpenter has given us, but I’m still hoping he’ll release at least one more classic before he hangs up his directing duties for good.

When John Carpenter’s Vampires first came out, I think it would be fair to say that for many he was past his prime, and some may have uttered the phrase “hack”.  Personally I never felt that way, especially when only a few years before he had released In the Mouth of Madness, which is one of my favorite horror films from the 90’s  “Do you read Sutter Kane?” is a phrase that haunted me for a while.  So going into his attempt at a vampire film with James Woods starring — this was something I was excited about.  I got to admit, 18 year old me wasn’t impressed.  This seemed like something I’d love considering I was a huge fan of Near Dark and From Dusk Till Dawn was still fresh on VHS.

My biggest complaint is, why wasn’t Kurt Russell cast for this?  This just seems like a film Russell would have thrived in, and with the track record between Carpenter and Russell, this should have been a slam-dunk success.  I like James Woods, and I think he does a good job with this, but he doesn’t have the pull to carry a movie like this on his own.  Before some people lose their minds over me saying that, sure, he was amazing in Videodrome and Salvador, but his character Jack Crow needed that extra charisma that Kurt Russell can just naturally bring to a role.  Slide Woods into Daniel Baldwin’s role, and suddenly I feel this film would have been elevated to something else. But no sense getting worked up over fantasy casting two decades after the fact.

The story is fairly simple: Jack Crow (Woods) leads a group of vampire slayers on the trail of a master vampire. Just after his team wipes out a nest of vampires, the master vampire wipes out most of the team and the prostitutes they are celebrating with.  The first act of this film is pretty awesome. It’s violent and bloody and with a splash of beautiful half-naked women, this is was a vampire movie should be.  Seeing the master vampire, Valek (Thomas Ian Griffith) literally rip everyone apart is an awesome gory sight to behold and shows us how vicious these vampires are.  Sadly, the rest of the film just can’t maintain this badass gory momentum.

For Jack, with the aid of his sidekick, Anthony Montoya (Daniel Baldwin) and a vampire-bitten prostitute, Katrina (Sheryl Lee) the plan is to hunt Valek down once and for all. They eventually find out that Valek is the first vampire and that he was created by the Catholic church, but Valek isn’t just killing people and drinking blood, he’s got a plan, too.  Like we’ve seen before in numerous vampire films, shows, books…this master vampire wants to walk in the sunlight and be the ultimate bad guy.  I’m fine with this kind of rehashed idea, but where the film falls apart is that as the film progresses, the vampires manage to get easier to kill.  From the start of the film we see how it takes a team of several trained slayers, heavily armed, to take out a nest they are ambushing.  I mean, they make this look hard and dangerous…but when Jack finds the new nest (basically a small village that has been turned), he and his new crew, though Katrina doesn’t count, but they added an untrained priest…somehow they seem to hold their own.  I won’t get started on how earlier Valek is flying and able to chase them down, but we never see the super strength or powers again.  Then there is the strange yet obligatory romance that develops between Anthony and Katrina. I’m not sure how much of this would be included in films released today, considering how the guys beat on her and she’s somewhat taken advantage of considering she’s been vampire-roofied.  Really, as I was watching this, I was surprised how useless her role was beyond being a “hot” body to look at.

Really when the film comes to an end, it feels so abrupt that I was still expecting more as the credits rolled.  It sets itself up nicely for a sequel that never came to be, but I can say I’m not all that disappointed we never got to see it.  Catching up with the film all these years later, I can say I enjoyed it more, but it’s definitely not what I’d consider as Carpenter on his A-game.  What I will say is that even a weak John Carpenter film is still better than a lot of films that are released out there.

The release comes with some new interviews with John Carpenter and several members of the cast.  One of the best features is a commentary with John Carpenter himself. This guy is really fun to listen to and is filled with information,  This also has some vintage (really, is 1998 vintage now?) behind-the-scenes featurettes and interviews from the set.  While this may not be the best Blu-ray Scream Factory has put out, it is still pretty good, considering these guys typically put out some of the best collectors editions for horror lovers.

Brent Lorentson is a horror writer and film critic based out of Tampa, Florida. With a BA in Digital Film, he co-wrote and co-directed Scavenger Hunt. His short stories have appeared in various horror anthologies. In 2019 his short script Fertile Blood will be a part of the anthology horror film Slumber Party. He is currently working on his first novel A Dark and Secret Place set to be released in late 2019. Favorite Films: Taxi Driver, Fight Club, I Saw the Devil, The Wild Bunch, Dawn of the Dead, A Clockwork Orange, Pulp Fiction, Heathers, The Monster Squad, and High Fidelity.
Ultraman: The Complete Series – SteelBook Edition It’s a Wonderful Life (UHD Blu-ray) (4K)