Posted in: Disc Reviews by Gino Sassani on November 1st, 2019 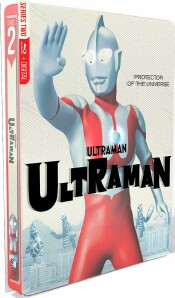 Ultraman is a huge part of Japanese culture and pretty much has been since the original live-action show in 1966. Perhaps Godzilla started the ball rolling, but Ultraman brought us these monsters on a regular basis. In Japan, Ultraman is like our Superman. He’s an iconic hero and a huge part of the pop culture. Since the 60’s he has appeared in many forms, most of them animated. But it is this 1966 series that made a ton of us kids fall in love with him and an entire genre. Yes, there were many from the era: Space Giants featured a giant fighting robot who fought monsters and sometimes converted into a spaceship (yes, before transformers were ever thought of); Johnny Socko had his giant robot; and the list goes on. But it was Ultraman who started it. Eiji Tsuburaya, who created the original Godzilla, formed a new company outside of Toho Pictures. Ultraman was pretty much the first thing out of the new shop.

It started with a series called Ultra Q. It was a popular series in Japan. There was no Ultraman here, but some of the elements of what would be the Science Patrol started there. When it was finished, the staff was approached to create a new show, and fast. But this one needed more action and also something that could be sold to the American markets. That was Ultraman.

Ultraman was a space being who was chasing an escaped monster. When his spacecraft collided with that of Science Patrol Officer Hayata, he inadvertently killed the young man. To make up for his mistake and also offer Earth a way to fight the endless row of monsters unleashed, he merged his life with Hayata. Now, whenever a monster threatens, Hayata uses his “beta capsule” and morphs into Ultraman. Complete with martial arts moves and an array of ray weapons, Ultraman fights these creatures in hand to hand combat. The downside is that Ultraman’s solar energy diminishes rapidly in Earth’s atmosphere. As he weakens, a light on his chest flashes. A narrator reminds us each time that if it stops, Ultraman will die.

Mill Creek has brought the entire series in one release. All 39 episodes can be found on six discs. The set has a nice steelbook case. There is a full-color booklet with a synopsis of every episode, a monster gallery, and a short history of the series. Unfortunately, the English language track is not found here. You’ll have to settle for subtitles. Still, it’s a handsome collection that I was very pleased to add to my own collection. Yeah, the show hasn’t exactly aged well. But the memories have. You just can’t beat this for a pretty cool bit of nostalgia. “We love you, Ultraman”.

Gino Sassani is a member of the Southeastern Film Critic's Association (SEFCA). He is a film and television critic based in Tampa, Florida. He's also the Senior Editor here at Upcomingdiscs. Gino started reviewing films in the early 1990's as a segment of his local television show Focus. He's an award-winning recording artist for Omega Records. Gino is currently working on his 8th album Merchants & Mercenaries. Gino took over Upcomingdiscs Dec 1, 2008. He works out of a home theater he calls The Reel World. Favorite films: The Godfather, The Godfather Part II, The Body Snatcher (Val Lewton film with Karloff and Lugosi, not the pod people film), Unforgiven, Gladiator, The Lion King, Jaws, Son Of Frankenstein, The Good, The Bad And The Ugly, and Monsters, Inc.
“31 Nights Of Terror” Night Of The Creeps “31 Nights Of Terror” John Carpenter’s Vampires