Posted in: No Huddle by Jeremy Butler on November 4th, 2019 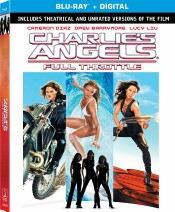 This is a movie that does not hold up with time. Just in time for the release of the reboot comes Charlie’s Angels starring Cameron Diaz, Drew Barrymore, and Lucy Liu. I remember being quite enamored with this movie, or maybe it was Drew Barrymore I was enamored with. It would explain why I watched Santa Clarita Diet. Anyhow, this is the 2003 sequel to the 2000 film adaptation starring the lovely woman mentioned above. This film is joined by Bernie Mac replacing Bill Murray as Bosley, and Demi Moore as the film’s big bad. After rescuing captured US Marshal I’m Mongolia, Natalie (Cameron Diaz), Dylan (Drew Barrymore), and Alex (Lucy Liu) are recruited by Charlie to recover titanium rings that have been stolen from the Justice Department. These rings contain the names of people in the Witness Protection Program. While thwarting the assassin of a witness, the mission gets personal when Natalie and Alex discover that their partner, Dylan, is actually a protected witness.

Dylan is forced to confront her past as well as her old flame, who is also after the list. Further complicating matters, the Angels must confront a big bad who has an intimate knowledge of who they are and how they operate.

As I said, watching the film now, it does not hold up; things that were sexy and funny back then do not translate to the 2019 me. Taking it for how it is, it still provokes childhood nostalgia in the form of my crush on Drew Barrymore, but story-wise not extraordinarily interesting. The storyline involving Dylan is of some interest because it provides depth to arguably the franchise’s main character. I did enjoy the addition of Bernie Mac. Given the PG-13 rating, he isn’t as unfiltered as I’m used to. Still, even filtered, Bernie Mac puts on a show.

Demi Moore fits well into the cast despite the obvious contrast between her and the latest incarnation of the Angels. I had no trouble buying her as a former Angel; however, as a villain, she is lacking. She had some good traction during her conversation with Charlie, but all that went away when she held her gold-plated Desert Eagle sideways to shoot the speaker. Even I couldn’t stop myself from rolling my eyes.

Luke Wilson and Matt LeBlanc return as Cameron Diaz’s and Lucy Liu’s boyfriends, respectively. The film also features the addition of a pre-Transformers Shia LaBeouf , Justin Theroux, along with the return of Crispin Glover as the creepy Thin Man from the first film. Another notable thing about the movie are the cameos, including Jaclyn Smith from the original series, Bruce Willis, Eve, Robert Patrick, and Pink. Theroux was an interesting character. His intro caught Dylan, as well as me, off guard. This was my first introduction to Theroux as an actor, and it left a lasting impression with me for years to come.

I think the hardest thing for me to come to grips with is the overuse of the wire work. Ironically, I can recall my 2003 self thinking all the flips were so cool. As I rewatched the film in 2019, all I could think was this was this is so unrealistic. What a difference 16 years makes. In efforts to sensationalize the fight sequences, they end up substituting actual fighting ability in favor of slow-motion sequences.

Charlie’s Angels: Full Throttle is good for childhood nostalgia, but does not stand the test of time. A good experiment would be rewatch this one and the 2000 adaptation and compare it to the one being released on November 15th. That’s my plan.

Jeremy Butler is a film school graduate of the International Academy of Design and Technology. He is been writing for Upcomingdiscs since 2012; however, movies have played a big part of his life for much longer. Favorite genres include horror, science fiction/fantasy, and comedy. Favorite movies are V for Vendetta, Boondocks Saints, Kiss Kiss Bang Bang, and The Godfather.
Veronica Mars (2019): Season 1 Terminator Dark Fate