Posted in: The Reel World by Gino Sassani on November 4th, 2019 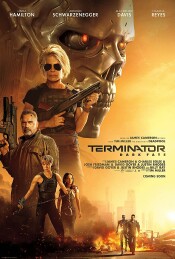 “There’s just more to it than picking the right color. It’s the texture, the weight of the material. One wrong choice, it can destroy the look of the entire room.”

Film rights can be a tricky and complicated issue. Sometimes these rights aren’t quite clear and lead to popular titles never making it to the home video market, or at least suffering long delays as in the 1960’s Batman television series situation. Often rights are held for certain periods of time and end up moving from holder to holder. That’s been the case with the Terminator franchise. The result has been some sequels that pulled in different directions and failed to provide a nice linear history from film to film. Now those rights have reverted back to a favorable situation for the likes of James Cameron. The result is an attempt to get back to the original course of the first two films. Terminator: Dark Fate picks up from T2 and ignores any of the other films made since then. It’s very much like the path taken by the new trilogy of Halloween films we got a taste of last year. There isn’t any denying the fact that T2 was the best this franchise has had to offer. Something was always just a little bit off with the rest of the films. There’s a texture to all of this that James Cameron has a unique eye for. And while he didn’t direct this film, he created the story and produced the film. Like the new Halloween direction, this is also intended to be the first film in a new trilogy. The Terminator franchise appears to be back, and on track to please the legions of fans from the old to the new.

Sarah Conner (Hamilton) has saved the future. Her efforts have stopped the arrival of Judgment Day, and the future appears safe. We learn that she did end up losing John to the Terminator (Schwarzenegger), and she continues to travel the globe to stop more threats as they arrive from the future. She has been getting warnings when something is sent from the future by an unknown source who always signs his tips: “For John”. When she follows a lead to a new intrusion, she discovers that history is about to repeat itself. A new kind of Terminator called a Rev (Luna) has come for a new target. Her name is Dani Ramos (Boneta). Sarah attempts to help her as they discover exactly why a new future wants her dead in the present day. Skynet never happens, but a new AI weapon called Legion creates pretty much the same humans-versus-machines future that Skynet once threatened. Dani is the key to stopping it, and this resistance, like the original resistance, sent someone back to try to protect Dani from the Rev. That someone is a human/machine hybrid named Grace (Davis), and she’s determined to protect her charge. In order to have a chance, they track down the mysterious tipster and find a man named Carl, who lives in a secluded home with a wife and child. It seems like a perfect life, except Carl is the aged Terminator who killed John. Sarah will have to figure out a way to work with him in order to protect the new savior.

In many ways this is less of a sequel to T2 and more of a natural reset of the franchise. It’s a pretty sound idea. It was getting tedious for film after film to keep trying to protect John Conner. I mean, at what point does the future finally resolve? Also, we have long passed in real time that 1990’s Judgment Day, so something had to give. The result is quite a natural plan. It’s a pretty good assumption that once a genie is out of the bottle, stopping one certain disaster only leads to another somewhere down the line. Creating a new future takes us away from what have actually become tired images of the Skynet future. Enough already, right? So now we have Legion, and it’s like a new version of a favorite song. The instruments might change or shift, but those familiar notes still reach out to us. That’s the feel that was accomplished here. It still has the complete feeling of a Terminator film, but the arrangement has changed, so there’s still something new to be found. It also works well as an entrance point for new fans. Believe it or not, you don’t really have to have seen the first two films to appreciate this one. You get caught up fine with the exposition, and you can watch this film and be completely caught up.

Certainly one of the film’s finer elements is the return of Linda Hamilton. Too many years have passed, and it’s quite a bit sad to see how the years have left their mark on the actress. Fortunately, she still has the chops and manages to keep up with the younger cast that is obviously intended to carry the torch forward. I’m so glad she’s back, and it strikes just the right emotional chord to satisfy the old audience while the new one starts their own journey. Arnold can still carry the weight of the machine. You’ve got to give him a lot of credit. Carl is very much the killer machine he always was, but this is a T-800 who has had a human connection and has learned very much how to be human. It might actually be Arnold’s best performance in the franchise. There’s also Grace, played by Mackenzie Davis. We end up with three kick-butt women here, and it’s a formidable combination. She does a fine job of bridging the machine and human worlds in much the same way I think they were trying to do in the last film. Here it actually works. She is also the connection with those scenes played out in the future. We see the new apocalyptic world through her eyes.

The new Rev Terminator is a bit of a disappointment. He is basically the Robert Patrick idea of a shifting substance that allows for face shape-shifting, and, of course, the formation of a lot of pointy weapons. The problem is that we’ve seen this already. Yeah, it’s black instead of silver and is stringy instead of liquid-like. But that just makes it look way too much like Venom from the Spider-verse. There are some incredible visuals in the film and a ton of action that keeps you on the edge of your seat, but the new Rev guy just doesn’t sell it for me. He’s the film’s weak link. A better villain with a fresher look or take could have taken a very good film and made it a great film. There’s more to come, and I’m very interested in where it’s all going. Natalia Reyes is a good hero, and she’s certainly strong enough to carry the franchise forward. She’s a fresh new face that can deliver both the action and the heartfelt moments. I liked her and look forward to her next outing. When these guys hit the screen again you can be sure that “I’ll be back.”

Gino Sassani is a member of the Southeastern Film Critic's Association (SEFCA). He is a film and television critic based in Tampa, Florida. He's also the Senior Editor here at Upcomingdiscs. Gino started reviewing films in the early 1990's as a segment of his local television show Focus. He's an award-winning recording artist for Omega Records. Gino is currently working on his 8th album Merchants & Mercenaries. Gino took over Upcomingdiscs Dec 1, 2008. He works out of a home theater he calls The Reel World. Favorite films: The Godfather, The Godfather Part II, The Body Snatcher (Val Lewton film with Karloff and Lugosi, not the pod people film), Unforgiven, Gladiator, The Lion King, Jaws, Son Of Frankenstein, The Good, The Bad And The Ugly, and Monsters, Inc.
Charlie’s Angels: Full Throttle Motherless Brooklyn