Posted in: The Reel World by Gino Sassani on November 11th, 2019 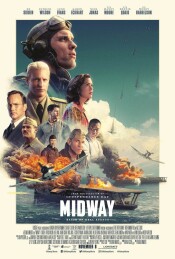 Director Roland Emmerich is no stranger to big-screen battles. The difference is that up until this year those battles have been against aliens, huge climactic changes, or giant lizards named Godzilla. There’s no question that he understands how to shoot epic confrontation. The question I had going in to Midway was, can he deliver a battle that wasn’t fiction? After nearly tow and a half hours, the answer came back somewhat mixed. This isn’t the first time that the Battle of Midway has been brought to the big screen. In the 1970’s Charlton Heston gave us a film that was more renowned for the trendy Sensurround gimmick than it was for the drama that unfolded on the screen. Sensurround was a fancy name for huge subs that would shake the theater, and if you were lucky enough to be seeing the film at a theater with enough money to go all the way, you might have found yourself in a seat that was wired to shake, rattle, and roll. Today the chains call that Dolby. This Midway didn’t lend itself to some William Castle hustle. It’s all up on the screen. The film bears no relation to that earlier effort except for the legendary battle in the Pacific that turned the tide of the Pacific theater of World War II toward the Allies. The film actually shares more in common with the classic Tora Tora Tora in that we spend a good deal of screen time with the Japanese players in the battle. Not at all like the earlier gimmick film, this movie is intended to place you squarely in the middle of the action. If that’s what you came to see, you are certainly in for an immersive experience only without the hot-wired seat.

The film doesn’t start with the titular battle. In fact the term Midway might just as easily describe when that famous event would occur in the film as much as it describes the actual battle itself. The film begins in 1937 a full four years before Pearl Harbor. We get a sneak peek inside the Japanese hierarchy and the seeds of what we already know is to come have been planted. From there the film spends about 30-40 minutes on the actual attack on Pearl Harbor. From there we are treated to the Doolittle raids on Tokyo, which were our direct response to the attack. At this point the focus shifts to the intelligence department of the war where intercepted information is gathered and interpreted. That information is passed along to Charles Nimitz, played incredibly by Woody Harrelson, who has to decide what the enemy is up to and the best use of America’s limited naval resources to counter that action. All of the big shots think the Japanese are planning one kind of attack, but Nimitz trusts the leader of one of the intelligence teams who believes the target is Midway, a collection of small islands important most notably as a fueling station between Japan and Hawaii. That intelligence officer is Ed Layton, played by Patrick Wilson. The film spends perhaps too much time with these two talking about the intelligence. We know it’s Midway. Even if you didn’t do quite so well in history class, it’s the name of the film, for crying out loud. Instead of the quick mention, Nimitz and Layton spend too much time with: “Are you sure?”. “Yes, I’m sure!” “Are you really sure?” “Yes, I’m really sure!” “Are you really, really sure?” and so on.

It just takes too dang long to get to the battle. Yes, both Pearl Harbor and the Doolittle Raid were important milestones in our eventual victory against the Japanese, but there have already been several good films about both. Emmerich should have stayed focused on his battle and limited the distractions. There are some throwaway family scenes that even further damage the pace of the film. I found myself questioning if we were ever going to get to the subject of the film at all. Of course, we do, but we spend far less time there than a film of nearly two and a half hours should have spent.

Emmerich does his best to make up for making us wait so long. He uses some of the time to introduce us to many of the brave pilots, many of whom aren’t returning. There’s absolutely an emotional connection there. But where Emmerich makes up the most for lost time is in the cinematography itself. Certainly, there’s a ton of computer-generated material here, but this is the best that CG has to offer at this point. He takes us up in these planes, and we get a front windshield view of the bombing dives and the anti-aircraft flak that continually hammers away at these planes and pilots. Think of Michael Bay’s famous shot in Pearl Harbor where he follows one of the Japanese bombs all the way down to its target. That’s the kind of stuff you’re going to encounter here, but with 20 years better technology.

There are also some very powerful performances here. Ed Skrein rips up the screen as the lead pilot Dick Best. He’s the immature hotdog who has to grow up fast once the flying is real wartime. He’s the charismatic pilot that inspires the others while he somewhat inspires frustration with his superior soldiers who end up relying on him to become a leader. Dennis Quaid has a small but wonderful part as Admiral Halsey, who perhaps should have had a bath before he put to sea according to Paul McCartney, because he ends up with shingles, and it keeps him out of the fighting leaving the spot open for Harrelson’s Nimitz. It’s a bit of a large cast, but these actors pulled away from the pack early and never looked back.

Roland Emmerich isn’t providing a history lesson here, but sometimes it feels like that’s exactly what he’s trying to do. I was a history teacher myself back in the day. I would have cut this lecture in half and stayed focused on my goal. The film comes out just in time for Veteran’s Day on Monday. “Now those are some real heroes.”

Gino Sassani is a member of the Southeastern Film Critic's Association (SEFCA). He is a film and television critic based in Tampa, Florida. He's also the Senior Editor here at Upcomingdiscs. Gino started reviewing films in the early 1990's as a segment of his local television show Focus. He's an award-winning recording artist for Omega Records. Gino is currently working on his 8th album Merchants & Mercenaries. Gino took over Upcomingdiscs Dec 1, 2008. He works out of a home theater he calls The Reel World. Favorite films: The Godfather, The Godfather Part II, The Body Snatcher (Val Lewton film with Karloff and Lugosi, not the pod people film), Unforgiven, Gladiator, The Lion King, Jaws, Son Of Frankenstein, The Good, The Bad And The Ugly, and Monsters, Inc.
Spirited Away Collector’s Edition (Blu-Ray) Fast & Furious Presents: Hobbs & Shaw (UHD Blu-ray) (4K)