Posted in: Disc Reviews by Jeremy Butler on November 12th, 2019 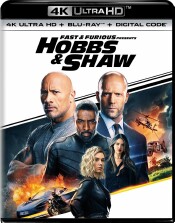 “Luke Hobbs and Deckard Shaw. We have got unfinished business.”

When Dwayne Johnson joined the Fast and Furious franchise, I thought the series couldn’t get any bigger, especially when he and Vin Diesel faced off in one of the best scenes ever in an action movie. Then Jason Statham appeared in the end credits of Fast and the Furious 6 shattering that glass ceiling, and he didn’t disappoint, proving to be one of the group’s biggest adversaries. Then there was the fact that the Statham-Johnson showdown trumped the Diesel-Johnson battle, thereby showing the former’s electric chemistry. It was only a matter of time until a spin-off film came about. Lo and behold, Fast and the Furious presents Hobbs and Shaw. Now, the film has been a source of controversy for the franchise, with both Diesel and Tyrese Gibson voicing their discontent about the delaying of their next installment in favor of this film. Needless to say, Johnson will not be taking part of the ninth installment of the series, but I doubt he is losing much sleep about that, especially when he has the makings of his own franchise with this film.

In the opening credits, we get to meet the third child of the Shaw Family, Hattie, played by Vanessa Kirby, who went from playing royalty in The Queen to a certified harass in the latest Mission Impossible. With this film she solidified her standing as an action star as she holds her own alongside Statham and Johnson. While acquiring a new bio weapon, Hattie’s team is dismantled by a genetically enhanced super soldier (Idris Elba) who seeks to take the weapon. Though she manages to escape with the weapon, Hattie finds herself framed for the killing of the team and theft of the bioweapon.

Respectively, both Hobbs and Shaw are recruited to find and apprehend Hattie, which inadvertently forces them to work together. With Hattie’s life hanging in the balance, the two must overcome their differences to secure the weapon and defeat Brixton, the super soldier who is also a ghost from Deckard Shaw’s past.

To call the film a powerhouse is an understatement, as watching Idris punch through steel or flip a two-ton character is worthy of the term “powerhouse.” Both ideas seem ridiculous right now, but trust me, once you see it, you will understand. This film leaves up from the other films in the franchise by continuing to up our tolerance for over-the-top action and near-impossible stunts. Just when you are sure that it can’t top itself, you end up having to pick your jaw up off the floor by what they do next.

The film does a good job of picking up the breadcrumbs teased by Johnson in the previous film regarding Deckard Shaw’s past and what made him go dark. Though gaining understanding about his circumstances does a lot to restore his status as one of the good guys, he is still not fully redeemed for killing Han in my eyes. Deckard isn’t the only one who has to confront his past, as Hobbs too is forced to confront the sins of his past. This theme makes it more than a mindless action film.

There are many things that made this film a hit, but there was one thing that really set it apart: the cameos. There are two big names, not previously connected to the franchise, who appear in the film. I’m not going to identify them because I want you to be as surprised as I was when I saw them. I will say that these two are two of the biggest stars in Hollywood, and I was completely caught off guard by their appearance. Both characters add a heaping dose of comedy to the film.

Not that the film needed much help in this arena, as the banter between Hobbs and Shaw had me rolling. They still don’t trust each other, and they are not shy about sharing their opinions about each other’s looks and abilities. Needless to say, their chemistry alone is why they got their own film.

Hobbs & Shaw is presented in its original aspect ratio of 2.39:1. The Ultra high-definition 2160p  image is arrived at by an HEVC codec with an impressive average bitrate of 70 – 80 mbps. Unlike other films in the franchise this doesn’t have the collection of shiny bright cars so that colors are actually somewhat muted by the often dreary or gritty environments. But that’s a strength of HDR that is often overlooked. You get wonderful resolution even under low-light conditions and the elements of rain stand out starkly in those environments. Detail is most obvious in close-ups. You get some fine facial features and that builds on the characters. Surprisingly that’s more true of Vanessa Kirby who does some fine acting with her eyes. There are some nice establishment shots and colors seep into the film a bit when we get to Samoa.

The Atmos track defaults to a pretty average 7.1 mix. I have to admit that I expected more bang from an aggressive surround mix. There are certainly some finer moments in that department but I found the mix surprisingly tame. Subs absolutely fill any of that void so it’s not exactly a quiet audio presentation. Careful attention is paid to dialog here and that’s often more appreciated than you might expect. The score weaves in and out of the mix and delivers the necessary emotional beats.

The extras are on both the Blu-ray and UHD discs. They are both in HD.

Alternate/Deleted/Extended Scenes: (34:29) There is a whopping 22 scenes with the handy play all option.

Johnson & Statham – Hobbs & Shaw: (3:28) The first of a series of character/actor profiles. This one concentrates on the titular characters.

Progress On A Fight Scene With Director David Leitch: (4:57) The first of many small features on the action of the film.

The Bad Guy: (2:00) This character profile is on Brixton played by Idris Elba.

The Sister: (3:58) This time Hattie played by Vanessa Kirby gets profiled.

The Matriarch: (3:20) This one focuses on Helen Mirren’s cameo character.

Hobbs‘ Family Tree: (3:20) The Samoan Hobbs family gets a profile.

Keeping It In The Family – A Conversation With Roman And Dwayne: (4:56) Dwayne Johnson and Joe “Roman Reigns” Anoa talk about their long relationship and how their families have crossed throughout the years.

Blind Fury: (1:58) Can you believe another action feature?

A film that is likely to serve as the catalyst for their own continuation series. A new enemy has been introduced, and they appear prepared to fight it together. What does this mean for the future of the characters with the Fast and Furious franchise is unclear, but if I had to guess, we won’t be seeing them in the ninth or tenth installment. Because let’s face it, there’s going be a tenth installment.

Jeremy Butler is a film school graduate of the International Academy of Design and Technology. He is been writing for Upcomingdiscs since 2012; however, movies have played a big part of his life for much longer. Favorite genres include horror, science fiction/fantasy, and comedy. Favorite movies are V for Vendetta, Boondocks Saints, Kiss Kiss Bang Bang, and The Godfather.
Midway (2019) Popstar: Never Stop Never Stopping (Limited Edition Steel Book) (Blu-Ray)