Posted in: No Huddle by Brent Lorentson on November 18th, 2019 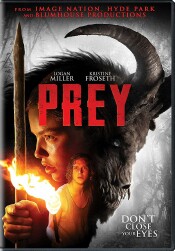 Blumhouse Productions has been the go-to company when it comes to horror and suspense films being marketed for the more mainstream audiences. The Purge films, Happy Death Day, and most recently Halloween (2018) have been some of their successful releases, though they’ve had several other films that didn’t fare so well that you can catch on Netflix. Now there is Prey. I knew going in this would be a Blumhouse film; I just wasn’t sure if I’d be watching a potential genre gem, or if it would be a dud.  As it turns out, it’s somewhere in between, and I’m a little surprised that there seems to be little to no marketing campaign for this one. The film starts off innocently enough with Toby (Logan Miller) at home and on his cell phone. While Toby is immersed in his social media, outside his father is being attacked by a couple of robbers and is killed. This sequence is a bit of a bummer; it’s lacking anything that resembles tension, and while it’s attempting to insert this message about today’s youth being disconnected from the real world, it just falls flat. We don’t get to see Toby deal with loss or guilt, instead the film has us follow Toby as he in enrolled in a “Lost and Found” program that has people spending three days and three nights alone on a tropical island. It seems like it would almost be paradise, but all they are left with is a backpack filled with some supplies, and in case of emergency, you get a flare.  OK, I was in scouts for 12 years, and there was never a time where they would just abandon us for three days. On our own and with our troop we had extensive wilderness survival training, so to see this was not only reckless but unbelievable. Even with shows like Survivor, there is a camera crew and medics on standby incase anything goes wrong. But for the sake of cinema and needing to have the suspension of disbelief, I ignored all this and let it unfold.  Toby is not on the island very long before his backpack is torn apart by monkeys that steal his food, so Toby is forced to settle for shellfish, and you just know this can’t end well.

Then we get to the mysterious monster on the island. Toby quickly discovers there is something on the island that is hunting the animals, and for a while he feels like he’s the one being hunted, that is until he comes across Madeleine (Kristine Froseth) who has been stranded on the islands for years with her mother.  Madeleine quickly gives Toby a crash course on the rules to surviving on the island and about avoiding the monster. Now here is where things get hard to believe again. The group Toby is with has been using these islands for a while, so it shouldn’t be hard to believe other people have explored or travelled past this island over the years, so why would Madeleine and her mother still be “stranded”?  Thankfully this does get addressed in its own way as the film attempts to give audiences a twist, though really it isn’t much of a twist to begin with.

As the film progresses it simply gets to be harder and harder to believe, and it just gets silly.  Logan Miller has to carry the load of this film his own, and when it comes to his performance, he’s actually one of the film’s positives.  The cinematography is better than expected for this film’s budget, but one thing is missing, and I’ll put more of the blame on the director for this, the lack of suspense in this film.  How is you have this huge jungle at your disposal and you don’t make it a character? There’s little to no attempt to make the jungle a foreboding place; there’s no attempt at mystery.  This is the film’s greatest failure. Sure, you can say the filmmakers were avoiding clichés, but if that’s the case, why bother with this plot or genre period?  When you do a haunted house film, you make the haunted house mysterious and foreboding. When you do movie an island with a monster on it, you make the island and monster scary. These are Horror movie basics.

The film is riddled with plot holes and is a bit inconsistent when it comes to tone, but considering its runtime is less than 90 minutes, this can be ignored.  While the film has plenty of potential, it never reaches what it could be, and in the end the story feels recycled.  After watching this, I can understand why Blumhouse is going with a more low-key release. Maybe one day they’ll revisit this story and inject more money and a better writer and director for the reboot.

Brent Lorentson is a horror writer and film critic based out of Tampa, Florida. With a BA in Digital Film, he co-wrote and co-directed Scavenger Hunt. His short stories have appeared in various horror anthologies. In 2019 his short script Fertile Blood will be a part of the anthology horror film Slumber Party. He is currently working on his first novel A Dark and Secret Place set to be released in late 2019. Favorite Films: Taxi Driver, Fight Club, I Saw the Devil, The Wild Bunch, Dawn of the Dead, A Clockwork Orange, Pulp Fiction, Heathers, The Monster Squad, and High Fidelity.
10 Minutes Gone (Blu-ray) Charlie’s Angels (2019)