Posted in: Disc Reviews by Brent Lorentson on November 15th, 2019 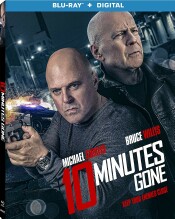 It’s frustrating seeing a film starring Michael Chiklis and Bruce Willis and knowing before you’ve even watched five minutes of the film that it’s not going to be good.  I mean, come on; you have the star of The Shield and then an action movie icon, but neither can save this film.  10 Minutes Gone is one of those films where on paper it seems like a surefire hit, but somehow instead of a white-knuckle action thriller, the result is a snooze-fest that will keep you guessing as to why these actors signed on for this film. Frank (Chiklis) has been hired by Rex (Willis) to pull off what seems to be an easy heist.  Frank and his team seemed to have thought of everything and have even put together some backup plans, but as expected, the heist ends up going bad, and in the process Frank is knocked out cold and loses 10 minutes. In this time he’s lost possession of the jewels, and he needs to figure out what happened to them before Rex has him killed.  It’s not a bad idea for a movie, but it’s the execution of this film that is a mess.  Willis and Chiklis do their best to make the dialog work, and at times the can make the scenes flow, but once the film shifts to any other character you start to wonder if this film was written by a 12-yea- old boy who just binged a bunch of older action/ detective films while chugging Red Bull and snorting lines of sugar.

The big mystery of the film is who set up Frank and his crew; the film does a good job at setting up a variety of suspects, though it doesn’t take much to figure things out.  One thing, though, that is rather frustrating is when Frank goes to question one of his guys and the guy is “hiding out” at some underground gambling room.  I have my issues with this character’s decisions already, but what is more distracting is how the scene is shot. The amount of lens flares in this sequence is nauseating.  This might be one of the worst shot scenes I’ve seen in a film. Sure, Spielberg uses lens flares, and the world knows how JJ Abrams gets carried away with them, but this sequence is a technical marvel at how just about everything has a lens flare, and someone actually thought that this looked good and it wasn’t a distraction.

The big idea of the film was to dig into the notion about honor among thieves, but really, I’m not convinced any of these characters are elite thieves.  The easy film to reference would be Oceans 11 or even Sexy Beast when it comes to good heist films.  I’m a sucker for a good heist film. Honestly, I’m more forgiving if the film can at least be fun and deliver some cool sequences, but 10 Minutes Gone just fizzles at every twist and turn the plot takes.  The film’s direction doesn’t help much, as it relies heavily on flashbacks that take us back to the heist where we get to see what other characters see.  The whole time we’re following a guy attempting to piece a mystery together that when we finally get the answers, well, to put it simply, it’s cheap and lame.  I understand this is a straight to Blu-ray release, but would it have been so bad to spend a little extra on another rewrite of the script from someone who actually cares about the genre?

10 Minutes Gone is presented in the aspect ratio 1.85:1.  The 1080p image is arrived at with an AVC MPEG-4 codec at an average of 30 mbps.  The look of this film is a bit all over the place.  At times the image can look sharp; this is mostly in the exterior shots, though at other times the picture seems to be over-lit. The gambling scene with all the lens flares looks like garbage. When it comes to the actual transfer there are no issues, but really, this isn’t a great-looking film.

The DTS HD-Master Audio 5.1 track is much better than the video presentation. The gunfights and action pieces are well done, and there is nice work with the bass and subs here.  The dialog also comes through lean and crisp, which is a relief, because there is more dialog than action that drives this film.

Making of 10 Minutes Gone: (7:19) Mostly a collection of interviews with some behind-the-scenes footage.

Interviews: (28:43) There are five interviews here, one with the director Brian A. Mille. The other more noteworthy interview is with star Michael Chiklis. The other three interviews are with some of the supporting cast.

If you are up late and looking for things to watch on Netflix and you come across this film…well, hopefully this will help you go to sleep. While I’m a fan of Willis and Chiklis, I can’t say that there is anything I enjoyed about this film.  Both actors seem as though they are there for the paycheck, and they know this will be a film forgotten weeks after its release. It’s not the worst film I’ve seen, but it’s one that makes me wonder, what’s the point of putting these two together and making a movie if you’re not going to step up your game in the process?  If this was a student film or a first time filmmaker I could forgive a lot, but with the talent involved, this is a disappointing mess.

Brent Lorentson is a horror writer and film critic based out of Tampa, Florida. With a BA in Digital Film, he co-wrote and co-directed Scavenger Hunt. His short stories have appeared in various horror anthologies. In 2019 his short script Fertile Blood will be a part of the anthology horror film Slumber Party. He is currently working on his first novel A Dark and Secret Place set to be released in late 2019. Favorite Films: Taxi Driver, Fight Club, I Saw the Devil, The Wild Bunch, Dawn of the Dead, A Clockwork Orange, Pulp Fiction, Heathers, The Monster Squad, and High Fidelity.
Popstar: Never Stop Never Stopping (Limited Edition Steel Book) (Blu-Ray) Prey (2019)