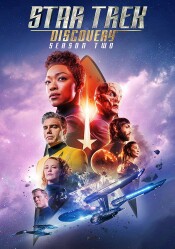 I should confess from the beginning that I am a very dedicated Star Trek fan. I’m not a Trekkie or a Trekker, I’m a fan. I have often allowed my fan status to cause me to embrace the franchise even when it wasn’t necessarily so good. As a young 15-year-old kid I attended the first 10:00 AM showing of Star Trek: The Motion Picture with a handful of friends on the opening day. We stayed through six showings and left sometime after midnight the following day, occupying the front row center and subsisting off the day’s more limited concession offerings. Basically candy, popcorn and soda. Little has changed except for the lack of responsibilities that would allow me to spend 14 hours watching a single film over and over again. I’m still reluctant to dismiss anything Star Trek, but that’s nearly what happened as I watched the first season of Star Trek: Discovery last year.

The series happens approximately a decade before James T. Kirk becomes captain of the Enterprise. That means the show exists in a world that should be somewhat familiar to me. It wasn’t. It’s hard to imagine that in just 10 years technology would take a significant step backward, and uniforms and ship designs would undergo such a drastic change. Oh, and that Starfleet Command would move from Paris to San Fran. But all of this is the work of Alex Kurtzman. And we all know that he has a superpower. He has the ability to take a beloved franchise and run it straight into the ground at warp speed. But why is he always messing with things that I love? His Dark Universe over at Universal destroyed the hopes of seeing so many of my favorite Universal classic monsters once again reunited on the big screen. Fortunately, he was fired from that task after the abysmal Tom Cruise The Mummy failed in every way a film could fail. Thanks for that, Alex. Now you won’t be happy until you kill Star Trek.

That was certainly my attitude going into Season 2. I don’t think I was alone, and somewhere between the seasons I think Kurtzman figured out that he was painting himself…and future versions of Star Trek, into a very narrow corner. I have to admit that this second season shows a concerted effort to get out of the traps he set for himself and heal the many self-inflicted wounds. There’s finally a bit of an admission that it could have been a huge mistake to set the show when and where it did. I can tell you that by the end of the season the course correction is a drastic one, and what we will be left with in the future will be something that can develop its own mythology and create its own legs. Where they go with that clean slate, who knows? Part of me doesn’t trust Kurtzman to make the best out of his new lease on Star Trek life. Of course, part of me hopes not only that he can, but that he will.

The season starts with the anticipated reveal of Discovery’s encounter with the USS Enterprise. Kirk isn’t there yet. It’s still Captain Christopher Pike’s ship, and he’s played by Anson Mount. His ship has undergone severe damage and will need considerable time in dry-dock before he can assume command there. He ends up taking over the captain-less Discovery when a new emergency confronts Star Fleet Command. There have been seven mysterious signals discovered spread out across the galaxy. They need to be explored. The Klingon War is now over with the houses united under L’Rell (Chieffo). The Klingon-made-human Ash Tyler/Voog (Latif) has brought her a son, but their existence is a threat to the empire she is building. During the turmoil the Enterprise was deliberately kept far away from the conflict so that her”big guns” and “big brains” could help pick up the pieces if the war went horribly wrong. Now Captain Pike will command Discovery. Because of her Spoor drive she’s the only ship with a chance of reaching the source of these red signals. With each arrival we find they have coincidentally been brought to a milestone moment with the lives of entire civilizations on the line. At the crucial moments people see a bright red “angel” that appears to be guiding these moments in time.

That’s when we meet Spock (Peck). Burnham (Martin-Green) is the adopted child of Spock’s family, and they have been estranged for many years. Of course, we’ll eventually find out what caused the rift, and their relationship will be key to the signals and angels. It appears they appeared to Spock when he was very young, and many drawings of that encounter survive from his childhood. Spock has been changed and hurt by it all, and now he teams up with Discovery to solve the mystery. You won’t see answers until great battles are fought and we get more background on our players.

Flashbacks give us more of the story between Burnham and Spock, but it’s all so contrived that I believe it takes away from the drama. We go behind the scenes with Starfleet’s Section 31, where Ash has now found a home, and you never quite know if these are good guys or bad guys. They have been corrupted by an AI who wants to take over all life in the galaxy. Time travel has players from both sides of that future conflict fight it out in the here and now. Turns out a Terminator machine was sent back in time to kill Sarah Conner so the savior of mankind will never be born. OK, I made that last part up, but damn if the stories don’t collide quite a bit this season.

Some of the best stuff involved Doug Jones’ character Saru, who gets a good bit of background this season. We visit his home world following one of the signals. There are two sentient species on his world. Saru’s people are the subspecies who live in fear because the dominant warp-capable species hunt and cultivate them. When Discovery encounters a dying entity with millions of years of exploration data, we learn that the circle of life on Saru’s world isn’t what they were all led to believe. We meet his sister and learn a ton about the culture. It’s a highlight of the season.

Spock and Burnham are connected to these events, and it isn’t until the very end that we find out why and it leads to a sacrifice by the Discovery crew that gives the series the re-set it so desperately needs. The result is tighter writing and a much better story arc. The show is improving, and I am hopeful that upward trend will continue.

Anson Mount already had a Trek connection. He played the lead on Hell on Wheels, where his adversary was played by Colm Meany, who played Chief Miles O’Brian in Next Generation and Deep Space Nine. He is absolutely perfect for Pike. I hardly recognized the look, but he might well be one of the best captains to ever appear on the show. It’s disappointing that he will go his own way and we are not going to follow his adventures. I would be so much more compelled by that story than the one we’re on. I hope we see Pike again.

There are some extras to go along here. I was very disappointed that CBS opted to send us the DVD instead of the Blu-ray. I can’t really recommend it. This show requires the better resolution to truly appreciate. It’s the first time we were sent a Trek DVD when a Blu-ray was available. Hopefully it’s not going to be a trend. I can’t give you the kind of in-depth look you expect from our Trek coverage, “And if you ask me any more questions, I’m going to start crying like a baby tribble in the kill zone.”

Gino Sassani is a member of the Southeastern Film Critic's Association (SEFCA). He is a film and television critic based in Tampa, Florida. He's also the Senior Editor here at Upcomingdiscs. Gino started reviewing films in the early 1990's as a segment of his local television show Focus. He's an award-winning recording artist for Omega Records. Gino is currently working on his 8th album Merchants & Mercenaries. Gino took over Upcomingdiscs Dec 1, 2008. He works out of a home theater he calls The Reel World. Favorite films: The Godfather, The Godfather Part II, The Body Snatcher (Val Lewton film with Karloff and Lugosi, not the pod people film), Unforgiven, Gladiator, The Lion King, Jaws, Son Of Frankenstein, The Good, The Bad And The Ugly, and Monsters, Inc.
Charlie’s Angels (2019) American Dreamer (Blu-ray)