Posted in: Disc Reviews by Brent Lorentson on November 22nd, 2019 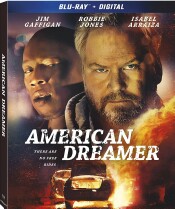 I have to be honest; when I got this title and saw that Jim Gaffigan was starring, I didn’t know what to expect, but I went into this film with some low expectations.  I’m a fan of Gaffigan, and I own a few of his stand-up albums, but seeing him headlining a thriller, well, it was a tough leap for me.  Now that I’ve seen the film, I got to say I’m impressed by what he pulled off with this film.  That being said, as I was watching this film, I couldn’t help but see a similarity between Gaffigan and the late Philip Seymour Hoffman.  I doubt this was intentional, and perhaps it’s just my subconscious attempting to make these connections, but Gaffigan’s performance in this film  is on par with many of the performances we saw from Hoffman in his later years. As for the film, American Dreamer follows Cam (Gaffigan), a down-on-his-luck schlub who at one point was living the American dream: a good job, a nice home, and a wife and child.  Then he lost his job, and everything else seemed to disappear around him. Now he’s a driver for a ride share company, where he struggles with paying child support and has had a bit of a mental breakdown.  Early in the film we get to see him in a parking lot near an airport, watching as planes are coming and going, and its obvious Cam is dreaming of an escape from his life.  He ends up getting a fare that has him driving a small-time drug dealer, Mazz (Robbie Jones) around town. The setup here seems simple, as it establishes who both of these men are, but over the course of one night we’ll see these men make some difficult decisions, and by the time the film ends, you will definitely feel differently about these characters.

After reading the blurb on the back of the Blu-ray and starting this film, I was a little worried that this would be something akin to Collateral meets Falling Down. When we see Cam come to his breaking point and he decides to kidnap Mazz’s son, sure, it’s a drastic leap for someone to make, but the way the writers and director handle this situation, it still remains in the realm of possibility.  That pretty much is how the rest of the film plays out; there are a lot of worst-case scenarios that happen to both Cam and Mazz, and it’s what keeps the viewer on the hook.  What I was most impressed by is how co-writer and director Derrick Borte wasn’t afraid to go dark with this film, because there are a few decisions made in this film that are pretty risky, and most filmmakers would avoid entering this territory, but personally I think it’s the risk that makes this film work. (It would be a huge spoiler if I were to say what this risk was.) But by taking that risk, the viewer knows anything can happen in this film. and it’s what literally kept me guessing at how this would all end for Cam and Mazz.

A good portion of the film takes place in Cam’s car. but at no point did I find this film boring. When the film strayed away from the car. I noticed things seemed to be more chaotic, and the car was almost the safe space.  For instance, when we see Cam outside his car, it’s when he’s visiting his ex-wife and attempting to see his son, but she ends up calling the police.  Another moment Cam leaves the car is when he’s pulling off the kidnapping, which was never his intention in the first place.  As for Mazz, when he steps out of the car, he’s constantly dealing with drug dealers and drug addicts and getting into shootouts.

Then there is the films ending.  A film like this could have ended in a variety of ways, some good and many bad, but the one they went with is definitely a risky one, and for me it’s what got me to fully embrace this film.  What I’m surprised about is how this film managed to keep such a low profile. It may not be Academy Award material, but it’s definitely better than many films that have come out this year. Sure, it doesn’t have huge star power or a $100-million-ollar budget, but it has a great little story.  This is one I hope finds an audience on disc and through streaming services, because it’s a fun little ride that will keep you engaged from start to finish.

American Dreamer is presented in the aspect ratio 2.39:1.  The 1080p image is arrived at with an AVC MPEG-4 codec at an average of 28 mbps.  A good portion of the film is shot at night and inside a car, so as you would expect there are not a lot of wide shots, and this definitely helps when it comes to preserving the image quality.  The close-ups are crisp and allow for plenty of detail, but as the camera goes wider there is a bit of haze to the image.  This isn’t a very flashy film, but it is still well shot considering the limitations of the film being 75 percent inside a car.

The DTS HD-Master Audio 5.1 track is also not very flashy, but it gets the job done.  This is a very dialog-heavy film, and the dialog is delivered clearly and nicely balanced.  Even in scenes where we hear action from a distance (when we are still in the car with Cam), we can hear the gunfire and arguing clearly.

No Free Rides: Making American Dreamer (29:40) Here there are a collection of interviews with the cast and crew with some behind-the-scenes footage added.

I really had fun with this one.  This is a thriller that is perfect for a late-night watch while curled up on the couch and will get a discussion going after the credits have passed.  It’s not perfect, but this is definitely a quality film worth sitting down for 90 minutes to watch.

Brent Lorentson is a horror writer and film critic based out of Tampa, Florida. With a BA in Digital Film, he co-wrote and co-directed Scavenger Hunt. His short stories have appeared in various horror anthologies. In 2019 his short script Fertile Blood will be a part of the anthology horror film Slumber Party. He is currently working on his first novel A Dark and Secret Place set to be released in late 2019. Favorite Films: Taxi Driver, Fight Club, I Saw the Devil, The Wild Bunch, Dawn of the Dead, A Clockwork Orange, Pulp Fiction, Heathers, The Monster Squad, and High Fidelity.
Star Trek: Discovery – Season Two Official Secrets