Posted in: The Reel World by Jeremy Butler on December 1st, 2019 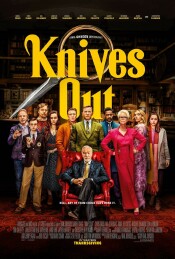 Who killed renowned novelist Harlan Thrombey? Was it the dutiful son? Was it the rebellious grandson? Was it the sweet caretaker? The answer to this question is actually far more complicated than I expected, as Knives Out delivers a very engaging and extremely entertaining murder mystery in time for the Thanksgiving weekend. This story is chock-full of twists and turns that will keep you guessing until the ending credits. This Rian Johnson-helmed film is worth a trip to the theater because of its excellent plot and all-star cast that includes Chris Evans, Jamie Lee Curtis, Daniel Craig, Christopher Plummer, Michael Shannon, and many more. Harlan Thrombey is cleaning house on his birthday, looking to stop indulging his spoiled and entitled children and grandchildren. After years of catering to their every whim, he has decided that he will no longer bankroll their lifestyles. Well, that sounds like a motive for murder if I ever heard one, and that is just what happens when his body is discovered the day after his birthday. Initially suspected to be suicide, the knives come out when renowned private detective Beniot Blanc arrives and announces that he suspects foul play.

With the suspicions of murder in the air, as well as the substantial estate left behind by Harlan, the family wastes no time turning on one another. Caught up in the family drama as well as the murder investigation, caretaker Marta Cabrera is quickly in over her head with the biggest surprise to come. Family secrets will be revealed, and you won’t be believe who the killer is.

Money really does bring out the worst in people, and that idea is on full display in this film. On the bright side, it makes for entertaining storytelling. Rian’s decision to intercut the interrogation of the family members to show them giving contradictory information was good one, as it gives a great insight into the family’s dysfunction. The best one in this sequence hands down was Don Johnson; he is just one quip after another and blunt with his opinion of his nephew by marriage. This sequence is also our introduction to Craig’s character, who is among the film’s most interesting characters minus his accent. He’s quick-witted, determined, very analytical, though he does have one very clear blind spot.

The caretaker Marta is the audience’s window into this world, and she is a compelling character; there is an innocence to the character that makes her instantly likable. Evan’s Ransom is the opposite. Of the family is quite possibly the most entitled and spiteful, but Evan’s delivery and natural charisma makes it impossible to dislike the character no matter what he is doing.

The only thing that gave me pause was the circumstances of Harlan’s death, which I felt came quite early in the film’s run. I was expected it to be more drawn out; having the mystery spoiled was momentarily off-putting for me. It was a bittersweet moment for me. Fortunately just because we learn the circumstances doesn’t mean that we fully understand what happened, as the truth turns out to be much more complicated than I had imagined.

There are some underutilized talents in the film that were obviously brought in to be a bigger draw for the film, such as LaKeith Stanfield as Detective Eliot; Stanfield has been a breakout star since the television series Atlanta, and his star has continue to climb with him crossing over to the silver screen. However, in this film he is kind of wasted and mainly acts as a sounding board for Craig’s Blanc to voice his theories and suspicions. Also there is Katherine Langford, who many will recognize from 13 Reasons Why, and most likely her cameo appearance in the deleted scenes of Avengers Endgame as Tony’s grown-up daughter Morgan. Though it is great to see her and she has one brief moment of crisis in the film, her character is not central to the plot and could easily be removed without much consequence. That is not a reflection on Langford at all, merely an observation that her talents were been slightly wasted.

Knives Out faces stiff competition for the box office crown this weekend, and though I wholeheartedly believe that the film is worthy of the title, I have my doubts due to the Disney powerhouse film that it is up against. Still I encourage all who love a good murder mystery to head to the theater this weekend and support the film. Who knows, maybe we can get lucky and it can obtain that much-deserved honor.

Jeremy Butler is a film school graduate of the International Academy of Design and Technology. He is been writing for Upcomingdiscs since 2012; however, movies have played a big part of his life for much longer. Favorite genres include horror, science fiction/fantasy, and comedy. Favorite movies are V for Vendetta, Boondocks Saints, Kiss Kiss Bang Bang, and The Godfather.
Mary (Blu-ray) Dark Waters