Posted in: Disc Reviews by Brent Lorentson on December 1st, 2019 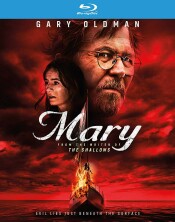 For some the ‘haunted house’ sub-genre is a bit stale. Sure, there have been some great films and TV shows that have tackled the sub-genre, but many of the films tend to be recycled trash.  Personally I’m a fan of haunted house flicks, even the bad ones I tend to find at least somewhat enjoyable.  Mary may not fall into the classic definition of the haunted house film, mostly because it takes place on a yacht and in the Atlantic Ocean, but really it plays by the same rules.  Seeing a familiar story unfold in a different location, where the characters have no place to run to, is enough to inject new life into a stale story, but is it enough to keep viewers engaged to the very end? Mary is a ship that that David (Gary Oldman) finds at a boat auction and ends up purchasing with hopes of turning it into a vacation sailboat his family can use to run a business with.  To say Mary is a “fixer-upper” would be the understatement of the decade, as it seems to be falling apart from the inside out.  We’ve seen it before, where the protagonist finds some busted-up car, bike, boat, etc., and what follows is the required montage of the protagonist fixing up the boat. Well, the film of course delivers the montage, but as montages go this one is lame … It’s as though the filmmakers never saw a film in the 80’s ( a time when every film seemed to have a montage cued by some 80’s pop or rock song).  It doesn’t take long before his family suspects that there could be something wrong with the boat.  Now here’s the fun little tidbit: David is struggling to patch things up with his wife Sarah (Emily Mortimer) after discovering she had cheated on him.  So yes, David’s need to repair the ship is indeed a metaphor for his need to repair his marriage.  Honestly, having Sarah’s affair brought into the story is simply a distraction from the plot. When you consider the film is only 84 minutes, it becomes too much drama to attempt to flesh out in such a short amount of time, and because of this wasted time, it does take away from us getting attached to these characters.

Another issue I have with the film is that it is told in flashbacks; basically Sarah is in police custody and is telling her story to Detective Clarkson (Jennifer Esposito).  Here is a huge problem: if you’ve seen The Usual Suspects, you will see through this movie.  Had this film kept it simple and just told a linear story it would have been fine, but in its attempt to be clever this film falls apart so quickly.  Everything surrounding the story on the boat works fine, but these scenes between Sarah and the detective ruin all the tension that the film has been building for itself. Most damning is that it reveals the demise of characters and the survival of others.  Even when the film delivers a fun back-story to the ship, this fun twist has already been ruined, because we know from the start Sarah is telling the story about what happened on the ship.

Strip away having Sarah being interrogated and add in more shots on the boat and on the ocean to develop some atmosphere, and I feel you have a better film.  It’s frustrating, because there is definitely a good film here, but to cut out what hurts it would leave you with something that equates to a glorified television episode.  I’m not sure why Gary Oldman agreed to this film. His performance is OK, but nothing that stacks up to his numerous memorable performances. What’s missing more than anything is atmosphere. A little bit of that will go a long way in a film, and Mary has none of it.

Mary is presented in the aspect ratio 2.40:1.  The 1080p image is arrived at with an AVC MPEG-4 codec at an average of 25 mbps. Considering a good portion of the film takes place on a boat out at sea, the visuals are a bit bland.  When it comes to depth of black levels, this is pretty good but not stellar.  When we are in the cabins below deck, we still get some nice detail in some low-light scenes.  As for the scenes at night above deck, this is a bit of a mixed bag; some detail gets lost, but nothing too distracting.  There are points where there is some crushing, but again, it is not going to take you out of the story.

The DTS HD-Master Audio 5.1 track is kind of standard for this kind of film. The bass is used a bit for an impact with the jump scares.  The dialog is clear throughout.  There is a bit of ambient sound that is nice involving the sounds of the boat rocking in the ocean.  Is it a great dynamic mix?  No, but it gets the job done for this level of film.

The Making of Mary: (6:07) A very brief making-of segment for the film. Mostly interviews cut with footage of the film.

A Family At Sea: (4:38) Really this should have been cut together with the making-of segment.  Mostly this is just interviews with cast talking about working together on the film.

Having Gary Oldman in a ghost ship film is all I needed to want to give this film a shot. There was so much potential in this premise, but the film never manages to achieve that potential.  I don’t hate the film, but I’m certainly frustrated with it.  If you’re a big Gary Oldman fan then go ahead and check this out. If you have 90 minutes to waste, it’s something to throw on while doing laundry or if you’re having trouble sleeping. I just wouldn’t go out of my way for this one.

Brent Lorentson is a horror writer and film critic based out of Tampa, Florida. With a BA in Digital Film, he co-wrote and co-directed Scavenger Hunt. His short stories have appeared in various horror anthologies. In 2019 his short script Fertile Blood will be a part of the anthology horror film Slumber Party. He is currently working on his first novel A Dark and Secret Place set to be released in late 2019. Favorite Films: Taxi Driver, Fight Club, I Saw the Devil, The Wild Bunch, Dawn of the Dead, A Clockwork Orange, Pulp Fiction, Heathers, The Monster Squad, and High Fidelity.
Happy Thanksgiving Knives Out