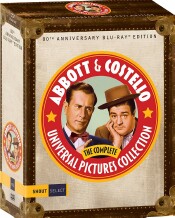 I think I see your problem. You have this list. It’s a list of people you need/want to buy a Christmas gift for. The trouble is that they’re into home theatre, and you don’t know Star Trek from Star Wars. You couldn’t tell a Wolf Man from a Wolverine. And you always thought that Paranormal Activity was something too kinky to talk about. Fortunately, Upcomingdiscs has come to the rescue every Christmas with our Gift Guide Spotlights. Keep checking back to see more recommendations for your holiday shopping. These gift guides ARE NOT paid advertisements. We take no money to publish them. This Christmas you are in for a great treat. Shout Factory is becoming the laugh factory, and you’ll find there is no one better at making you laugh than Bud Abbott and Lou Costello. Nearly all of their films have been missing in high definition on Blu-ray. The Universal Classic Monster Collections gave us the Abbott & Costello meet the monsters films, but the rest of the collection has only been available on DVD with poor transfers. Now Shout offers an amazing 28 of the dynamic duo’s films on Blu-ray. It’s an astonishing collection that had me doing back flips when I first heard about it. Abbott & Costello The Complete Universal Pictures Collection is so hot it might just set someone’s Christmas tree on fire. Who are Abbott & Costello, you ask?

Bud Abbott and Lou Costello began their career completely by accident. Bud Abbott had tried his hand at doing the straight man bit with limited success. One night in 1931 he was working as a cashier for a vaudeville company when Lou Costello’s partner came down with an illness. The performer needed a stand-in, and Bud Abbott filled in for the night. It was a temporary gig, to be sure. A temporary gig that happened to last 25 years. The two continued to work together on stage. While the team certainly reused a ton of the classic routines of the era, there was something unique and clever about the duo. The natural way in which they fell into each other’s lines was a rare sight indeed. They eventually stood out for their ingenious word play, culminating in one of the most famous comic routines in history, Who’s On First.

The pair next took their act to the airwaves — radio airwaves, that is. They became a staple in the medium and eventually the highest paid performers in that industry. Films weren’t really much of an option at first. They were still mostly silent, and while comedy thrived in that era, Abbott and Costello’s brand of humor just would not have worked. But when sound became more economical and standard, the boys were thrown into the pictures. In 1940 they would star in a film called One Night In The Tropics. They would continue to make films for the next 14 years at an incredible pace. They made several films a year and were soon financing Universal studios with their output and box office income. Perhaps their most famous films were the monsters movies where Universal teamed their new moneymaker with the one before. In Abbott And Costello Meet Frankenstein, Bela Lugosi and Lon Chaney, Jr. would both reprise their famous Dracula and Wolf Man characters to the delight of fans of both franchises. Boris Karloff considered himself too old to don the heavy boots of the titular monster, which was played by Glenn Strange, who had performed the role in both House films. So he was still a legitimate part of the horror film cycle. The boys would get their chance to face Karloff later, not once, but twice.

Here are the films you’ll get:

One Night In The Tropics

The Time Of Their Lives

The Wistful Widow Of Wagon Gap

Abbott & Costello In The Foreign Legion

Comin’ Round The Mountain

You get the duo’s most classic bits that include: Who’s On First, Two Tens For A Five,

Gino Sassani is a member of the Southeastern Film Critic's Association (SEFCA). He is a film and television critic based in Tampa, Florida. He's also the Senior Editor here at Upcomingdiscs. Gino started reviewing films in the early 1990's as a segment of his local television show Focus. He's an award-winning recording artist for Omega Records. Gino is currently working on his 8th album Merchants & Mercenaries. Gino took over Upcomingdiscs Dec 1, 2008. He works out of a home theater he calls The Reel World. Favorite films: The Godfather, The Godfather Part II, The Body Snatcher (Val Lewton film with Karloff and Lugosi, not the pod people film), Unforgiven, Gladiator, The Lion King, Jaws, Son Of Frankenstein, The Good, The Bad And The Ugly, and Monsters, Inc.
Dark Waters Where’d You Go Bernadette? (Blu-ray)