Posted in: Disc Reviews by Brent Lorentson on December 4th, 2019 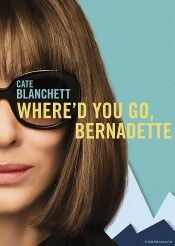 When a film comes along directed by Richard Linklater, I’m always going to have a little interest in what he’s up to.  He’s one of those directors I’ve followed from the 90’s that every few years he cranks out a film that I can’t help but enjoy.  Dazed and Confused, his Before Sunrise series, Boyhood, Everybody Wants Some!!, School of Rock, and several other of his films are proof enough that he has a solid filmography, but he’s never quite been  the guy to make a splash at the box office. Because of his track record, I’m a bit surprised to see his new film Where’d You Go, Bernadette managed to squeeze into the tail end of the summer when the trailers would have me thinking this could be an awards-caliber film.  Well, as it turns out, the film is a swing and a miss.  While I still enjoyed the film, it’s a bit frustrating, because this film seems like it’s so close to being something great, but it just manages to disappoint throughout.

Bernadette Fox (Cate Blanchett) is a bit of a mess, to put it lightly.  She’s more than a little difficult to get along with, she heavily self-medicates, drinks, and seems to hate most people with the exception of her family.  From the start it’s a bit difficult to decide if Bernadette is simply a quirky individual or if she is genuinely just an unlikeable person. The problem is the film doesn’t seem to know either, so with each awkward situation we see Bernadette get into, she just becomes a frustrating and tiresome character.  We see she doesn’t get along with her neighbors, and her relationship with her husband, brilliant computer animator Elgie Branch, played by Billy Crudup, is odd in its own way as well.  It’s hard to understand why they’d be on board for a last minute trip to Antarctica.

It takes a while for this film to get its footing, it offers up plenty of plot and character strings that really just don’t go anywhere.  BUT what saves this movie and kept me hooked was the relationship between Bernadette and her daughter, Bee (Emma Nelson).  There is a nice chemistry we get to see on screen with this mother and daughter, and when we see Bernadette with her daughter, we finally get to see a side of her that is likeable.  By the time the story gets to why Bernadette has become the person that she is, it’s pretty much too late to really win us over, but it’s enough to keep us in our seats.

The title of the film goes the literal route when Bernadette eventually decides to run away from her life, and it’s up to her husband and daughter to find her. The problem is, the more interesting story that delves into how Bernadette lost herself, her personality, and her passion for being an architect, we simply don’t get enough of.  There is a great moment in the film where we see Bernadette having lunch with one of her old friends, played by Laurence Fishburne. It’s a great character-revealing scene, but it seems as though it was for nothing.  Factor in that there is a “documentary” within the film that Bernadette watches (somehow unaware this was made about her despite it being about her rise and fall and being filled with friends and coworkers from her past), and it simply tells us all we “need” to know about her.  I really hated this story device; it just comes off as lazy, and really, though it was supposed to make us feel closer and understand her, because it’s nothing more than a video on a screen, it’s lacking the personal connection.

As the film continues with the journey of the father and daughter trying to find Bernadette, it just feels like a forced, whimsical journey that should have occurred sooner in the film.

There are many familiar faces that came together to make this film happen, and many of these talented people simply feel wasted.  While I’m not a fan of the first half of the film, by the time the film finally seems to find its direction, it simply feels too late.  I enjoyed what I saw, but in a few months time I’m curious how well I’ll remember this film.  Thankfully for those involved, their careers are established enough where they can afford to have a box office miss.  Emma Nelson may be the only one to gain from this film; she delivers a charming performance, and I hope to see her develop her career over the years.  Sadly, this film is a bit of a box office dud; it’s doubtful many will be really wondering where Bernadette went off to.

Where’d You Go, Bernadette is presented in the aspect ratio 1.85:1.  The 1080p image is arrived at with an AVC MPEG-4 codec at an average of 35 mbps. This is a really good-looking presentation that is filled with a robust color palette as well as unique textures.  Though there is a lot of color in the film, it still has a muted look to it.  When it comes to Bernadette, she has darker color palette, and there is a scene later in the film when she’s at a neighbor’s house where we see a distinct contrast in the color between the two characters.  As for detail in the characters faces, their hair, but also in their homes or when the film ventures to Antarctica, we get a decent amount of depth here.  For a film that is mostly a comedy, it is definitely one of the best looking presentations on Blu-ray this year.

The DTS HD-Master Audio 5.1 track is a very dialog-heavy film, so as expected the dialog is clean and clear throughout.  The ambience of the track is subtle, but there are moments where the audio is nicely put to use, most noteworthy being the mudslide, and when they are in Antarctica, there is a nice bit where it seems like we are hearing an ice shelf collapsing into the water.

Bringing Bernadette To Life: (14:47) Your standard behind-the-scenes look at the film with interviews with the cast and crew.  One thing I did like is how the author of the book the film is based on was interviewed, and her insights are nice and welcomed here.

Who is Bernadette: (4:57) A brief feature about the film’s lead character and what she means to the cast and director.

A second viewing can really help you see a film more clearly. For me, getting to revisit Where’d You Go, Bernadette for a second time got me to appreciate the film more.  This is a film I think would have done better being released in theaters during the holidays. It’s definitely a film that pulls at the heartstrings, and I think it will in time find an audience that will embrace it.  This is a title I definitely feel is worth checking out. It’s something perfect for a date night or for those looking for a family friendly film that doesn’t focus on entertaining the little kids.

Brent Lorentson is a horror writer and film critic based out of Tampa, Florida. With a BA in Digital Film, he co-wrote and co-directed Scavenger Hunt. His short stories have appeared in various horror anthologies. In 2019 his short script Fertile Blood will be a part of the anthology horror film Slumber Party. He is currently working on his first novel A Dark and Secret Place set to be released in late 2019. Favorite Films: Taxi Driver, Fight Club, I Saw the Devil, The Wild Bunch, Dawn of the Dead, A Clockwork Orange, Pulp Fiction, Heathers, The Monster Squad, and High Fidelity.
Holiday Gift Guide Spotlight: Abbott & Costello: The Complete Universal Pictures Collection Hustlers (UHD Blu-ray) (4K)