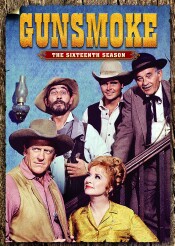 CBS still has the highest rated dramas on television. There have been quite a few good DVD sets from the network in 2019. Here’s a look at my recommendations. Part One will deal with some classic shows that CBS continues to put out.

This year CBS has released the 14th and 15th seasons. Just in time for Christmas, they’ve added the 16th and 17th seasons. For seasons 16 and 17 they’ve finally released them each together in one set instead of the half-season sets most of the years are collected in.

The setting for Gunsmoke was the by-now-famous Dodge City, circa 1870’s. Phrases like “get out of Dodge” would enter the popular lexicon as a result of this resilient series. Marshall Dillon (Arness) was charged with keeping the peace in Dodge City. The only other character to see the entire 20-year run was kindly Doc Adams (Stone). Star Trek’s own Doc, Leonard McCoy, took many of his traits from Doc Adams. He was the humanitarian of the city, always looking to help someone. Like McCoy, he had a taste for bourbon and a soft heart underneath a rather gruff exterior and was always ready with free advice. Dillon’s love interest throughout most of the series was Miss Kitty Russell (Blake). While there were certainly a few romantic undercurrents, the romance never came to fruition. Miss Kitty was a prostitute on the radio and was likely one here as well, but CBS chose to underplay that aspect of her character as a “saloon girl”. Finally, Dillon’s faithful sidekick deputy was Chester (Weaver). Chester often found himself in trouble and was the naïve son figure to Dillon.

This was the show that keeps on going. While Dick Wolf managed to match the 20 years, Gunsmoke still has more episodes than any scripted television series in history. At 635 episodes, it’s proved its lasting power. Only The Simpsons beats it, so it’s the longest-running non-animated show in television history. We’re now only three seasons away from having the entire series out on DVD. That’s going to be nice to see it all up there on your video shelves. “I’ve been waiting a mighty long time for this.”

Early in the year we got the ninth season of Bonanza, and just in time for Christmas we get Season 10 in those usual half-season sets. Amazon often bundles them together, and that’s your best bet.

In the late 1950’s, westerns accounted for six of the top ten programs on TV. Only Gunsmoke had a longer run than Bonanza. From 1959 to 1973, Ben Cartwright and his boys rode across the small screen. Years later in syndication the series re-emerged as Ponderosa, and a handful of TV movies continued the tale into the 90’s.We never have grown tired of the genre that gave us such heroes as John Wayne and Clint Eastwood.

CBS started to pack in some extras in the previous release, but this one goes back to a bare-bones kind of title. There are promos and original ads but very little else in this collection. Again Season 10 is split into two releases. Look for a combo pack, and you’ll get all 30 episodes on eight discs. Do I wish CBS would release them together? Absolutely. But you might put up with it to have these classic shows on your video shelf. “At least that’s what I decided.”

Gino Sassani is a member of the Southeastern Film Critic's Association (SEFCA). He is a film and television critic based in Tampa, Florida. He's also the Senior Editor here at Upcomingdiscs. Gino started reviewing films in the early 1990's as a segment of his local television show Focus. He's an award-winning recording artist for Omega Records. Gino is currently working on his 8th album Merchants & Mercenaries. Gino took over Upcomingdiscs Dec 1, 2008. He works out of a home theater he calls The Reel World. Favorite films: The Godfather, The Godfather Part II, The Body Snatcher (Val Lewton film with Karloff and Lugosi, not the pod people film), Unforgiven, Gladiator, The Lion King, Jaws, Son Of Frankenstein, The Good, The Bad And The Ugly, and Monsters, Inc.
Richard Jewell Exclusive Interview With Kevin Sorbo For Lionsgate’s Bernie The Dolphin 2