Posted in: Podcasts by Gino Sassani on December 18th, 2019 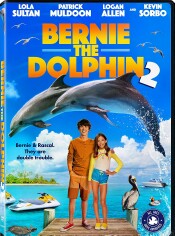 Lionsgate is going to offer you a nice Florida vacation this Christmas. It’s a short one, to be sure. You’re going to love spending some time with Bernie The Dolphin 2. Hang out with your old friends from the first film. I got to hang out with an old friend of ours at Upcomingdiscs. I had the chance to talk to Kevin Sorbo about the new film. It sounds like it was a blast. You can check out our chat by banging it here: Kevin Sorbo

You can also check out Kevin Sorbo’s website for some nice signed items just in time for Christmas. Check it out here: Kevin Sorbo Website

Gino Sassani is a member of the Southeastern Film Critic's Association (SEFCA). He is a film and television critic based in Tampa, Florida. He's also the Senior Editor here at Upcomingdiscs. Gino started reviewing films in the early 1990's as a segment of his local television show Focus. He's an award-winning recording artist for Omega Records. Gino is currently working on his 8th album Merchants & Mercenaries. Gino took over Upcomingdiscs Dec 1, 2008. He works out of a home theater he calls The Reel World. Favorite films: The Godfather, The Godfather Part II, The Body Snatcher (Val Lewton film with Karloff and Lugosi, not the pod people film), Unforgiven, Gladiator, The Lion King, Jaws, Son Of Frankenstein, The Good, The Bad And The Ugly, and Monsters, Inc.
Holiday Gift Guide Spotlight: CBS Classic Television Downton Abbey (2019) (Blu-ray)