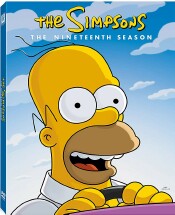 “Get ready for six hours of cartoons.”

Try around six days if you can binge them all. We’re talking about 300 hours of Simpsons cartoons in the can. The longest running show in prime time doesn’t feature cops, doctors, or lawyers. It’s hard to believe that The Simpsons have existed as long as the Fox network. While the series didn’t really begin until Fox’s second year, the characters were part of The Tracey Ullman Show, which did start the first year of Fox. Who could have guessed that an animated short from an otherwise horrible and doomed variety show would explode into such a phenomenon? The Simpsons have not only dominated the pop culture; they have placed everything else into context with their show. Like Doonesbury, it could be said that the only thing worse than being made fun of on The Simpsons is not being made fun of on The Simpsons. With that said, you’ll understand my warm feelings and appreciation for this show.

The head of the Simpson family is father Homer (Castellaneta). Homer’s pretty much a moron who happens to run a control panel at the local nuclear power plant. There’s nothing he wouldn’t do for a donut or a Duff’s beer. He happily meanders into the most outrageous situations with really no control over his family at all. Mother Marge (Kavner) loves her family but is usually frustrated by Homer’s mess-ups. She’s the smart one who manages to keep the family together. Son Bart (Cartwright) is a teenage bad boy on a skateboard. Whatever prank there is, he’s played it. He’s lazy and will go to great lengths to get out of work. Daughter Lisa (Smith) must have been adopted, but wasn’t, much to her own disappointment. She’s bright, hardworking, and talented. Too bad she ends up thwarted most of the time by her father or brother. There’s baby Maggie to wind up the family. Homer likes to hang with his friends at Harry’s Bar, where he can relax with a Duff in his natural element. The town of Springfield is populated with all sorts of colorful characters who often weave their lives intricately into the lives of the Simpson clan. Of course, this isn’t news to any of you. Love them, hate them or indifferent, everyone knows The Simpsons.

The 19th season of The Simpsons is a bit of a milestone for the show. It was the first season to air following The Simpson’s Movie, and there was a lot of speculation about how the film might connect with the episodes going forward. While there are some cool Easter eggs to be found, there is very little to connect the two, and you will not have to have seen the film to enjoy Season 19. You have to remember that the show is more than self-contained episodes. There are threads that leak through like character deaths, but most episode events have little impact on future episodes. In fact, the 19th season offers a bit of show controversy.

The fan controversy comes in the form of the episode That 90’s Show, where Simpson family history is rebooted. We’ve seen flashbacks of Homer and Marge in the 70’s in previous years. This season that early life and courtship has been moved to the 90’s, and we are told that new “origin” story here. I’m not sure why it upset so many people, because the same thing happens in the comics to beloved characters who had to navigate origins in the 1960’s and even 1930’s to allow them to be more accessible in the 21st century. I had no issue with it, but there was a vocal group out there for a while even calling for boycotts. As William Shatner once famously said: “It’s just a television show.”

Some of the better episodes from the season include The Homer Of Seville, where Homer discovers that he is a world class opera singer if he’s on his back. It’s all because of a medical issue. Homer ends up being a worldwide star, and famous operas are re-staged so Homer can be lying on a bed. Of course the fame goes to his head. Steve Buscemi guest stars as a crook who robs a bank while Marge is there. In many ways I Don’t Wanna Know Why The Caged Bird Sings is a bit of a riff on Dog Day Afternoon. The crook makes a deal with Marge. He’ll surrender and release the hostages if she’ll visit him in prison. Of course Marge accepts but has trouble following through with a set of its own consequences. The cast of Frasier star together in their same familial roles in Funeral For A Fiend. Sideshow Bob, voiced by Kelsey Grammer, tricks Bart into thinking he’s dead in another plot to kill Bart. David Hyde Peirce plays Bob’s brother, and the late great John Mahoney plays their father, just as they all did on Frasier. Bart finally does have a cow, man, in Apocalypse Cow. Bart joins 4H and is given a cow to care for and tries to win a ribbon. Bart wins the ribbon but discovers what is going to happen to his cow after the ceremony. He attempts to save his cow from the slaughterhouse. Finally there’s Any Given Sundance, where Lisa films a documentary on her family and enters it in a film festival. The family is proud until they realize Lisa made them look like idiots.

You get all 20 episodes on four discs. Each episode has a commentary. There’s an intro by Groening and foreign language bits.

There has been a bit of a backlog with releasing the show on DVD. Once upon a time Matt Groening decided that discs were on the way out and stopped the releases. This left holes in collector’s shelves that continued to grow as the series goes on and on. Finally, the demand got the releases started, so you’re getting Season 19 at around the time Season 31 is at its midpoint. “Doh!“

Gino Sassani is a member of the Southeastern Film Critic's Association (SEFCA). He is a film and television critic based in Tampa, Florida. He's also the Senior Editor here at Upcomingdiscs. Gino started reviewing films in the early 1990's as a segment of his local television show Focus. He's an award-winning recording artist for Omega Records. Gino is currently working on his 8th album Merchants & Mercenaries. Gino took over Upcomingdiscs Dec 1, 2008. He works out of a home theater he calls The Reel World. Favorite films: The Godfather, The Godfather Part II, The Body Snatcher (Val Lewton film with Karloff and Lugosi, not the pod people film), Unforgiven, Gladiator, The Lion King, Jaws, Son Of Frankenstein, The Good, The Bad And The Ugly, and Monsters, Inc.
Once Upon A Time In Hollywood (Blu-ray) Richard Jewell