Once Upon A Time In Hollywood (Blu-ray)

Posted in: Disc Reviews by Brent Lorentson on December 17th, 2019 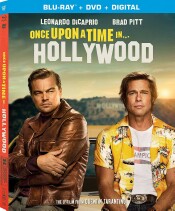 When it comes to Quentin Tarantino’s ninth feature film, Once Upon A Time in Hollywood, while it may be the most personal film that QT has put out, for some fans this may be his hardest to embrace.  For many fans, when they think of a Tarantino film the go-to titles are Pulp Fiction and Kill Bill, and there is nothing wrong with that, but if you’re going into this film with expectations for it to resemble those films, well, you’re going to be disappointed.  Instead what Tarantino delivers this time around is something more ambitious; while it may not be heavy on plot, what it thrives on is character and its ability to take us back in time to Hollywood in 1969 as it was closing in on the end of an era.  Other fans may be coming into this film expecting this to be a story that delves into Charles Manson and his followers because of the film having Sharon Tate in it; well, again, this is something where you need to put expectations aside and allow Tarantino to let his story unfold for you, because as expected, he takes this film into an unexpected direction.

The film is about Rick Dalton (Leonardo DiCaprio), a fading TV western star, and his stuntman and best friend Cliff Booth (Brad Pitt).  Rick is being offered an opportunity to make some films in Italy as a last-ditch effort to salvage his career, while Cliff is doing what he can on a day-to-day basis to stay afloat in Hollywood as a stuntman, though mostly he is Rick’s gopher and driver.  The relationship between these two men is the strength of the film despite them having little screen time together, but when the two do share the screen, it’s something special that’d I’d compare to seeing Newman and Redford together.  Tarantino knows what he has with these two together, but these characters are both on very different journeys in the film.  Rick is doing a guest spot on the hit western TV show Lancer, while Booth is doing work at Rick’s house and meeting a charismatic hitchhiker.

While all this is going on we also meet Rick’s next-door neighbor, Sharon Tate (Margot Robbie), who is married to famed Hollywood director Roman Polanski.  It’s the time spent with Tate where the film’s heart is, as we get to watch her going to parties at the Playboy Mansion, her hanging out at home, to her going off to see The Wrecking Crew, where we get to sit back and watch her as she enjoys her performance with an audience.  We know how her story ends in real life, and these moments with Tate are a gentle reminder that this was a real person, one who was on the cusp of stardom before she was horrifically murdered.

The production design on this film is subtle, detailed, and incredible.  Throughout the film we are seeing characters driving and walking the streets of 1969 Hollywood, and it looks the part.  On my second time watching the film, I allowed myself to look away from the main action in the film and just look at the theater marquees, the billboards in the background down to the bus stop benches; the attention to detail is incredible. This also gets me to the cinematography; this is a good-looking movie that was shot by one of the masters of the craft, Robert Richardson, who has worked with QT ever since Kill Bill (not including Death Proof).  When you consider they shot the Bounty Law segments on 16mm, then the beautiful driving sequences, to the theme on the movie lot and Spahn Ranch, there are a lot of different locations that are supposed to look as though they were shot on the same day and not on a closed set. This is impressive, but something again I didn’t pay much attention to till my second viewing.  Then there is the beautiful crane shot from when Dalton is in his pool rehearsing lines and how it moves over the house to go next door when Tate and Polanski are leaving for a party.  I thought this was a digital shot, but after seeing the bonus materials they discuss how the shot was pulled off, and I’m impressed.

Of course the dialog is fantastic, and the cast that was assembled here simply elevates the script. and because everyone is so good. they make it look easy.  What caught me off guard with the film is the amount of heart the film has, not so much as a romance, but the friendship between Dalton and Booth. They’re tough guys to the outside world, but cut to the moment they are sitting together watching Rick having his appearance in an episode of FBI, and it’s hard to not smile and like these guys.

The film is a very voyeuresque look at 1969 Hollywood, and as the film gets to its third act and the film jumps to the fateful day of the Manson slayings, well, it’s a bit anxiety-inducing.  We’ve gotten to love these characters, and when it comes to a Tarantino film, you never know what to expect.  It’s a divisive ending for sure; personally I loved what was done here, though of course I can understand why people disagree, because this is not a violent film up until the final act.  I’m curious where this film will find its place in history when it comes to the impressive f films from Tarantino, and with the threat of only one more film on the horizon, in my eyes it makes this film all the more precious.

Once Upon a Time in Hollywood is presented in the aspect ratio 2.40:1.  The 1080p image is arrived at with an AVC MPEG-4 codec at an average of 24 mbps.  This is a great looking transfer mostly because it was shot on 35 mm stock.  What’s all the more impressive is how well the other various film stocks hold up from the 16 mm black and white to even some of the Super 8 footage.  The depth with the blacks is incredible. When we get to see some of the old western footage, it looks clean, and most impressive is The Great Escape sequence that replaces DiCaprio with Steve McQueen.  The film has a very warm look to it, almost like it has a slight yellow hue to it.  With this transfer you’ll be able to see all the details that went into the production, from the costumes to even the dust of the old Spahn movie ranch.

The DTS-HD Master Audio 5.1 track is a pretty immersive track as it is filled with a lot of ambient noise from the streets of LA, to party-goers laughing and talking at the Playboy Mansion.  What’s fun is when the characters are in their cars and they have the radio cued, it’s as though we’re in the passenger seat with them. The dialog is clean and clear throughout.

Additional Scenes: (25:01) Here we get a couple of commercials shot for the film, also more footage from Bounty Law and Lancer along with some other scenes in the film.

Quentin Tarantino’s Love Letter to Hollywood: (5:00) A brief segment discussing what influenced Tarantino to do the film.

Bob Richardson-For the Love of Film (4:34) This segment delves into cinematographer Robert Richardson and what gets him coming back to shoot movies with Tarantino and his love for continuing to shoot on film.

Restoring Hollywood- The Production Design of Once Upon a Time in Hollywood: (9:18) This is the most impressive of the features as it shows everything that went into recreating Hollywood in 1969.

I’ve seen this numerous times at this point, and I continue to love this film, and it’s definitely one of my top films of the year.  It’s nearly three hours, but unlike the bloated Irishman on Netflix, Once Upon a Time in Hollywood flies by.  This is a must-watch for fans of Tarantino and for fans of cinema period.

Brent Lorentson is a horror writer and film critic based out of Tampa, Florida. With a BA in Digital Film, he co-wrote and co-directed Scavenger Hunt. His short stories have appeared in various horror anthologies. In 2019 his short script Fertile Blood will be a part of the anthology horror film Slumber Party. He is currently working on his first novel A Dark and Secret Place set to be released in late 2019. Favorite Films: Taxi Driver, Fight Club, I Saw the Devil, The Wild Bunch, Dawn of the Dead, A Clockwork Orange, Pulp Fiction, Heathers, The Monster Squad, and High Fidelity.
Killerman The Simpsons: Season 19